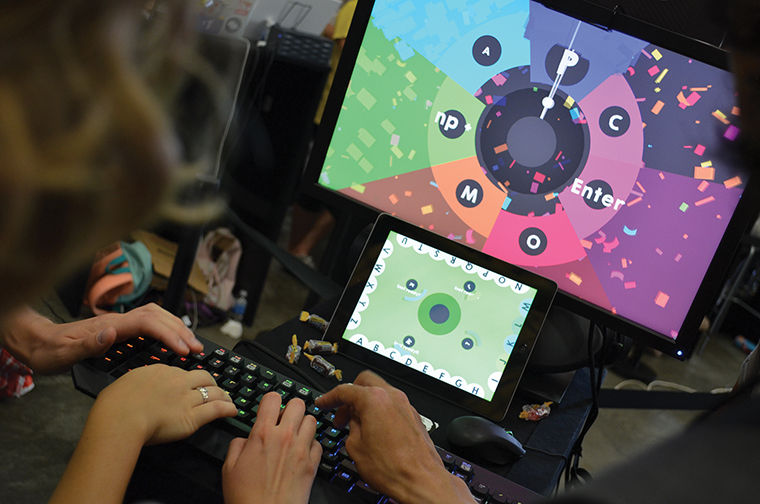 “Elbow Room” takes a simple concept and rolls with it: Put as many people as possible around one keyboard, have them all press one button each and the last one standing wins. It is easy to jump in and out, and gamers and non-gamers alike can enjoy it.

At the annual Game Developer’s Conference in San Francisco, California, there was tension between the old and new developers in game culture. The old see games as a rigid software discipline, and the new see games as an art form that everyone should explore and celebrate. A controversial post surfaced on Reddit in regards to the multitude of dyed hair colors and constant hugging by newer indie game developers in the industry. Despite the toxicity found in the comment thread, many were quick to dismiss it is as a sign of resistance in the inevitable change in the culture of the video game world.

The new and welcoming culture was represented in a party thrown by Venus Patrol—a website about games as art—and Wild Rumpus, a U.K.-based gaming collective that showcases distinctive games. From these two games emerged the “Everything is Going to be OK” party, where “Elbow Room” and a multitude of other games could be played.

“Elbow Room” is intended for at least 12 players gathered around a regular computer keyboard. There can be as many players as there are keys on the keyboard if they can all fit around it, so be prepared to get cozy while playing. When all players are ready, a circle representing their key rotates around a central circle with a radar line sweeping over each key. Players must press their button or take a point of damage when the line passes over their keys. Three strikes and you’re out. As players get knocked out, the line moves faster and faster until it is down to a duel between two players.

The game is visually striking because it uses bold colors on darker backgrounds and simple geometry. The result is a refreshingly minimalist look that does not fall into the “white with just a little bit of color” category.

The game flourishes in the environment of “Everything is Going to be OK.” Players were able to jump in and out at a moment’s notice, whether to get a drink, use the restroom or simply step back and observe new players jumping in. As a game, it is very fluid and easy for new players to start. The environment is what makes the game fun. It’s very simple but the idea of facing 12 other people is more than novel. It is almost unheard of for most daily gamers, especially in the context of local multiplayers.

As an installation, the game is even better. Because of its one-button focus, the game requires no explanation. It requires only a keyboard, so no special hardware needs to be installed or hauled around. It can theoretically be put on someone’s laptop and left on a table only to attract curious people.

Overall, “Elbow Room” is a game everyone should play. It represents a wonderful shift in gaming culture and is easy enough for anyone to begin immediately, yet challenging enough to be interesting for a long time, even with just one button. Save this game for your big parties, though—you will not get as much enjoyment out of it playing against a friend or two. “Elbow Room” is currently in pre-release. The release date has not been set, as of  press time.