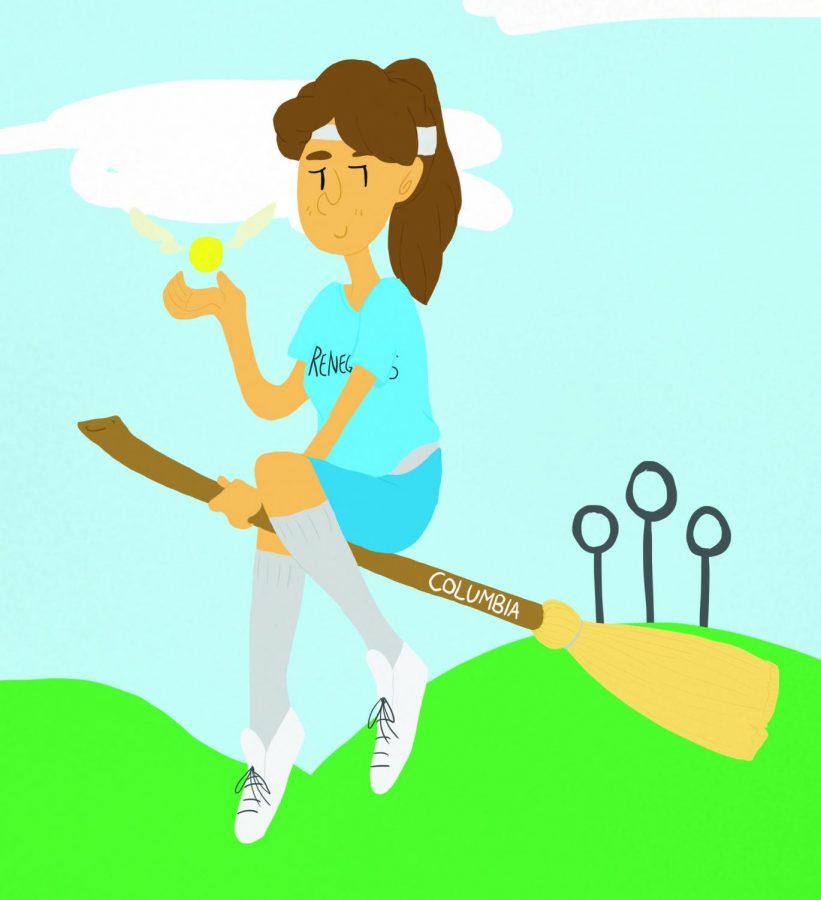 Break out the broomsticks—the Renegades is adding quidditch to its sports roster for the first time this fall semester.

Derived from the “Harry Potter” book series, quidditch is a co-ed contact sport with a mix of elements from rugby, dodge ball and tag.

“I asked the Muggles [Association] last year, ‘Are we [going to] do quidditch’?” McCluskey said. “Throughout all last year, nothing came up, so I volunteered to be on the e-board with them. Now my job is to run quidditch.”

McCluskey said one of the biggest challenges was figuring out a home for the quidditch team. The Renegades have also competed for funding from the Columbia Student Organization Council.

“We’ve decided, as of now, that we are [going to] be a part of [the] Renegades as a sports team,” McCluskey said. “But during the beginning part [of the process], we didn’t know if we would be funded through SOC and completely under Muggles, [or] under [the] Renegades as an original part.”

Despite the initial failures, McCluskey said he was passionate about making the fantasy-based sport a reality on campus because of his love for the “Harry Potter” book series.

“I’m a huge ‘Harry Potter’ fan,” McCluskey said. “I’m in the Muggles Association [and] I basically look like Ron Weasley. [‘Harry Potter’] is a big part of my life.”

According to the U.S. Quidditch website, a team is made up of seven players—three chasers, two beaters, one keeper and one seeker—who play with brooms between their legs at all times.

Chasers score goals—each worth 10 points—with a volleyball called the quaffle. Beaters use dodge balls called bludgers to disrupt the flow of the game by targeting other players.

When hit by a bludger, players are out of the game until they touch their own goal post. The seeker’s lone objective is to catch the snitch—a ball attached to the waistband of a snitch runner. Once the seeker catches the snitch, his or her team ends the game and receives 30 points. The keeper acts like a goalie, defending the hoops from chasers and stopping them from scoring goals.

According to the U.S. Quidditch website, the sport is played at more than 300 universities and high schools throughout North America, Australia and Europe.

Alex Benepe, founder and CEO of U.S. Quidditch, said the game has found its place on college campuses across the globe with 170 official teams—most of whom are official college club sports— and more than 4,100 registered players.

Megan Ammer, president of the Muggles Association, said McCluskey’s passion will allow the quidditch team to find success on the  playing field.

“Connor is only a sophomore,” Ammer said. “So [the quidditch team] has two [more] years under his leadership. I’m sure he will [also] train someone else to take over [with] the passion and drive that he has for quidditch.”

Ammer also said it is incredible to watch quidditch come alive as a real-life sport.

“I have lived for this book series and these movies for so long,” Ammer said. “Connor is extremely dedicated to the team, and it’s incredible just to watch him get involved.”

Benepe said the game has seen rapid growth in the last several years, a trend he said he expects to continue across the globe.

“[quidditch] is still growing very rapidly,” Benepe said. “Over the past four years, we’ve maintained a 40 percent growth rate annually [on] average. It’s very successful because of a few things—you have the ‘Harry Potter’ connection, which is obviously a valuable one, but I think what keeps people engaged in the game is how dynamic the sport is.”

Despite not being a fan of the “Harry Potter” series, Benepe said he fell in love with quidditch and does not think people need to have an interest in the book series to enjoy playing the game. In fact, Benepe said he knows plenty of serious athletes who play the game but do not read the books.

“I wouldn’t even consider myself a diehard [‘Harry Potter’] fan,” Benepe said. “I mostly got into [quidditch] because my friend suggested we try playing it. We try to tailor the sport to a wide variety of backgrounds. I happen to know personally a number of very serious athletes in the league who’ve never read the books and they love playing it. It’s also a co-ed full-contact sport, so there is literally no other sport like it in that regard alone. You can have men and women tackling each other. That is not something you can get anywhere else.”