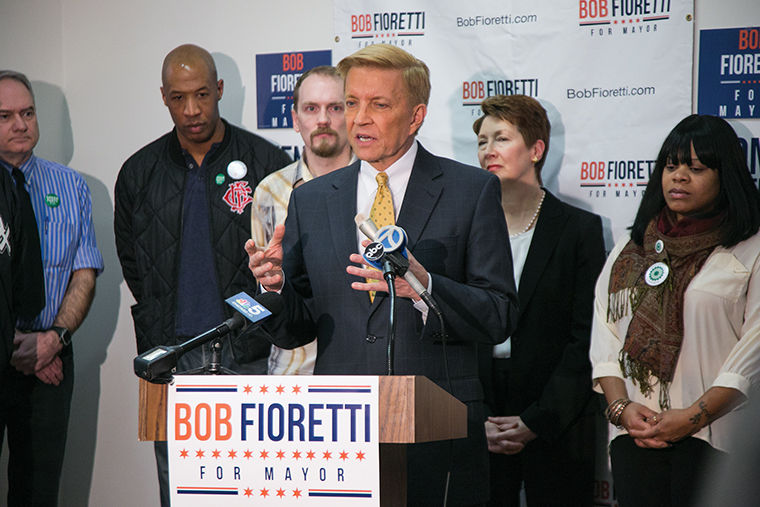 “I’m proud to stand here with the Green Party as a candidate who has been endorsed by the Green Party for mayor of the City of Chicago because their concerns are my concerns,” Fioretti said at the

Phil Huckleberry, chair of the Green Party, said Fioretti is committed to upholding the party’s four pillars: social justice, non-violence, grassroots democracy and ecological wisdom, which he said “are being violated under the auspices of Mayor Rahm Emanuel’s administration.”

Huckleberry pointed to the city’s high crime rate, the “tens of thousands” of Chicagoans without access to recycling, the 49 Chicago Public Schools that were closed in 2013 and the district’s lack of an elected school board as examples of Emanuel’s failings. CPS is the only school district in Illinois without an elected school board, and Emanuel, who makes all appointments to CPS, has openly opposed it.

“On all of these things, it’s been Bob Fioretti that has been on the forefront of the fight, especially against this mayor,” Huckleberry said. “There is this old saying in the Green Party, ‘Neither left nor right, but out in front,’ and Bob Fioretti has consistently been out in front on these issues.”

“I want a mayor who is of this city, who knows how it is to have constituents who are hard-working people and who will look out for everyone, not just the people who can afford to write checks,” Holloway said. “I’ve been here my whole life. I’d like to have a future here, and I’m going to vote for Bob Fioretti because I think he’s the mayor that gives us the best shot.”

Huckleberry said that while the party cannot offer much by the way of money, they can bring votes. In recent races where the party has run candidates for city office, they have recieved 10 percent of the vote. That is sizable in a five way race, he said.

Huckleberry and Holloway both have children who attend different CPS schools. They raised concerns about the school board failing to address issues of cleanliness and understaffing, and they said the board could even be causing these issues.

Huckleberry, a community representative on the Local School Council at Prussing Elementary, 4650 N. Menard Ave., said the school is “filthy” because it only has two full-time janitors to service 600 students on two floors. Built in the 1920s, Prussing Elementary is heated by an outdated boiler that has caused temperatures to soar to 90 degrees in the winter, he said.

By orders from the engineer, they have kept the windows closed in the overheated classrooms “because the boilers will simply make it hotter for the rest of the school,” Huckleberry said. Both the custodians and the engineer are employed by contractor Aramark.

Being a man used to intense heat, Holloway said that he “almost melted” while volunteering in his school’s library.

“This is what four years of Rahm Emanuel have given us,” Huckleberry said. “If it’s true that in 1979 it was the snow that drove Michael Bilandic out of office and ushered Jane Byrne in, then in 2015 it’s the filthy classrooms and everything else that Rahm Emanuel has done for the students of Chicago that should cause him to be kicked out and to cause us to vote Bob Fioretti in.”

When asked what he thought of mayoral candidate and Cook County Commissioner Jesus “Chuy” Garcia calling himself the “neighborhood guy” at the mayoral debate before the Chicago Tribune Editorial Board on Jan. 27, Fioretti replied, “Which neighborhood? When? Where? Where was he? What has he done in our neighborhoods? I really don’t remember him when I was in Pilsen when the schools were being closed. He wasn’t there … We didn’t see him at any hearing before the administrative law judges … I’m not sure which neighborhoods he’s representing.”