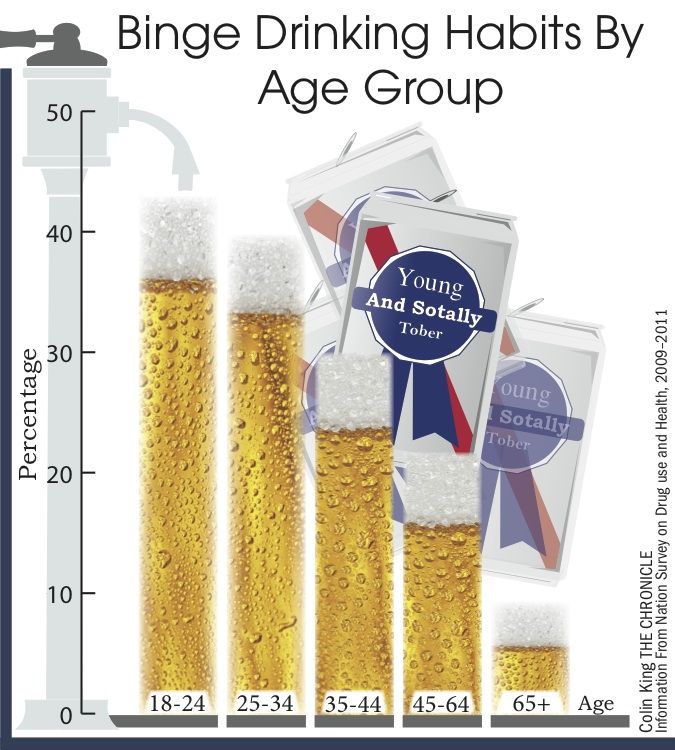 It is common for young adults to first experiment with alcohol in their college years, but given the stresses that come with the transition to college and their newfound freedom, those students are at risk of developing unhealthy drinking habits.

Excessive drinking, binge drinking and alcohol dependence were most common among young adults aged 18–24 from 2009–2011, according to a Nov. 20 report from the Centers for Disease Control and Prevention.

The purpose of the study was to examine the relationship between excessive drinking and alcohol dependence in the U.S. to understand the characteristics of these behaviors and of how to address such problems, said Robert Brewer, who leads the Alcohol Program in the National Center for Chronic Disease Prevention and Health Promotion at the CDC.

College students are subject to a number of environmental factors at this age that—mixed with student culture—could make them more susceptible to developing unhealthy drinking habits, said Sarah Benton, a licensed counselor at Insight Counseling in Ridgefield, Connecticut, and author of “Understanding the High-Functioning Alcoholic.”

“It’s developmentally a time when there’s a lot of experimentation, where young adults are trying to find themselves and trying to figure out their identity [while at the same time] experimenting with alcohol and drugs,” Benton said.

Excessive drinking and binge drinking are major problems on college campuses not only because of the negative physiological effects such actions could yield, but also because of the kinds of accidents that can happen relating to alcohol consumption, including drunk driving, falling or assaults, Benton said.

The limits that qualify as binge drinking include at least four drinks for women and at least five drinks for men on a single occasion, according to the report.

“When I heard what was considered to be the appropriate drinking numbers, I thought it was a joke,” Benton said. “I thought it was completely unrealistic, and as I’ve gone through my own process, gotten sober and become an addictions specialist. The numbers make sense to me now, but when you’re a binge drinker, you don’t count. You drink until you’re drunk and you don’t quantify it.”

It is important for someone to count how many drinks he or she is having so as to be aware of how much the body can tolerate, prevent blacking out, memory lapses and passing out from overconsumption, Benton said.

It is often assumed that people with excessive drinking habits are also alcoholics, but the two are mutually exclusive, according to the report. Ninety percent of excessive drinkers ages 18 or older did not meet the report’s criteria for being alcohol dependent.

“The majority of people who are drinking to excess are not alcohol dependent,” Brewer said. “And that’s why we called in our recommendations for a more comprehensive approach to dealing with this problem, which includes the availability of high-quality treatment for those who need it, but then incorporates other strategies [to reduce binge drinking].”

George Koob, director of the National Institute on Alcohol Abuse and Alcoholism, said he disagrees with this distinction between excessive drinking and alcohol dependency. He said alcohol use disorders are a continuum, and someone could still need treatment in the earlier stages of unhealthy drinking.

“Some of those excessive drinkers need to be treated,” Koob said. “They need treatment and you don’t want to restrict [it]—the CDC didn’t say that, but it comes across like we only need to treat alcoholics, but that’s not true.”

“The reality is as devastating a problem as alcohol dependence is; most of the health and social harms related to excessive drinking do not relate to the dependent population,” Brewer said. “It’s not a question of minimizing the importance of either one. It’s more to highlight that they are both important but that we need to be thinking of different ways to address excessive drinking in those who are not dependent.”