Freetember art classes hope to leave a mark on Chicago 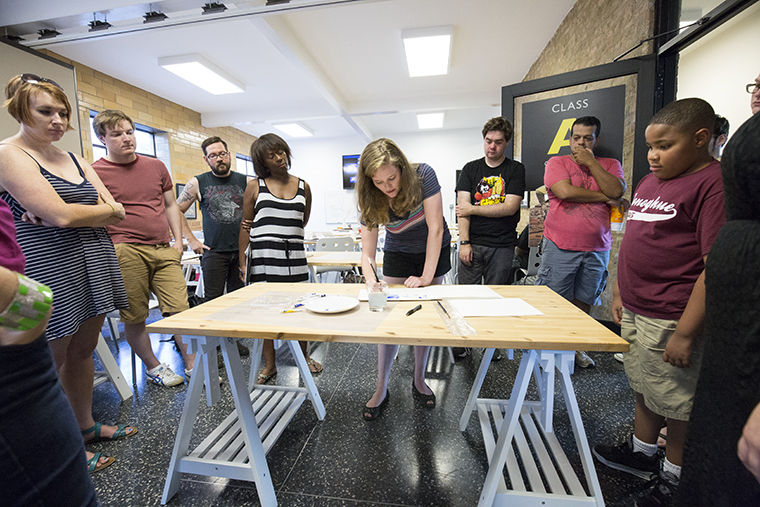 The International School of Comics is offering free art classes throughout the month of September as part of a campaign called Freetember.

The idea for the  event was born from multiple sources, but all of them lead back to spreading the word about the school’s Chicago campus and offering a chance for residents to sit in on a free art class.

Douglas Klauba, a local Chicago artist and teacher at the International School of Comics, has been on staff for nearly two years and said the staff is excited to show off the school’s great program.

The event was in part a product of Emma Rand, the school’s Student Services Director, who saw Freetember as a marketing tool.

“What better way to interest people in something than to give it to them for free?” Rand said. “Nobody knew about us in Chicago, so Freetember is meant to get our name out there and open our doors to the Chicago community.”

Klauba said the idea for his class,  the Executive Drawing workshop, stems from a conversation he had with a friend. The friend, who is an attorney but loves art, wanted the opportunity to take a life drawing class without having to enroll as a full-time student.

“I pitched my idea for Freetember as a drawing class once a week—maybe even once a month from here on out—for working professionals that aren’t commercial artists or fine artists but love art,” Klauba said.

Located at 1651 W. Hubbard St., the school was founded in Italy in 1979 by artist Dino Caterini and has since established 10 locations worldwide: nine in cities across Italy, including Rome and Naples and one in Chicago. The school opened its Chicago location in early 2013 and officially began offering classes in April 2014.

Even though Freetember is geared toward the school gaining more attention in Chicago’s renowned art community, the event is also a way of offering people with full-time jobs a chance to attend classes, be creative and release their inner artist.

Rand said on the first night of class she asked a group of students which of them considered themselves artists and only five of the attendees raised their hands.

“I was like, ‘Well, you’re all here for an art class, so you must all be artists in some way,’” Rand said. “So when I say ‘artist,’ I mean do you doodle in your notebooks at school or are you being paid a million dollars a day to make abstract paintings? Everyone between that I consider an artist.’ Then everybody raised their hands.”

According to Rand, it is all about learning and changing your perspective about art.

“We wouldn’t have this if it wasn’t for people thinking outside of the box,” Rand said. “We have to get everybody used to the idea that art can be anything and everything and you want it to change.”

Jamie Primack, a student at the school, attended Rand’s watercolor class even after her regular classes.

“Part of it was because it was free,” Primack said. “I have this philosophy that you can never learn too much, because you can’t unlearn, so I’ve decided to go to all of them.”