Mark Kelly encourages Near South to ‘own it’ 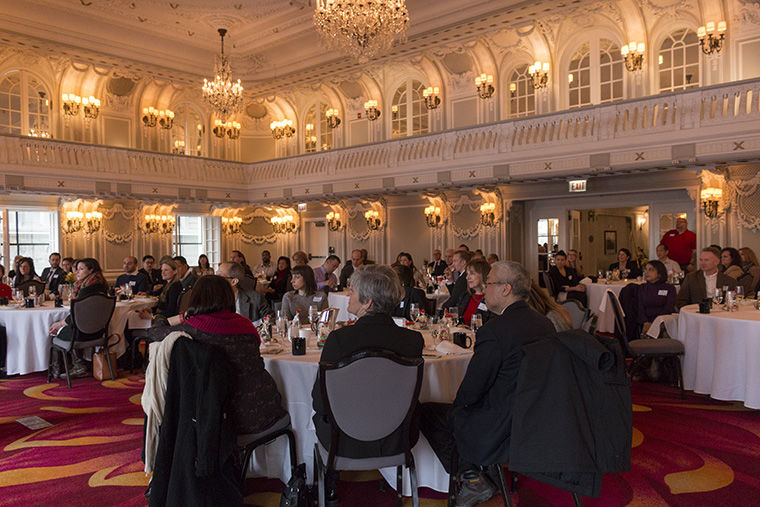 The Near South Planning Board Winter Breakfast Program was held Dec. 14 at the Renaissance Blackstone Hotel, 636 S. Michigan Ave. Commissioner of the Chicago Department of Cultural Affairs and Special Events Mark Kelly spoke at the event.

From music venues Buddy Guy’s and the Jazz Showcase to festivals like SummerDance to innovative colleges and universities, the Near South has been a driving force in cultural vitality of Chicago, said Mark Kelly, commissioner of Chicago Department of Cultural Affairs and Special Events.

Kelly addressed the Near South Planning Board Dec. 14 at the Renaissance Blackstone Hotel, 636 S. Michigan Ave., and encouraged locals to value the area’s historical and cultural significance and push it forward. The Near South is an area located just south of the Loop from Lake Michigan on the east to the Chicago River on the west.

“The Near South is a hot district again, but I want to argue [that you need to] understand your legacy, understand that this was one of the most culturally vital and important centers in the world, understand it has always been a place of innovation and change,” Kelly said.

Kelly, formerly Columbia’s vice president of Student Success who served the college for 32 years and stepped into his new position as DCASE Commissioner Aug. 5, also discussed his first four months in office and what he plans to accomplish in the upcoming year.

“I feel like a kid in a candy store,” Kelly said. “Here in Chicago, one of the greatest cultural powerhouses in the world, and I have the honor of making arts and culture ever more centered in the lives of our citizens.”

Chicago’s art sector currently contributes over $2 billion annually to Chicago’s economy with DCASE’s large-scale summer events contributing more than $250 million, Kelly said. He added that about 2,000 programs and events bring in more than 10 million residents and visitors, including the free summer concerts and films that brought in one million people.

Kelly said he is looking to revamp Chicago’s Jazz festival to continue to support the city’s jazz community and venues.

He added that DCASE will be declaring 2017 as the “year of public art in Chicago” by creating events and exhibitions to celebrate public art like Cloud Gate—commonly known as The Bean—in Millennium Park, the Wabash Arts Corridor, the Picasso sculpture in Daley Plaza and the old Wall of Respect that was created in 1967 and demolished in 1971.

“Chicago will be better known around the world as one of the greatest repositories of public art,” Kelly said.

As far as Near South events, Kelly plans on bringing fresh ideas to the SummerDance series, a free annual event celebrating dances from different cultures. He said he wants to make the festival a competition and bring it to the local neighborhoods before gathering in Millennium Park for a larger festival.

DCASE values art as a way of building communities and bringing fresh perspectives to difficult and complex issues, Kelly said.

“[DCASE] believes that artistry and creativity are as fundamental as the air we breathe,” Kelly said. “Creativity is neither a luxury nor a recreation; it is how we become more human. That is the arts and culture that define the character of great cities.”