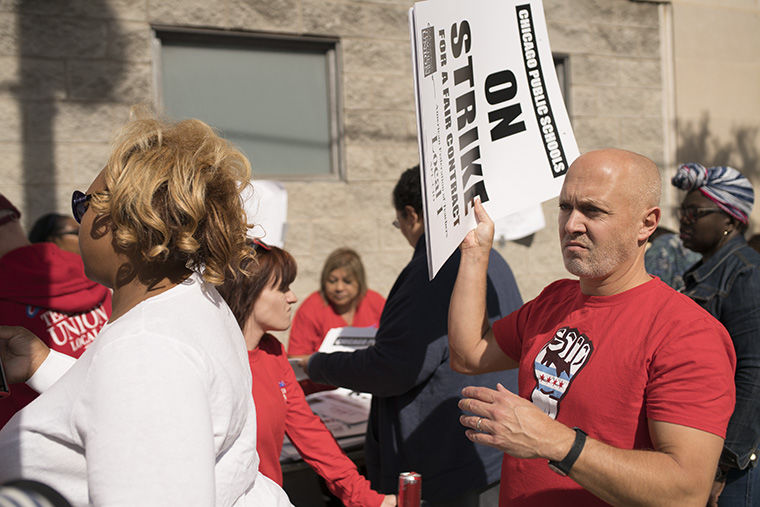 At the Chicago Teachers Union strike headquarters, 1642 W. Van Buren St., teachers handed out signs on Oct. 10 to teachers preparing for the possible CTU strike the following day. The strike never occurred due to a tentative agreement CPS offered CTU minutes before the midnight deadline.

Minutes before the midnight deadline Oct. 10, after many teachers had already collected strike materials, the Chicago Teachers Union announced it would not strike the following day because of a tentative agreement reached with Chicago Public Schools.

CTU announced Sept. 28 it would strike Oct. 11, which would have been the third time since Mayor Rahm Emanuel took office, if CPS did not offer a better contract before then. This decision came after more than a year of contract negotiations between CTU and CPS.

The agreement, which is not yet final, gives teachers raises, secures the pensions of those already employed by CPS, reduces class sizes and offers job security through reduced layoffs. Other elements of the agreement include a reduction in testing and paperwork, the addition of teachers’ assistants in kindergarten through second grade classrooms with 32 or more students, added prep time for elementary teachers and an early retirement initiative, according to an Oct. 12 emailed statement from CPS.

CPS said in the statement that the negotiation will save the district $300 million over the life of the contract.

“This agreement is a fair deal to all sides and is the product of thoughtful compromise on both sides to do right by Chicago students,” CPS said in the emailed statement. “For the district, not only does this deal provide teachers with a raise and secure their pensions, it also achieves meaningful savings that helps stabilize our finances.”

CTU still needs to schedule a vote with the full CTU membership to approve the Oct. 10 agreement.

Laura Baginski, marketing director at the Neighborhood Parents Network and parent to a preschooler in CPS, said many parents in the network expressed frustrations with the midnight deadline.

“[The late notice] makes it very difficult to plan what you’re going to do for childcare in case there is a strike,” Baginski said. “Not everyone has a flexible schedule where they’re able to turn on a dime and figure out what they’re going to do. Some parents felt their kids were kind of held hostage in the situation while the teachers and CPS figured out what they were going to do.”

Joe Powers, principal at Jones College Prep, 700 S. State St., in the South Loop, said he is relieved the strike was avoided and an agreement was made.

“The most important thing is we have a stable agreement and are not looking at a strike every four years,” Powers said. “I was very pleased they were able to do this without the strike, and we did not fall into that pattern that every time a contract was up for renewal, we were facing a major strike.”

However, Peter Cunningham, executive director of Education Post, an online publication advocating for schools, strikes are not over.

“I worry it will be [an endless cycle of strike threats],” Cunningham said. “There’s a lot of expectations teachers have that all these working conditions will change, and I don’t think that’s going to be true. They’re getting the salaries they want, but at a certain point, you can’t sustain it. They’re just going to have to work a lot harder to trust each other and collaborate instead of always fanning the flames of distrust.”

Baginski said while the strike threats might be frustrating, she and her colleagues understand Chicago teachers’ concerns.

“I want my son’s teachers to be happy and well-paid,” Baginski said. “Sometimes things need to get done in a way you wouldn’t prefer, but the endgame is you know your child’s teachers are being taken care of, and that’s important.”