The cost of being trans: the psychological, financial & legal toll of identity affirmation 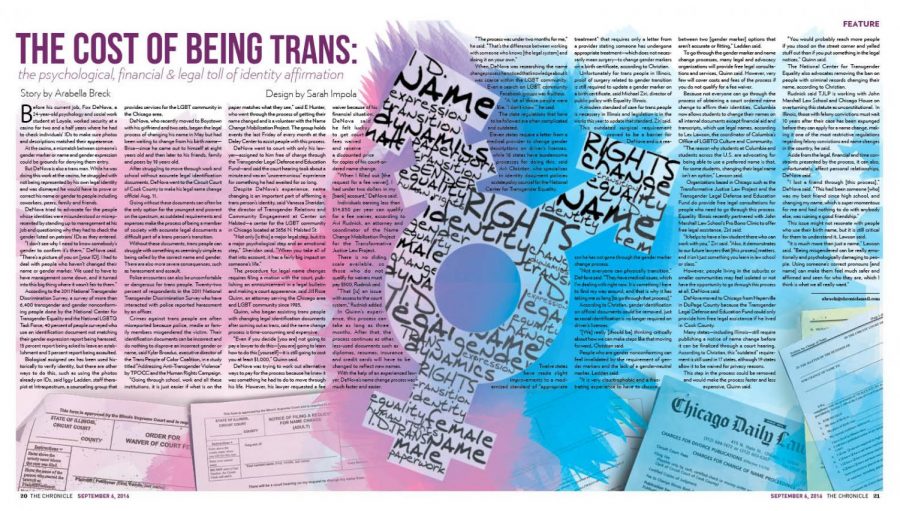 The cost of being trans: the psychological, financial & legal toll of identity affirmation

Before his current job, Fox DeNova, a 24-year-old psychology and social work student at Loyola, worked security at a casino for two and a half years where he had to check individuals’ IDs to make sure photos and descriptions matched their appearance.

At the casino, a mismatch between someone’s gender marker or name and gender expression could be grounds for denying them entry.

But DeNova is also a trans man. While he was doing this work at the casino, he struggled with not being represented by his own legal identity and was dismayed he would have to prove or correct his name or gender to people including coworkers, peers, family and friends.

DeNova tried to advocate for the people whose identities were misunderstood or misrepresented by standing up to management at his job and questioning why they had to check the gender listed on patrons’ IDs as they entered.

“I don’t see why I need to know somebody’s gender to confirm it’s them,” DeNova said. “There’s a picture of you on [your ID]. I had to deal with people who haven’t changed their name or gender marker. We used to have to have management come down, and it turned into this big thing where it wasn’t fair to them.”

Biological assigned sex has been used historically to verify identity, but there are other ways to do this, such as using the photos already on IDs, said Iggy Ladden, staff therapist at Intraspectrum, a counseling group that provides services for the LGBT community in the Chicago area.

DeNova, who recently moved to Boystown with his girlfriend and two cats, began the legal process of changing his name in May but had been waiting to change from his birth name—Brisa—since he came out to himself at eight years old and then later to his friends, family and peers by 18 years old.

After struggling to move through work and school without accurate legal identification documents, DeNova went to the Circuit Court of Cook County to make his legal name change official Aug. 11.

Going without these documents can often be the only option for the youngest and poorest on the spectrum, as outdated requirements and expenses make the process of being a member of society with accurate legal documents a difficult part of a trans person’s transition.

Without these documents, trans people can struggle with something as seemingly simple as being called by the correct name and gender. There are also more severe consequences, such as harassment and assault.

Police encounters can also be uncomfortable or dangerous for trans people. Twenty-two percent of respondents in the 2011 National Transgender Discrimination Survey who have interacted with police reported harassment by an officer.

Crimes against trans people are often misreported because police, media or family members misgendered the victim. Their identification documents can be incorrect and do nothing to disprove an incorrect gender or name, said Kylar Broadus, executive director of the Trans People of Color Coalition, in a study titled “Addressing Anti-Transgender Violence” by TPOCC and the Human Rights Campaign.

“Going through school, work and all these institutions, it is just easier if what is on the paper matches what they see,” said E Hunter, who went through the process of getting their name changed and is a volunteer with the Name Change Mobilization Project. The group holds events the last Friday of every month at the Daley Center to assist people with this process.

DeNova went to court with only his lawyer—assigned to him free of charge through the Transgender Legal Defense and Education Fund—and said the court hearing took about a minute and was an “unceremonious” experience for something he had awaited for so long.

Despite DeNova’s experience, name changing is an important part of affirming a trans person’s identity, said Vanessa Sheridan, the director of Transgender Relations and Community Engagement at Center on Halsted—a center for the LGBT community in Chicago located at 3656 N. Halsted St.

“Not only [is this] a major legal step, but it is a major psychological step and an emotional step,” Sheridan said. “When you take all of that into account, it has a fairly big impact on someone’s life.”

The procedure for legal name changes requires filing a motion with the court, publishing an announcement in a legal bulletin and making a court appearance, said Jill Rose Quinn, an attorney serving the Chicago area and LGBT community since 1985.

Quinn, who began assisting trans people with changing legal identification documents after coming out as trans, said the name change process is time-consuming and expensive.

“Even if you decide [you are] not going to pay a lawyer to do this—[you are] going to learn how to do this [yourself]—it is still going to cost you at least $1,000,” Quinn said.

DeNova was trying to work out alternative ways to pay for the process because he knew it was something he had to do to move through his life. However, his lawyer requested a fee waiver because of his financial situation. DeNova said he felt lucky to get court fees waived and receive a discounted price for copies of his court-ordered name change.

“When I filled out [the request for a fee waiver], I had under two dollars in my [bank] account,” DeNova said.

Individuals earning less than $14,850 per year can qualify for a fee waiver, according to Avi Rudnick, an attorney and coordinator of the Name Change Mobilization Project for the Transformative Justice Law Project.

There is no sliding scale available, so those who do not qualify for waivers must pay $500, Rudnick said.

“That [is] an issue with access to the court system,” Rudnick added.

In Quinn’s experience, this process can take as long as three months. After that, the process continues as other, less-used documents such as diplomas, resumes, insurance and credit cards will have to be changed to reflect new names.

With the help of an experienced lawyer, DeNova’s name change process was much faster and easier.

“The process was under two months for me,” he said. “That’s the difference between working with someone who knows [the legal system] and doing it on your own.”

When DeNova was researching the name change process he noticed that knowledge about it was scarce within the LGBT community. Even a search on LGBT community Facebook groups was fruitless.

The state regulations that have to be followed are often complicated and outdated.

Eleven states require a letter from a medical provider to change gender descriptions on driver’s licenses, while 18 states have burdensome processes for doing this, said Arli Christian, who specializes in identity document policies as state policy counsel for the National Center for Transgender Equality.

Twelve states have made slight improvements to a modernized standard of “appropriate treatment” that requires only a letter from a provider stating someone has undergone appropriate treatment—which does not necessarily mean surgery—to change gender markers on a birth certificate, according to Christian.

Unfortunately for trans people in Illinois, proof of surgery related to gender transition is still required to update a gender marker on a birth certificate, said Michael Ziri, director of public policy with Equality Illinois.

A modern standard of care for trans people is necessary in Illinois and legislation is in the works this year to update that standard, Ziri said.

This outdated surgical requirement proved to be a barrier for DeNova and is a reason he has not gone through the gender marker change process.

“Not everyone can physically transition,” DeNova said. “They have medical issues, which I’m dealing with right now. It is something I have to find my way around, and that is why it has taking me so long [to go through that process].”

According to Christian, gender identification on official documents could be removed, just as racial identification is no longer required on driver’s licenses.

“[We] really [should be] thinking critically about how we can make steps like that moving forward,” Christian said.

People who are gender nonconforming can feel invalidated by the requirement of gender markers and the lack of a gender-neutral marker, Ladden said.

“It is very claustrophobic and a frustrating experience to have to choose between two [gender marker] options that aren’t accurate or fitting,” Ladden said.

To go through the gender marker and name change processes, many legal and advocacy organizations will provide free legal consultations and services, Quinn said. However, very few will cover costs and fees of the process if you do not qualify for a fee waiver.

Because not everyone can go through the process of obtaining a court ordered name change to affirm their identities, Columbia now allows students to change their names on all internal documents except financial aid and transcripts, which use legal names, according to Lex Lawson, the coordinator of the college’s Office of LGBTQ Culture and Community.

“The reason why students at Columbia and students across the U.S. are advocating for being able to use a preferred name is that, for some students, changing their legal name isn’t an option,” Lawson said.

Organizations based in Chicago such as the Transformative Justice Law Project and the Transgender Legal Defense and Education Fund do provide free legal consultations for people who need to go through this process. Equality Illinois recently partnered with John Marshall Law School’s Pro Bono Clinic to offer free legal assistance, Ziri said.

“It helps to have a law student there who can work with you,” Ziri said. “Also, it demonstrates to our future lawyers that [this process] matters, and it isn’t just something you learn in law school or class.”

However, people living in the suburbs or smaller communities may feel isolated or not have the opportunity to go through this process at all, DeNova said.

DeNova moved to Chicago from Naperville in DuPage County because the Transgender Legal Defense and Education Fund could only provide him free legal assistance if he lived in Cook County.

Many states—including Illinois—still require publishing a notice of name change before it can be finalized through a court hearing. According to Christian, this “outdated” requirement is still used in 17 states, although 19 states allow it to be waived for privacy reasons.

This step in the process could be removed and would make the process faster and less expensive, Quinn said.

“You would probably reach more people if you stood on the street corner and yelled stuff out than if you put something in the legal notices,” Quinn said.

The National Center for Transgender Equality also advocates removing the ban on people with criminal records changing their name, according to Christian.

Rudnick said TJLP is working with John Marshall Law School and Chicago House on overturning this statute as unconstitutional.  In Illinois, those with felony convictions must wait 10 years after their case has been expunged before they can apply for a name change, making it one of the most restrictive regulations regarding felony convictions and name changes in the country, he said.

Aside from the legal, financial and time constraints presented by the process, it can also have major effects on personal relationships, DeNova said.

“I lost a friend through [this process],” DeNova said. “This had been someone [who] was my best friend since high school, and changing my name, which is super momentous for me and had nothing to do with anybody else, was ruining a good friendship.”

This issue might not resonate with people who use their birth name, but it is still critical for them to understand it, Lawson said.

“It is much more than just a name,” Lawson said. “Being misgendered can be really emotionally and psychologically damaging to people. Using someone’s correct pronouns [and name] can make them feel much safer and affirmed and seen for who they are, which I think is what we all really want.”