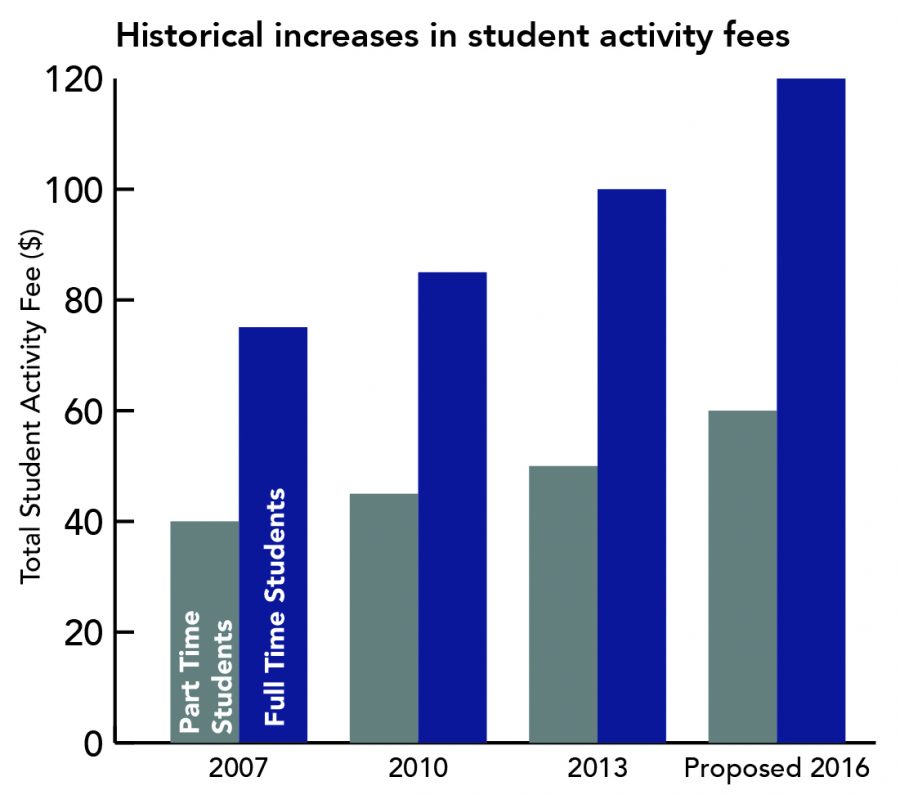 The student activity fee will increase up to $20 for the Fall 2016 Semester, resulting in more student spaces to showcase  work and hold events.

With a unanimous vote, the Student Government Association approved the Office of Student Success’ proposal Feb. 2 to increase the per-semester student activity fees, which support student programs, events and exhibitions, from $100 to $120 for full-time students and from $50 to $60 for part-time students.

“If students want more, it costs more,” said Mark Kelly, vice president of Student Success. “We are incredibly good stewards of those precious funds and making this a compelling student experience beyond the classroom.”

The increased fees could raise the overall student activity fee budget by about $226,000, according to the proposal. The budget had been affected by cuts necessitated by the declining enrollment at the college.

Kelly said some of the funding will be used to operate five spaces and initiatives to better showcase student work and create a sense of community, including the A + D Leviton Gallery, C101, Film Row Cinema, Wabash Arts Corridor, Papermaker’s Garden, Sculpture Garden and the Book and Paper Center.

The Papermaker’s Garden will be relocated to share space with the Sculpture Garden at the corner of Wabash Avenue and 11th Street as the college makes room for the new Student Center.

“Our highest priority is building a community and showcasing students’ bodies of work,” Kelly said.

Subject to an agreement with Student Life and SGA, the college will reassess the need to increase or maintain the fee every two years instead of the previous three years. Kelly said this agreement will allow the college to make any necessary changes to the fee after the Student Center’s expected completion in the Fall 2018 Semester.

Approximately 40 percent of the additional funds will be distributed to student organizations and leaders, and 50 percent to the Department of Exhibitions and Performance, Student Spaces and ShopColumbia, according to the proposal.

“We are students, too,” Kooda said. “We totally understand. When I first heard they wanted to raise the fee, I was like ‘there better be a good reason,’ and there definitely is.”

Ayrika Craig, a senior advertising major and community director for the Student Organizations Council, said organizations continue to grow in size and new ones are created daily.

“Students [who] are mad about paying more money don’t realize all the resources here on campus,” Craig said. “[Students] are going to get all of that money back—whether it is through the experiences, the free food [or] networking with people.”

Ten percent of the additional funds will be distributed to fitness, athletics and recreation at the college, according to the proposal.

Mark Brticevich, coordinator of fitness, athletics and recreation, said the student activity fee funds everything the department does, such as coordinating programs and gym hours. The increase will allow the department to make up for a loss in enrollment, which resulted in a reduction in funding.

He also said a large part of the budget supports student workers in the department, who received a city-wide minimum wage increase for the 2015–2016 academic year.

“Getting this increase will at least stop the bleeding [of limited funds],” Brticevich said.

Kelly said he hopes the new funds will encourage more students to join organizations and that more spaces will become accessible for students to show off their work regardless of their major.

“Students come here [for] the experience beyond the classroom,” Kelly said. “Columbia is not just a collection of classes and curriculum; it is an experience, and the student activity fee brings that