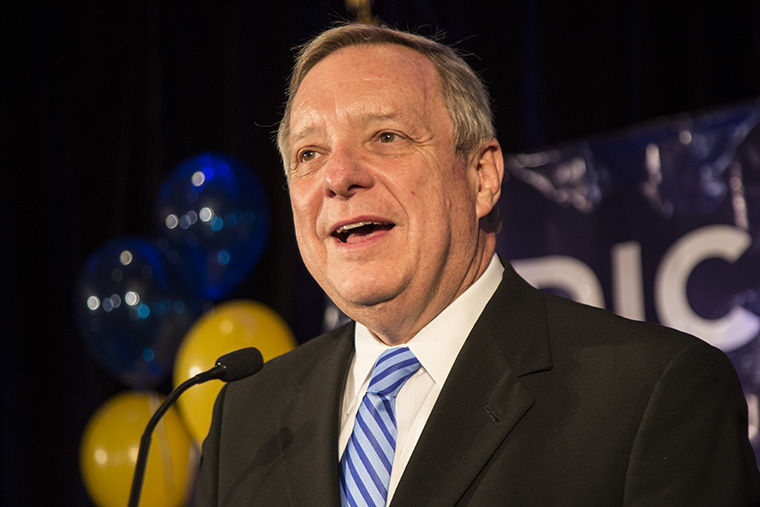 Durbin speaks to his supporters at Westin Hotel, 320 N. Dearborn Street in Chicago, at his election party following his victory over Jim Oberweis.

Several major news outlets such as CBS2, Fox News and NBC reported Durbin’s victory shortly after polls closed at 7 p.m., but the incumbent did not officially claim his victory until around 9:30 p.m.

Durbin said the campaign results are reflective of what U.S. and Illinois residents truly want.

Durbin ran an aggressive campaign throughout the race. As of Oct. 15, he had spent  $9.7 million on his campaign, while Oberweis had spent $2.2 million, according to Nov.4 Chicago Tribune report.

Durbin said politicians have alienated average citizens from voting throughout the years and he was determined to change that with this campaign.

“This was a coordinated campaign,” Durbin said. “It was an effort to bring all of us together that share the same political values. And we brought everyone together—black, white, brown, young, old, gay and straight—all together. That is what gives our nation strength and that is what gives Illinois strength.”

With more than 70 percent of precincts reporting, Durbin had 57 percent of the vote to Oberweis’ 38 percent. Libertarian Sharon Hansen had 3 percent. In each of Durbin’s previous three victories, he won by 15 percentage points or more, according to a Nov. 4 Chicago Tribune report.

Durbin said he is confident about the future of Illinois.