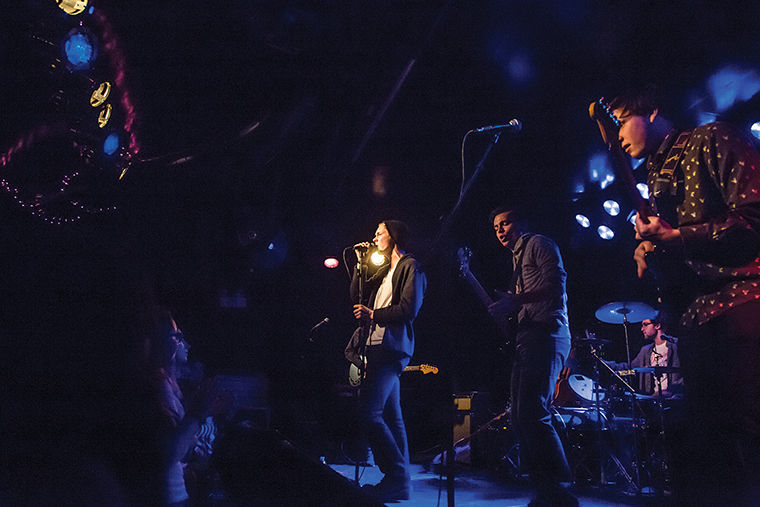 Brought together by chance, American Idol season 9 winner Lee DeWyze, The Tragic Thrills and one of Columbia’s student bands, Friday Pilots Club, were an outstanding lineup for the Feb. 13 show at the Beat Kitchen, 2100 W. Belmont Ave.

Upon entering the venue, fans knew they were in for an intimate evening as a dimly lit atmosphere set an underground vibe.

The Friday Pilots Club opened the show with enthusiasm and spirit as they prepared the crowd for a night of fan favorites and new releases. Originally from Batavia, a western suburb of Chicago, the Friday Pilots Club drew in loyal fans from home as well as many Columbia students who have followed the band since it released its EP, Dreams, in October.

After transporting all of its instruments in the back of an Uber, the band was ecstatic for the start of the show, which was obvious by the exhilaration in the room as the band took to the stage.

“We’re really excited,” said lead singer Caleb Hiltunen, a sophomore audio arts & acoustics major, prior to the show. “I’ve never played with another band where I’ve been so excited about listening to the set after mine.”

Each band member’s charisma and wit was evident in their performance as they kept the crowd singing along and screaming their names throughout the set. The band’s energy was contagious, and watching Hiltunen put on the bra that was thrown at him toward the end of the set proved the band can not only create great music, but they also never fail to put on an amusing show.

The Friday Pilots Clubs finished its set with a new song, leaving the crowd in high spirits as fans eagerly awaited the appearance of The Tragic Thrills. The band, originally from San Diego, managed to draw in a huge fan base, some of which have followed lead singer Zach Porter since his days on Disney Channel’s “Allstar Weekend.”

Porter writes the band’s lyrics, and it shows in the way he sings every song with raw passion. The other members in The Tragic Thrills seemed to have no problem keeping the performance upbeat and interactive by encouraging the audience to sing along. Even for those who did not know Tragic Thrills’ songs, the band’s cover of the Bee Gees’ “To Love Somebody” enthralled the entire crowd. Toward the end of the set, Porter had the house lights brought up to take a picture of the crowd in remembrance of the show, which he later posted to Instagram captioning it with “Thank you for an unforgettable night.”

DeWyze set an entirely new mood for his set by hanging paper lanterns to accompany his acoustic performance. He grew up in Mount Prospect, Illinois, and the show was a homecoming performance supported by a crowd that was filled with his close friends and family. Switching out guitars and gracing the audience with his incredible, raspy voice, DeWyze’s performance was personal. Not only were his fans excited to have him back in Chicago, but he said he was grateful to be back where he began, adding that he was also thankful for the continued support from his fans throughout his journey.

The chemistry between all three bands was apparent from the way they performed and interacted. The musicians worked their own merchandise tables following the show, giving fans the opportunity to talk and hang out with them. It may have been the music that captured fans’ attention, but it was their humility and personalities that held it. Both on and off stage, the bands displayed passion for what they do, and their spirit was undeniably contagious.