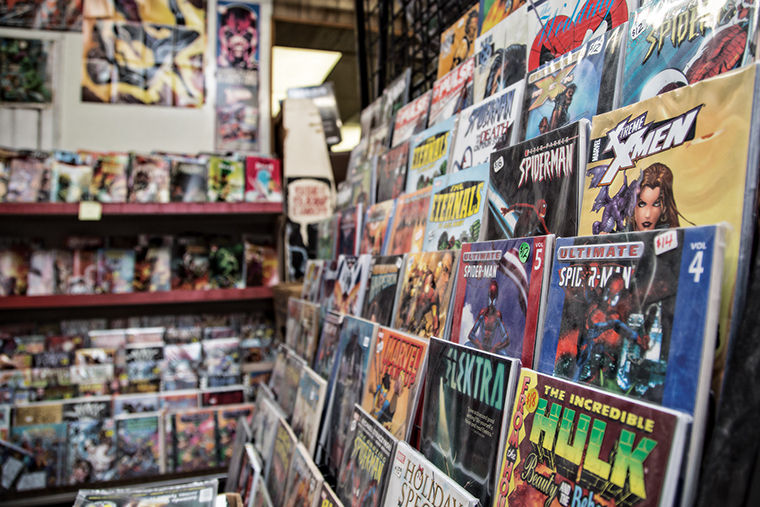 “October is going to be a non-stop 30-day discount frenzy,” Vin Nguyen said of Variety Comics in a press release. “Everything must go.”

it’s the final chapter for Chicago’s first comic book store, Variety Comics, 4602 N. Western Ave., which opened in 1975. For years the store stopped pedestrians in their tracks with its colorful superhero mural along its outside wall.

“Variety [Comics] made this corner famous,” one of the final owners, Vin Nguyen, said in a Sept. 14 press release. “Everybody knows us as ‘the place with the superheroes out front.’”

Nguyen and his business partner, Victor Olivarez, took over the store in 2011 after Rick Vitone, the man who initially opened Variety Comics, died.

“[Rick] wanted us to keep it going, and we did—but it has never been the same without him,” Nguyen said. “I know he would be proud that the business he built made it to 40 years.”

Tom Seymour, owner of First Aid Comics at 1142 W. Taylor St., said there are a multitude of differences between comics now and four decades ago, and that the times are very different.

“Back then, [comics] were just a handful of different ways to find entertainment,” Seymour said. “Now [comics] are more of a social commentary and reflection on human nature, instead of just superheroes punching each other.”

Len Strazewski, associate professor in the Communications and Media Innovation Department, said he learned how to read from comic books and has written them professionally since the mid ’80s. Strazewski said comic books  have been “evolving like crazy” for the last few decades, and the stories have gotten more sophisticated.

“The audience for comics has been getting older,” Strazewski said. “The comics shops that appealed at one point to teenagers now need to be designed for adults.”

Strazewski and Seymour both said the popularity of comics has declined since Variety Comics opened, but Seymour said he does not think comic books will cease to exist any time soon.

“I feel like comics, fiction, newspapers and things like that have always found a way to exist.” Seymour said. “When all of the print stuff dies, comics will probably be one of the last to go, but the stories, they will never go.”

According to the press release, Variety Comics will close for good Oct. 31, but everything is going on sale before then.

Variety Comics has been accumulating inventory like comics, statues, toys, books and magazines since the store opened, and now everything must go, Nguyen said.

Some of the sales include 50 percent off all back issues, DC and Marvel treasury issues, toys and action figures, Marvel Masterworks and DC archives, according to the Variety Comics Facebook page, which Nguyen and Olivarez will maintain after the store closes.

Variety Comics opened before the conception of many of the comic book characters readers know and love, and it has watched “as comic books grew up,” according to the press release.

Seymour said the characters have been ingrained in society for years now, and though some comic books stores are closing, “it’s pretty hard to kill mythology.”

Seymour said Variety Comics has been a staple in the community, and he is sad the store is closing.

“They survived all these dramatic changes in the industry, and a lot of stores didn’t,” Seymour said.

Seymour said he opened up his branch of First Aid Comics in Little Italy after owning a comic book store on the city’s North Side, near Variety Comics location. He said he thought a comic book store would do better farther from the North Side because there are many similar stores up north.

“Variety [Comics] was part of a very interesting comic shop culture,” Strazewski said. “As we lose venues for fans to interact, I think this becomes a real blow to the future of comics.”

New and continuing sales will be posted on the Variety Comics Facebook page at facebook.com/varietycomics.