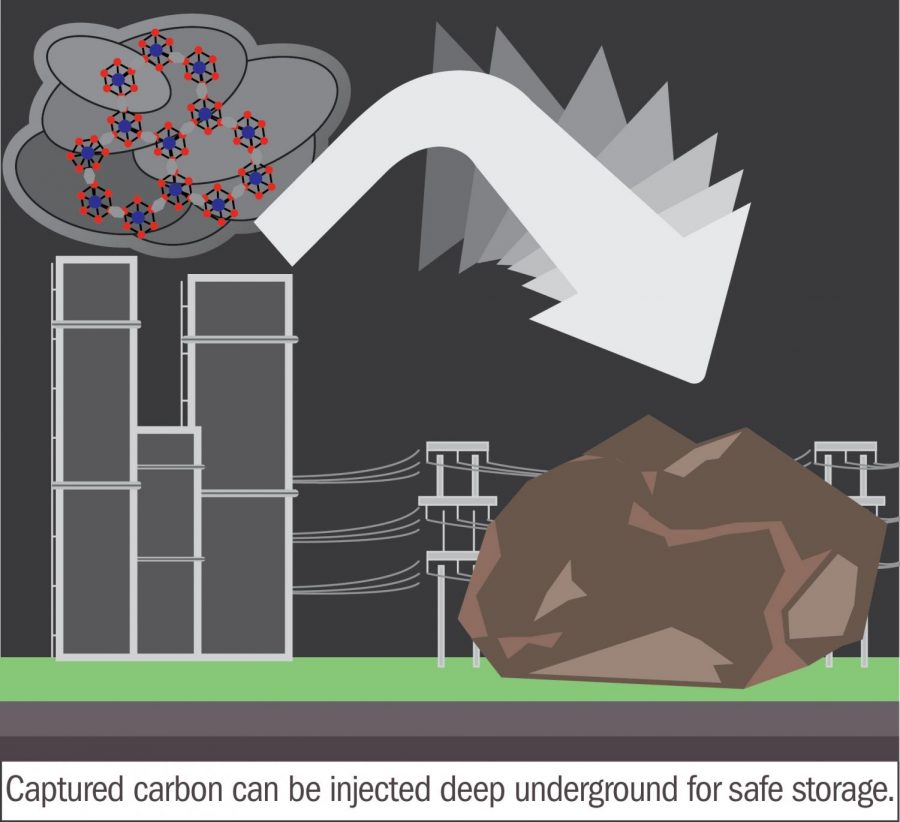 Beneath Decatur, Illinois, 181 miles southwest of Chicagoland, more than 1 million metric tons of carbon dioxide is being stored about one mile under the rock formation known as Mount Simon Sandstone.

This carbon dioxide is primarily a byproduct of fossil fuel use, and storing it in geological formations such as Mount Simon Sandstone is one way scientists are trying to offset the atmospheric buildup of greenhouse gases. The Clean Energy Ministerial cites a lack of financial incentives as the primary hindrance to the widespread application of carbon capture and storage in the U.S. However, novel developments in this field are being made with the aim of mitigating the costs that emissions producers would have to cover to curb their output.

A New Mexico State University researcher has patented a new type of hybrid metal and organic material that may hold promise for a cheaper, less energy-intensive way to capture, sequester and store the massive amounts of carbon dioxide that are released when fossil fuels are burned.

“Zeolitic imidazolate frameworks, or ZIFs, are a subcategory of metal organic frameworks,” said Nasser Khazeni, developer of the newly patented technology and a Ph.D. candidate in the Chemical & Material Engineering Department at New Mexico State University. “The common feature of metal organic frameworks is the huge surface area they are providing. It can offer something like 2,000 square–meters per gram of adsorbent, which is enough to cover a soccer field. It is really huge.”

Adsorption is a method of capturing carbon in which a carbon-dioxide-attracting compound is placed into the post-combustion gas stream. For example, after a fossil fuel is burned in a power plant but before it is piped outside, the carbon dioxide is drawn to the surface of a compound and stored there, according to Paul Fennell, a reader in clean energy in the Department of Chemical Engineering at Imperial College London and deputy director of the Imperial College’s Centre for Carbon Capture and Storage.

“One of the reasons why the new sorbent is potentially good is that it has a very high surface area,” Fennell said. “You can pack a lot of carbon dioxide onto the surface.”

Solid adsorbents—such as Khazeni’s ZIF technology—are used to securely capture carbon dioxide that is produced post-combustion and transport it for storage. This means the adsorbent needs to be durable enough to stand up to being reversibly used hundreds of times as carbon dioxide is adsorbed and released for safe storage—or desorbed—as well as efficient enough to be able to desorb the carbon dioxide with minimal energy use, according to Fennell.

“You have to be able to perform this adsorption and desorption hundreds of times, depending on how expensive your material is, before eventually it stops working and you need to replace it with something else or a new adsorbent,” Fennell said. “Getting a cheap sorbent that has as low energy use as possible is what you’re after.”

While solid-state carbon dioxide capture materials offer an advantage over more widely used commercial capture methods because they are less toxic, easier to handle and can desorb the stored carbon dioxide with only a slight change in pressure or temperature, many of them suffer from the same issue—their newness, according to Stuart Haszeldine, a professor of carbon capture and storage at the University of Edinburgh in Scotland.

“They are laboratory inventions,” Haszeldine said in an emailed statement. “These need to go to larger-scale testing [before reaching] commercialization. That’s a very long road and typically takes about 10 years.”

However, he said that storing carbon through the use of capture technology is by far the best technical solution that has been proposed to remedy the growing amount of greenhouse gas emissions in the atmosphere. Haszeldine said carbon capture and storage technology is often criticized for its substantial price tag—as demonstrated with other costly technologies such as cell phones—but the price plummets once the invention cycle begins and the products are manufactured on a larger scale. The invention of more methods will be a natural byproduct of that cycle.

“None of the various methods of sequestering carbon is enough on its own,” Haszeldine said. “The big obstacle we’ve got to overcome is the perception that no action is needed, because scientifically that perception is absolutely not correct because we can measure the temperature and carbon dioxide increase in the atmosphere from the start of the Industrial Revolution. Sitting back and waiting for something bad to happen is a really silly option, whereas [using] carbon capture and storage is taking out insurance to preserve the climate against the absolute certainty of climate change.”