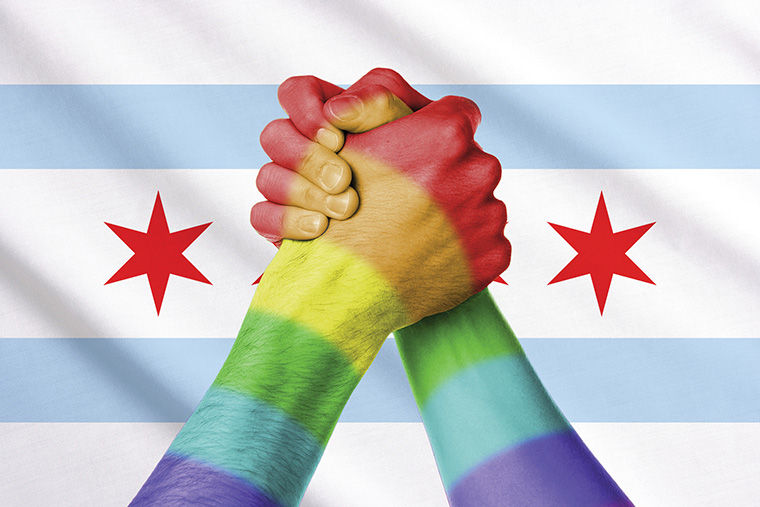 COOK COUNTY HAS issued more than 6,500 marriage licenses to same- sex couples since the Marriage Equality Act went into effect in June 2014, according to a Feb. 23 Progress Illinois report.

All but two Chicago zip codes is- sued at least one marriage license to a same-sex couple, according to Michael Ziri, director of public pol- icy at Equality Illinois.

“It is important because it shows that members of the LGBTQ com- munity are everywhere in Chi- cago, in Cook County and across the state,” Ziri said. “We are your neighbors, friends and family members, so it is important to show that the LGBTQ community is everywhere, and we all deserve equal rights.”

Cook County Clerk David Orr said residents of varying ages and ethnicities requested mar- riage licenses. Although most of the people getting married were between age 30–49, 74 people be- tween the ages of 17–19 and three

couples between the ages of 90-93 were married.

“They came from every area of the county [and] from every ethnic group,” Orr said. “This is significant because these are people that, in many cases, have been loving cou- ples for a long time but were denied the right to marry. This is why the average age of these individuals are much higher than the population for the heterosexual community.”

Orr said it is a civil rights offense to deny LGBTQ couples a marriage license and should be enforced as law across the U.S. By letting LGBTQ couples know they have

a place in society, you get citizens who want to improve their commu- nity he said.

“We have the right to give people licenses,” Orr said.

He said the state and the gov- ernment should not be discrimi- nating against people because of their sexual orientation.

“This is extremely significant from a political point of view that here we are just a few years [after gay marriage was first legalized] and now [same-sex marriage is] about to become legal throughout the country,” Orr said.

The push in recent legislation for LGBTQ equality can be attributed to the power young people have to influence change, Orr said.

“It shows young people’s life- styles are changing, more tolerance of various lifestyles and particular- ly the political power of a gay and lesbian community, their willing- ness to fight hard and demand poli- ticians step up,” he said.

Jessica Paul is a sophomore journalism major and a member of Common Ground, a club that creates a campus environment al- lowing students to embrace their identities without fear of ridicule or judgment for their sexual orien- tation. She said marriage equality is a personal issue to her because she thinks everyone should be treated equally.

“I participated in [an event]

in preparation for the marginal spring vote for marriage equali- ty,” Paul said. “I personally gave a letter to my State Rep. Mo- nique D. Davis, I had a sign and I videotaped, and I was part of the experience.”

Marianne Puechl, one of the founders of RainbowWeddingNet- work.com, which holds wedding expos meant to introduce same- sex couples to LGBTQ-friendly wedding planners throughout the country, has seen the expos contin- ue to grow in popularity.

This year will be RainbowWed- dingNetwork’s seventh annual expo in Chicago, and Puechl said attendance in Chicago has sky- rocketed from roughly 300 to about 800 couples over the last couple of years.

Ed Yohnka, director of commu- nications and public policy for the American Civil Liberties Union of Illinois, said it is important LGBTQ families know they have the legal protections that come with marriage.

Yohnka said he does not know anyone who grows up thinking they cannot wait until they are “civil unionized” and that states must of- fer marriage rights to everyone.

“We are all humans at the end of the day, we all love…so this is a great stride for us,” Paul said.