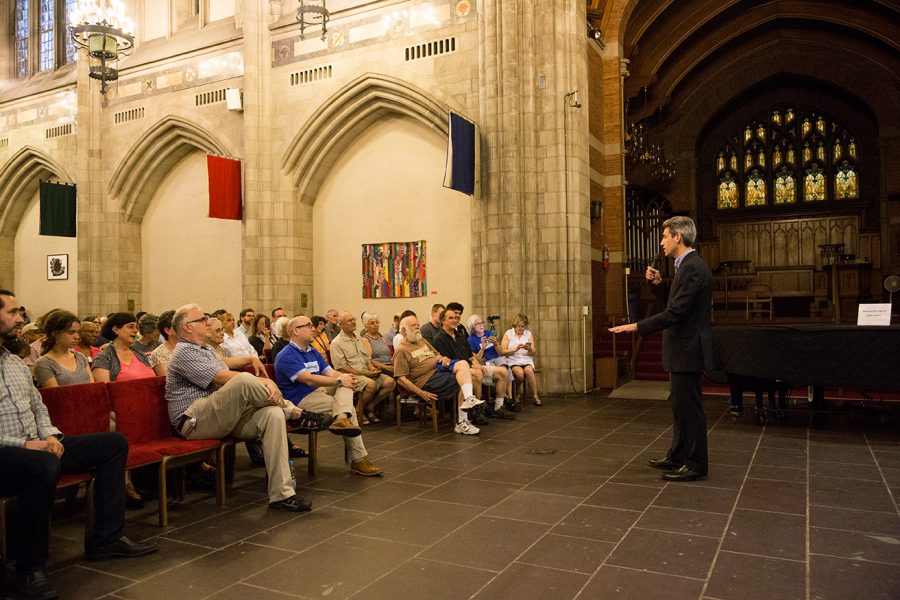 Seeking the Democratic nomination to contest incumbent Republican Gov. Bruce Rauner in 2018, Biss spoke to voters at a Hyde Park town hall, July 11, He described his progressive platform and grassroots campaign and touted himself as the candidate who will fight for the “wealthy to pay their fair share.”

A former mathematics professor at the University of Chicago, Biss emphasized that the state’s financial problems and corrupt government have been embedded for generations before the first-term GOP governor entered office. However, he said Rauner exacerbated those problems while undermining positive social services.

“Then, Bruce Rauner becomes governor, and took a torch to all of it,” Biss said. “[Rauner] began dismantling our system of social services and higher education system.”

Biss dedicated a sizable portion of his speech to Illinois’ flat tax system, calling for a progressive tax rate, which increases per individual with income.

Illinois ranks fourth among the eight states with a flat income tax rate, 4.95 percent, with North Carolina at the top at 5.49 percent and Pennsylvania at the bottom at 3.07 percent. Meanwhile, 35 states, including the District of Columbia, have a progressive income tax rate, and seven states have no state income tax, according to the Federation of Tax Administrators.

“Illinois has a budget,” Biss said to an applauding audience. “I was really happy when we passed a budget. But let’s be real, the fact that that’s something we clap for is intuitive of the most dramatic lowering of the bar imaginable.”

Reid McCollum, 34, co-leader of Coalition for a Better Illinois 6, said he is in favor of a progressive tax system because it makes sense for wealthier individuals to contribute more.

“I don’t hear all the other Democratic candidates who have a lot more money speaking about raising their own personal income taxes,” McCollum said. “That matters a lot to me. [Biss] doesn’t just stick to the easy talking points that are going to be popular.”

McCollum, who lives in Hinsdale, Illinois, said he hopes the 2018 midterm election will draw more progressive state lawmakers to support Biss in adding a constitutional amendment to create a progressive state income tax.

Responding to an audience questioner, who is worried about the U.S. Senate Republican health care bill, Biss said he supported a single-payer health care system and said he would support a plan to implement it in Illinois.

Esther Peters, outreach and campus programing coordinator at the Center for East European and Russian/Eurasian Studies at the University of Chicago, said she appreciates Biss’ message and wants to see an election about ideas and policy. The Democratic primary and general election should “not be driven by who has the most money in their campaign coffers,” she added.

Peters, 37, said Rauner’s and some of Biss’ primary opponents’ bigger campaign chests could hurt his chances in the election. However, she applauds Biss’ efforts and not “throwing in the towel because it looks difficult.”

“Money is always important,” said Peters, who lives in Hyde Park. “There’s no question that the more money you have, the more time you can be on TV. The more media access you can buy. The more likely people are going to know you’re running.”

Rauner has nearly $71 million in campaign contributions reported by his committee, Citizens for Rauner, much of which is from single donations. In December 2016, Rauner contributed $50 million to his own campaign. Kenneth Griffin—founder and CEO of hedge fund giant Citadel and richest man in Illinois—supplied $20 million to Rauner’s campaign May 15, according to Illinois State Board of Elections records.

Democratic primary candidate J.B. Pritzker, venture capitalist and heir to the Hyatt Hotels chain, has devoted more than $14 million to his self-funded campaign. Meanwhile, Biss has slightly more than $2.3 million in campaign funds, according to Illinois State Board of Elections data.

While taking shots at both Rauner and Trump, Biss did not shy away from criticizing powerful Democratic Illinois House Speaker Michael Madigan, who has held the position for all but two years since 1983.

“I know this is a difficult thing for a Democratic candidate [for Illinois governor] to say, [but] Mike Madigan has been speaker for too long and Mike Madigan is too powerful,” Biss said. “The power that he has, has held the state of Illinois back and held the Democratic Party back.”

Biss said there should be a 10-year term limit for Illinois speaker of the house.

Steve Brown, Madigan’s spokesman, said the term limit will only result in a less experienced legislature to oppose anti-worker Republicans.

McCollum said he was “extremely impressed” with Biss’ speech, progressive platform and willingness to stand up to those in power.

“[Biss] is willing to speak up against the machine politics that have create a lot of the problems historically that enabled people like Donald Trump and Bruce Rauner to take over politics,” said McCollum. “That takes a lot of honesty and bravery.”

Biss said Illinois’ current political system is focused on short-term priorities, which has caused the state’s middle class to suffer, infrastructure to crumble and stumble into financial crisis.

Among other policy positions brought up in the town hall, Biss advocated for legalizing recreational marijuana, criminal justice reform and joining the coalition to reenter the nation in the Paris Climate Agreement.

Democracy is about demanding our elected officials work for the people, Biss said, adding that he is not intimidated by the size of his opponents wallets.

“We have the kind of government in Illinois where [voters were forced] to pick our favorite billionaire or person picked by the machine for too long,” Biss said.