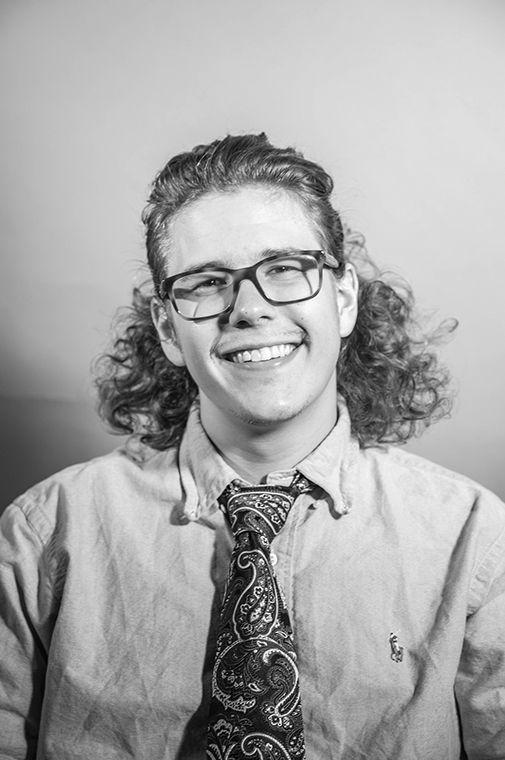 Growing up in St. Paul, Minnesota, Daniel Olesen, a junior audio arts & acoustics major, has been on the ice since he was 4 years old. Olesen draws inspiration from athletes such as Cal Clutterbuck and Derek Boogaard, former members of the Minnesota Wild hockey team he followed as a kid. Olesen, a defensive player, continues to pursue his passion for hockey as one of the co-captains of the Renegades

Olesen chose to pursue audio after taking an audio technology class in high school. The class later landed him a job running the sound board for movie screenings and live events in the school’s auditorium.

The Chronicle spoke with Olesen about his passion for hockey, making music digitally and his plans for the future.

THE CHRONICLE: How did you become involved with hockey?

DANIEL OLESEN: It’s kind of a rite of passage in Minnesota—everybody orders skates at one point in their life. My dad played his whole life, I learned how to skate when I was 4 years old and I was in a [hockey] league at around 5 or 6. I ended up playing high school varsity for three years and have played for 14 years consecutively.

What drew you to your current major at Columbia?

One of the girls in the class with me had chosen Columbia and she told me about the school. I liked the sound department. It looked like a good fit, very open-ended in terms of what you could learn and what you could end up doing.

Why did you choose to major in audio arts & acoustics rather than pursuing athletics professionally?

Definitely the sobering realization that I wasn’t that good at hockey. I love this sport, I played it as much as I could and I pour my heart into it, but I just wasn’t good enough. I figured it might be time to move on and do something else. I can always bring my skates and stick with me and go play wherever I want, but it was just time to shift focus with the realization that I wasn’t going to make money playing hockey.

What is the most challenging part of being a college athlete?

Definitely finding the time. This year our team was plagued by attendance issues and people just not being able to commit the time. All our games are at 9 or 10 in the morning, and we had a lot of people who would just not show up without saying anything. School is the main reason why everyone on the team is out here at Columbia, and second is usually work, and fun comes third.

How much time do you dedicate to workouts and practice?

We don’t have team workouts or anything. Practice in itself is anywhere between $200–400 an hour for the ice rink rental. It wasn’t really in our budget or theoretically possible for us to have any sort of on-ice practice. It’s not as intense as it was for some of us who have played before. Obviously winning is fun and whatnot, but we’re really just out there to play, so all of us could get back out there and play hockey for an hour or two every week.

What do you love about playing hockey?

What drew me to it the most is the competitive nature of the sport. I’ve played baseball and soccer and all of those, but nothing seemed to be like hockey. It’s a full-body sport with a competitive and skill aspect to it. It’s fast-paced [and] requires a lot of strength and “hockey sense.” It requires a sharper mind on the ice. The relationship between the mind and the physical aspect of the game was intriguing as a kid, but I didn’t really notice it until I got older. When I was a kid I think I started playing because my dad made me and I just liked it. I was able to go out and skate with him and stuff. He definitely pushed me toward it. Once I got older, I started to understand more about it and it definitely started to [be] a big part of my life.