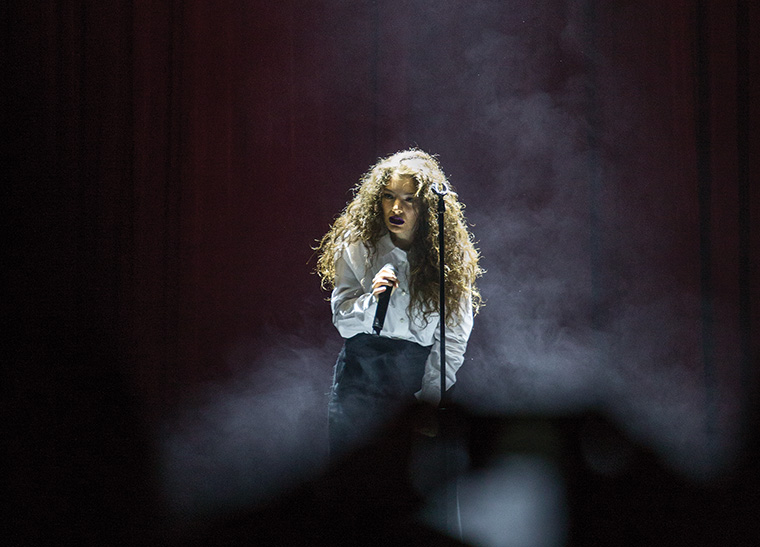 Under a twinkling night sky dusted with surreal clouds stands a miniature castle and a meek, doe-eyed Lorde, wearing an oversized blouse and suit pants, wailing above a pulsating beat to a crowd.

“You could try and take us/ But we’re the gladiators,” she howls into the mic. “Now we’re in the ring and we’re coming for blood.”

In Chicago’s mythic Aragon Ballroom, 1106 W. Lawrence Ave., on March 18, New Zealand pop phenom Lorde, born Ella Yelich-O’Connor, had the crowd of 4,500—including Mayor Rahm Emanuel— in the palm of her hand.

After her 2013 debut album Pure Heroine spread infectious electro-pop and insightful lyrics about the trials and tribulations of teen turmoil across the world, Lorde won two Grammys for Song of the Year and Best Pop Solo Performance. The worldwide hit “Royals” was the first song by a female solo artist to top Billboard’s alternative chart in 17 years. Oh, and she won’t be 18 until November.

Lorde, performing live with minimal presentation inside the regal venue illuminated by colored strobes, lit up the room with her harmonious lilt and poised anti-popstar swag.

During her opening crash, “Glory and Gore,” her low, clenched growl nourished the blipping beats as she clawed at the air, tossing her curled mane and flailing her arms around as if she was a caged tiger fighting its imprisonment.

“Hey Chicago,” a sweaty Lorde squeaked as she peeked through her frizzled mop following a gorgeous, blood-pumping rendition of “400 Lux,” “Does anyone have a hair tie?”

Drawing from pop and electro-rock, Lorde looks to artists with unique tenors like Grimes, Prince and SBTRKT to study the way they use their voices as instruments. Her Nancy Sinatra-like coo sounded milky just like in her album—pure and innocent—though on “Bravado” she belted a robust vibrato and floated effortlessly into a higher register. It was breathtaking, especially considering she apologized for “feeling a little sick.”

In contrast to the rest of the pop stars at the Top 40 lunch table, Lorde offered a mature complexity and lyricism that has been missing from pop music for years. She turned down an opening slot on Katy Perry’s world tour, called out Taylor Swift and Selena Gomez for setting poor examples for young women, and thanks to her pre-teen years spent writing short stories in her bedroom, her lyrical depth paints an astonishing image of a wasted post-Internet youth. She is an exciting contradiction: a vibrant pop star who has been in the trappings of major labels since she was 13, and an anxious, heartbroken teen.

A sugary pop goth-girl—picture a mini St. Vincent-Bjork-Feist-hybrid—Lorde performed almost all 14 tracks off Pure Heroine, pulling the crowd deep into her creative psyche. She weaved in beautiful, poetic renditions of Kanye West’s “Hold My Liquor” and The Replacements’ “Swingin’ Party,” which went unappreciated by the younger attendees.

What makes Lorde so honest is her lack of life experience. Her songs do not only reflect the downsides of growing up, but the uncertainties, too. She’s contradicting herself, often in the same breath. As a young artist the uncomfortable, awkward and even embarrassing journey from childhood to adulthood is on display for the public eye.

Lorde herself has stated she struggles with social anxiety. In “Tennis Court,” she feigns a careless confidence—“It’s a new art form, showing people how little we care,” but as the song moves forward, the cracks begin to show. “We’re so happy even when we’re smiling out of fear,” but at least “it looks alright in the pictures.”

She’s a person before she’s a popstar, which makes it so much more disappointing to see that honesty go unappreciated.

Toward the end of her set, she looked out into the audience as the quiet hymn of her own voice hummed in the background.

“It’s uncomfortable for me to talk about my songs, but I like talking about this next song. It feels right,” she said, looking at the floor.

She proceeded to tell the story  behind “Ribs,” when she threw a massive house party when her parents were out. Although at first breaking the rules felt like a rite of passage, it kept her laying awake, wondering if this was a bridge she could not re-cross.

“Can you go back to being a kid or is that it? Where do you draw that line? Can you have one foot in each world or does it not work like that? And this is something that keeps me up all the time, even now. All the time, I’m f–king terrified.… So I wrote this song and the whole time I tried to make everything sound soft, sound warm, sound like pulsing color, like pulsing light. Because I’m really scared of this.…” Her voice trailed off and began to break.

“I made this thing and I told you this story, which is very personal to me, but here you are, in this tiny castle indoors under a fake night sky. And I know a lot of you are my age, or a little younger or a little older, and you’re here because in some way you understand what I’m talking about. You understand the words that I write. You get it. There’s nothing more important to me [and] I couldn’t be more thankful. Thank you so much, Chicago.”

Seeing the fluorescent glow of smartphones illuminating the faces of the teeny-boppers in the audience, decked head-to-toe in black emulating Lorde’s gothic style, showed although she’s pushing Top 40’s boundaries, it’s to no avail. A ten-minute speech may be long, but it wasn’t about PR—it was about establishing a connection with the audience, one too busy tweeting to pay attention. So Lorde gave them everything they wanted.

Emerging from offstage wrapped in a golden cape, she swayed in a warm pink glow under fluttering confetti for the encore “A World Alone,” looking out to a sea of ecstatic faces that had been disengaged moments before.