EDITORIAL: Melania Trump needs education on what she wears 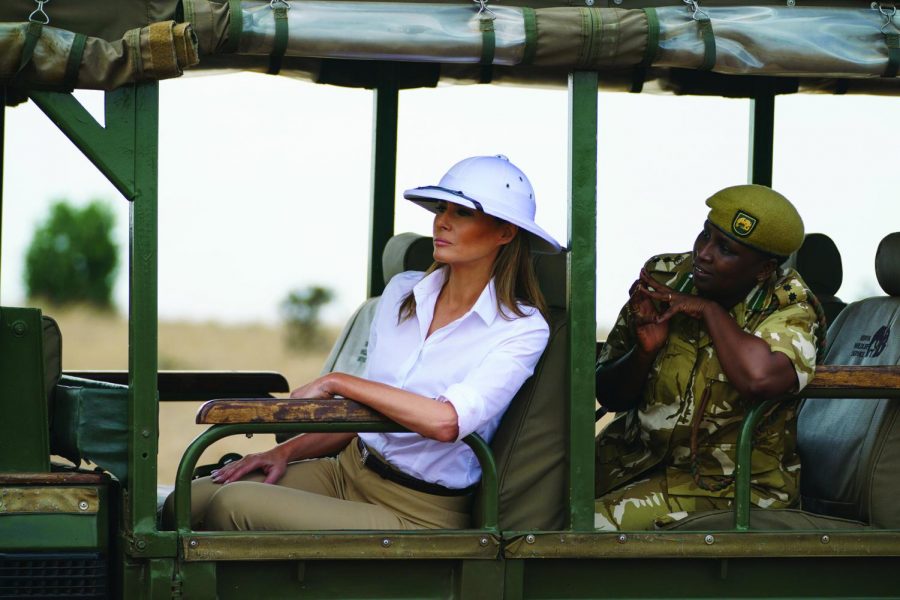 Melania Trump needs education on what she wears

First lady Melania Trump visited Ghana, Malawi, Kenya and Egypt, having left for her trip Oct. 1. During her trip, she was seen wearing outfits reminiscent of European colonizers. One outfit in particular caused outrage across social media: khaki pants, a white button down shirt and a white pith helmet.

A pith helmet is a short brim hat that carries a lot of history. According to an Oct. 8 Washington Post article, the helmet was worn mainly during the 19th century by colonial officials, soldiers and explorers. This hat was worn so frequently by invaders that it became a symbol of imperialism in world history.

According to an Oct. 11 Time Magazine article after criticism of her outfit, the first lady said, “I wish people would focus on what I do, not what I wear.”

Melania should understand better than anyone that clothes carry a message, especially for someone in such a powerful position.

It’s important not to target women for what they wear, but when you’re visiting Kenya—a country with history of being taken over by European Colonizers—and wear controversial clothing, such as a pith helmet, you should expect a response.

Colonialism in Kenya dates back to 1895 when the British declared it a colony. During the 70 years of colonial rule, racially discriminatory policies were installed, according to Information Cradle—an information guide about various countries and cultures. Many of these colonizers wore pith helmets.

The same Washington Post article noted the popularity of the helmet dwindled by the end of World War II because of its mark of racial superiority and representation of imperialism.

While pith hats aren’t exclusive to colonizers—they can be seen on police officers in Cameroon and Peru—there have been heated debates in recent years about whether it’s acceptable to wear pith hats at all.

“Her attire is a signal of her [weak] understanding of what Africa is in 2018,” said University of California Riverside Professor Kim Yi Dionne to the New York Times on Oct 5. “It’s tired, and it’s old, and it’s inaccurate.”

Did Trump understand the history and controversy of the helmet when she put it on that day? Probably not. But as first lady and a worldwide figure, it’s her responsibility when visiting foreign countries to do her research and dress accordingly. When actress Angelina Jolie visited Pakistan in 2010, she was seen wearing a hijab out of respect for the country’s culture. Small things like this show you’ve done your research, and it can go a long way to get acceptance from the people in that country.

Trump needs to think about how she presents herself in foreign countries. Fashion is a big part of her identity, but it needs to be respectful to the culture.