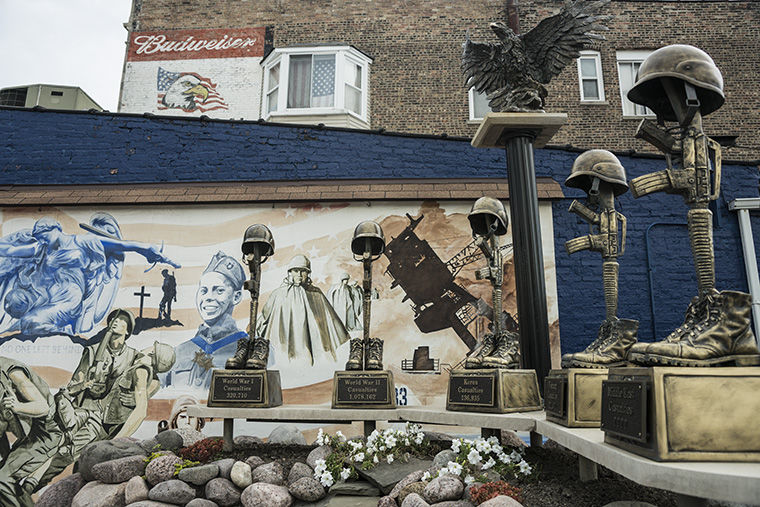 Columbia has 138 student veterans currently using benefits provided by the college, according to Paul Loretto, the veterans educational benefits counselor.

Like many military members, Columbia’s student veterans are only honored once a year on Veteran’s Day. Yet veterans struggle with the effects of military service all year round, many for the rest of their lives.

Veterans who go to college after serving often have difficulty adjusting to civilian life. Columbia understands veterans’ needs and has 138 student veterans currently using benefits provided by the college, according to Paul Loretto, the veterans educational benefits counselor.

Citizens with no military experience often overlook or misunderstand the effort and strength veterans must have, according to Tom Nawrocki, an associate professor in the English Department and a Vietnam-era veteran who served in the U.S. Marine Corps in Japan.

Julio Lopez, a senior cinema art + science major who served in the U.S. Navy from 2009 to 2013, recalled the hurdles to transition back to an everyday civilian life.

“Veterans are expected to come out and be a part of society, with only a week or two to really adjust,” he explained. “That can be difficult, especially if the latter half of your life has been spent in the military.”

Nawrocki expanded on why this “shifting perspective” can be difficult.

“When you’re in the military, you’re isolated from normal community living,” Nawrocki said. “Even when you come home on leave, you feel like an outsider.”

Nawrocki, who is also a faculty adviser for Columbia’s Student Veterans of America’s chapter, expressed the feelings he experienced when he returned from war.

“After you’ve been gone for a few years, you don’t really feel at home when you come back to what once was your home,” he said.

Lopez mentioned that veterans returning from war often have more complicated personal lives than students who go to college straight out of high school. Many have families they have started before going to war, which they now must balance with a college routine.

Aside from all this, veterans are older, have traveled and simply have more experience in dealing with other people and problem-solving, exacerbating feelings like an outsider in a room full of freshmen, Lopez added.

Loretto, a special programs coordinator for Veterans and Graduate Students who served in the Marine Corps from 2001 to 2005 on active duty and through 2008 in the reserves, said he felt different from other students as a former marine.

“I started college at 28 years old—easily eight years older than your average freshman student,” Loretto said. “At 18, 19 or 20, veterans that were serving in the military were living a very different life.”

Loretto said veterans should deal with the fact that they are also students.

“One of the things that veterans need to reconcile is that we’re all here [in college] for the same purpose,” Loretto added. “You’re just another student trying to make your way.”

The synergy between college students and veterans is easily achieved once this barrier between ages is broken, Loretto said. The Student Veteran Society of Columbia raised awareness about homeless veterans by hosting a “sleep-out” in the middle of December for the past three years. It has gotten attention from news organizations nationally and raised thousands of dollars for veterans, averaging about $30,000 in total, according to Lopez.

This year, the sleep-out will be held at the Sculpture Garden near the Conaway Center, 1104 S. Wabash Ave. Building. Students are invited to join the Student Veteran Society of Columbia during the 9th and 10th of December in solidarity with homeless veterans.

The Student Veterans of America, an organization that provides military veterans with support to succeed in higher education, and the GI Bill, which allows the U.S. government to pay the entire cost of tuition for veterans, are two assistance methods for veterans.

While public schools are required to have a Veteran’s Center, private schools, like Columbia, aren’t. The Veteran’s Center, located at the Alexandroff Campus Center, 600 S. Michigan Ave. Building, offers services to veterans such as assisting them in accessing the GI Bill. Aside from providing information, the Veteran’s Center is a place where veterans can connect with each other and find support from other veterans.

“Columbia’s very good about making sure our veterans are taken care of,” Lopez said. “They’ve given us a Veteran’s Center—a resource center that can be used as our own space.”