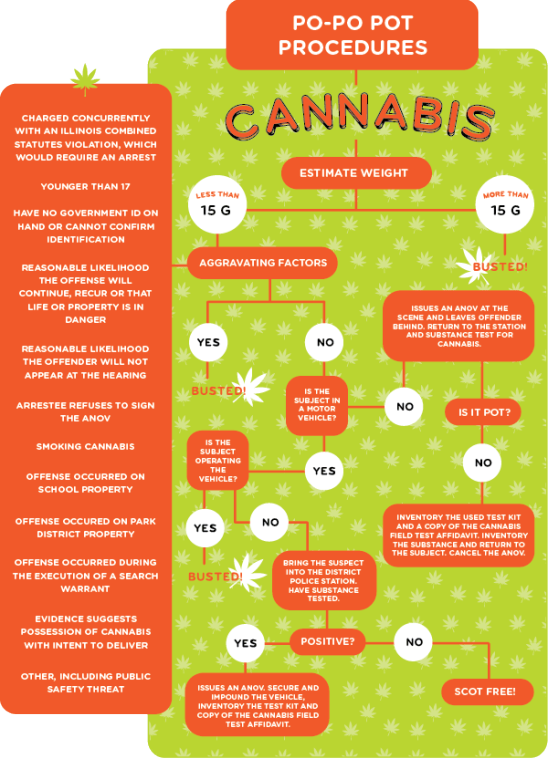 Toking up outdoors is a popular activity among Columbia students living in student housing. The growing acceptance of both medical and recreational marijuana may tempt herb-loving young adults to spark up on a walk in the park, but those students may want to rethink their public routines.

On July 5, 2012, Chicago’s municipal code was amended to reduce the penalty for possessing less than 15 grams of pot. According to city data, the Chicago Police Department carried out 15,915 arrests for possession of less than 30 grams of cannabis in 2013.

Although the amount of pot that warrants a criminal charge has been reduced, the common perception that marijuana is decriminalized within city limits is not entirely true, according to criminal defense lawyer Darryl Goldberg. The difference between getting a ticket and sitting in the back of a squad car is left to the arresting officer’s discretion.

“If someone has an incredibly small amount of marijuana—we’re talking less than an eighth, less than a couple of grams or a joint or a roach—people may not get arrested,” Goldberg said.

If caught with less than 15 grams of pot, offenders will be issued an Administrative Notice of Ordinance Violation, which is similar to a ticket but requires a court appearance and carries a fine of up to $500.

There are several factors that could prompt officers to issue more than an ANOV. In the case of an offender younger than 17 getting caught smoking in public or being found in possession of marijuana on Park District property, the likelihood of receiving more intense consequences increases, according to CPD’s Alternative Cannabis Enforcement Program. CPD officers evaluate violations using specific criteria to decide whether an ANOV should be issued or charges should be filed, such as the amount possessed and whether the offender was driving.

Goldberg said students should be aware of their constitutional rights during any search and seizure, adding that under the Fourth Amendment, police are not allowed to stop anyone on the street and start searching their pockets without being able to prove probable cause or reasonable suspicion.

“They may try to deem it a consensual encounter … [and] start asking you questions [about] whether you have drugs and whether you consent to a search,” Goldberg said. “If a police officer doesn’t like you because you have long hair and a Grateful Dead T-shirt and they’re stereotyping, that’s not enough.”