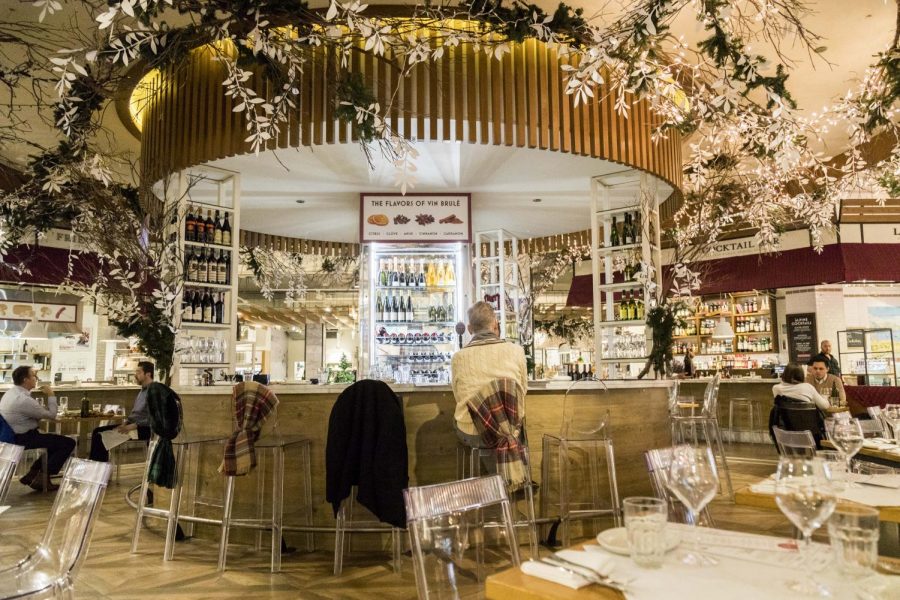 Baita, a new restaurant at Eataly, brings the Italian Alps to Chicago with dishes inspired by food served on top of the mountains.

As temperatures plummet and snow covers the city, warm comfort foods are in demand. Look no further than BAITA at Eataly.

BAITA is serving up Italian-style food inspired by the cuisine found in Alpine ski lodges, which is fitting considering BAITA means small ski lodge in Piemontese. The decor perfectly correlates with the Alp’s atmosphere. Wintery and simple, with snow-covered branches covering the ceiling, the restaurant feels like a winter wonderland.

Located on the second floor of 43 E. Ohio St., BAITA will only be dishing up comfort foods until March.

During my visit on a Wednesday afternoon, BAITA was not crowded and I was immediately greeted by my server. With so many options to choose from, he recommended the sampler special, which allows diners to choose one item from the appetizer, entree and side sections of the menu.

Since Eataly is made up of small restaurants, such as La Pizza & La Pasta and Osteria di Eataly, there isn’t a central kitchen. Our server warned us that because of this, the food could come out at different times, but it wasn’t an issue at all.

First up were the appetizers, arancini and raclette. The arancini were fried rice balls with minced mushrooms inside. Because this was a sampler, it only came with two. One bite of these had me wishing for more. The outside was crisp and fried to perfection, with a sweet aftertaste.

The raclette—melted cheese over potatoes served with bread—was the opposite: savory but still delicious. Raclette is a traditional dish found at a lot of ski lodges. When tasting this food, it became obvious that there’s nothing better than warm cheese and potatoes after a snowy adventure.

Next were the entrees, gnocchi al forno and speck e fontina pizza alla pala. The gnocchi was served in the cutest rustic dish with gold handles. It was incredibly indulgent, covered with cheese and oil. It completely melted in my mouth and sent me to gnocchi heaven.

The sides, Cavoletti di Bruxelles and patate, were served with the entrees. The cavoletti di Bruxelles were Brussels sprouts with parmesan cheese. The smell was pungent, and the flavor matched. The patate were potatoes with roasted garlic that wasn’t really strong. If these potatoes had a more powerful flavor, it would have completed the meal.

With all the cheese and potatoes, the meal was gluttonous in the best way. BAITA’s deliciously decadent and warm food is a savory cure for the winter blues.