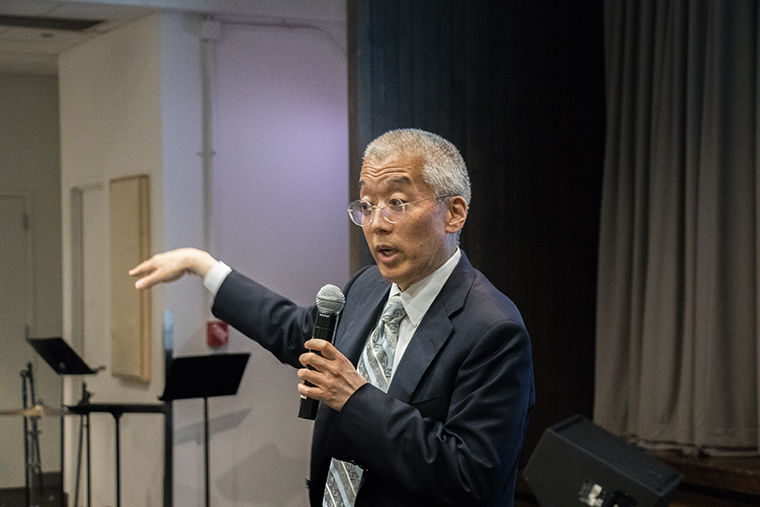 President and CEO Kwang-Wu Kim spoke at the final Faculty Senate meeting of the semester on May 4 at 618 S. Michigan Ave.

President and CEO Kwang-Wu Kim announced at Faculty Senate’s May 4 meeting that he was “pausing” the decision to discontinue several dance-related therapy programs and terminate the tenured faculty associated with them to allow time for greater study of these recommendations.

“I take seriously the concern that the analysis of the viability of the programs has gaps in it, and if that is the case, then we can’t proceed,” Kim said. “I was touched and moved by the quote in the senate’s statement that tenured faculty should only be terminated as a very last resort, which of course I agree with too.”

During the meeting, held at Stage Two, 618. S. Michigan Ave., Senate president Raquel Monroe, associate professor in the Dance Department read aloud a letter from Kim in which he recommended the Board of Trustees withhold any decisions regarding program closures and faculty terminations until the next board meeting in October. The board had been scheduled to vote on the matter on May 5.

“What’s happening is that they’re doing the work that should have been done to begin with,” Monroe said. “They’re going back to do that work and to demonstrate the steps taken. We’re curious what that means for the [Senate] executive committee.”

The programs affected by Kim’s decision are the BA in early childhood education and three therapy programs, including the MA in dance movement therapy and counseling, and the graduate Laban certificate in movement analysis, as reported April 2 by The Chronicle.

Kim said he has asked Wearden to prepare new reports by the end of August, which include a revised analysis of program viability that responds to concerns raised by Faculty Senate and a report about the alternative placements for the five tenure faculty.

The college’s ongoing enrollment decline is squeezing its resources, Kim said. The administration needs to evaluate programs that may have been valid when they were initiated but are not anymore because of these circumstances, he added.

“I heard there was some feeling that perhaps what was really going on here was the uncovering that this was a school that did not truly respect its tenured faculty, and I want you know again, from my perspective, nothing could be further from the truth,” Kim said. “What’s going on is we’re in tough times, we’re trying to figure things out and we’re going to decide as many options as possible.”

Kim said the changes to the curriculum and programs will add to the success of the student body.

“It is very difficult to build a meaningful life and career if you can’t get a job. That’s what we’re trying to do,” Kim said. “We’re trying to elevate the aspiration of the institution to guarantee the success of the students.”

During his presentation, Kim also said the committee to find a new provost will be determined before the end of the semester. The nationwide search for a new provost to replace Wearden, who will step down in June 2019 as Kim announced April 6, will start in the fall and be officially announced in late winter 2018 or early spring 2019, he said.

Sarah Odishoo, associate professor in the English and Creative Writing Department, said it is beneficial to have Kim at senate meetings.

“Your presence and your contributions on a regular basis and not once a semester would be invaluable,” Odishoo told Kim during the meeting. “People would benefit from understanding where you’re at and where we’re going.”