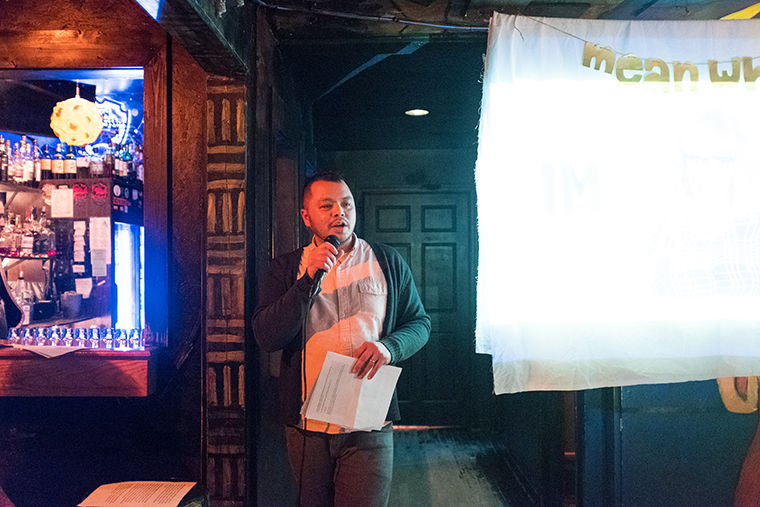 Jan-Henry Gray the Jan. 23 live events for Meanwhile held in the second floor of Delilahs in 2771 N Lincoln Ave.

Chicago is home to many open-mic nights and slam poetry events, and performers nationwide flock to the city to take part. Last May, a new event arrived on the storytelling scene with a twist on the traditional spoken personal essay or passionate poem.

The storytelling and zine-making series titled Meanwhile is held every other month on the second floor of Delilah’s, 2771 N. Lincoln Ave.

Founded by writer Megan Kirby and sponsored in part by a grant from the Luminarts Foundation, a group that offers grants to Chicago artists, Meanwhile changes the customary storytelling format.

While someone reads their work, audience members illustrate that night’s “theme,” either responding to a prompt given by Kirby and her co-host Jay-Henry Gray or to the poem being performed.

“I go to and do a lot of readings, and I was thinking about the problem of when an essay is not quite landing or [how] when you’re bored, it’s nice to have something to do with your hands,” Kirby said. “I wanted to see if there was a way to channel [the idea of art as play] in a room full of people.”

The audience engagement creates a communal and interactive energy, Gray said. It translates into actual tangible collaboration, as Gray and Kirby sift through the illustrations and include their favorites in that month’s zine, which is released at the next performance.

Edward Thomas, who performed at the most recent event Jan. 23, said he found the audience interaction quite different from other open mics.

“It’s an invitation to do a creative task together,” Thomas said. “I enjoyed that. So many times you perform … and you feel like you’re putting yourself out there and the audience isn’t giving you anything back. In this case, the audience is actually working on contributing to the whole experience.”

Kirby and Gray decide on a theme for every performance, and Jan. 23’s theme was “mythical creatures.” Past themes have included “celebrity encounters,” “early internet” and “other people’s apartments.”

The themes need to be widely accessible so anyone can relate, yet specific enough to evoke particular  memories from people, Kirby said.

“You want a theme that’s going to make people want to tell stories,” she added.

Kirby, who has been making zines for about eight years, said zines give people permission to be messy.

Kirby and Gray would like to court sponsors or get more grant money so Meanwhile can begin paying readers for their performances.

“It’s something you can do just because you love it and because you want to do something fun or different or weird, and it doesn’t have to be polished and perfect,” she said.