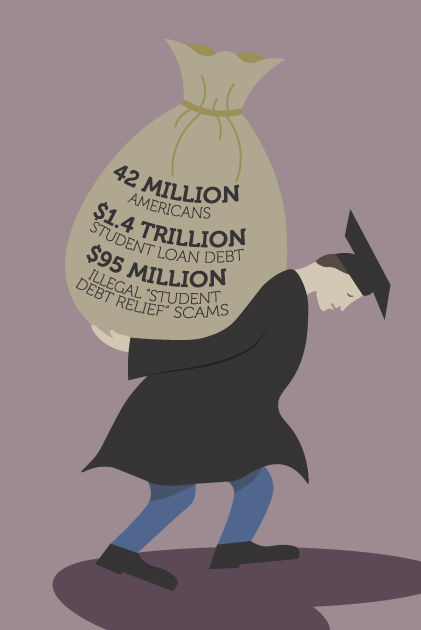 About $40,000 deep in student loan debt, Deyatres Dewalt heard an advertisement on the car radio that seemed too good to be true.

Dewalt called the company, Teldebt Solutions Inc., in April 2015, and within the first half ring, a representative answered promising that he could have her entire federal student loan debt forgiven. The caveat was a $500–$700 fee. The red flags started flashing, and she requested to read the contract before signing up for its services.

The salesman emailed the contract to review the same day, but Dewalt said she could not access the electronic document until she signed it. Despite the salesman’s pleas in follow-up calls, Dewalt refused and broke communication.

However, during the initial phone call, Dewalt provided Teldebt with her Federal Student Aid ID, answers to her FSA website security questions and her debit card information. Armed with this vital information, the company withdrew $167 from Dewalt’s account. She called the company five times the same day with no answer. As soon as the company got her money, it turned into a “ghost town,” she said.

“[I] could not reach anybody, I couldn’t find any additional phone numbers. The 1-800 number that was broadcast was set to go to voicemail at that point,” said Dewalt, a 34-year-old physician’s assistant senior at Arizona State University.

Dewalt was finally able to reach a Teldebt representative, threatened legal action and filed a complaint with the Better Business Bureau, which prompted the company to refund her money.

“I was aware [of student loan debt relief scams],” Dewalt said. “I thought [Teldebt] was a scam from the beginning, but I was at the point when bills were piling up and it hit me with how much I was going to come out of school owing. [So] I tried and I proved myself right.”

Dewalt is one of more than 42 million Americans struggling with her portion of more than $1.4 trillion in student loans, the second largest segment of U.S. debt after mortgages, according to the Federal Trade Commission.

A coalition among the FTC, the Washington, D.C., and 11 state attorneys general, including Illinois Attorney General Lisa Madigan, is trying to safeguard against those who would take advantage of financially desperate students by cracking down on student loan debt relief scams.

Two of the companies are based in Wood Dale, Illinois, a Chicago suburb west of O’Hare International Airport. They are Teldebt Solutions, Inc., which involuntarily dissolved Sept. 8 and FDATR, Inc., which conducted business under the names Federal Student Loan Relief and Federal Tax Relief, according to Madigan’s lawsuit.

The companies are accused of misleading tactics such as charging customers about $700 in upfront fees for document preparation services, which are provided free by the U.S. Department of Education. Other allegations include deceptive advertising to lure borrowers with false promises of reducing or forgiving student debt and adopting government-sounding names to create the illusion of legitimacy, which is a federal telemarketing rules violation, according to Madigan’s lawsuit.

Student loan borrowers are susceptible to relief scams because they are struggling, which makes deceptive tactics all the more enticing, said Natalia Abrams, executive director and co-founder of Student Debt Crisis, a nonprofit organization that offers information for student borrowers and advocates for higher education loan policy reform.

Abrams realized how “pervasive” these tactics were when a relief company began using a former Student Loan Crisis logo in 2013, until she sent a cease-and-desist letter.

“If you have federal loans, all of the programs that these companies are offering you can do for free by yourself,” Abrams said. “They don’t tell you that. They make it sound like the programs are very confusing and hard to apply for. They use a line like, ‘You pay somebody to do your taxes, why wouldn’t you pay somebody to help you out with this?’”

Relief companies are also aggressive with their social media marketing and will contact borrowers directly by phone and email. If those deceptive messages reach a student borrower who is financially desperate and struggling, than they are more likely to fall for relief scams, said Sandy Baum, a senior fellow and higher education economics expert at the Urban Institute.

According to an Aug. 16, 2016, survey by Student Debt Crisis and NerdWallet, about 60 percent of respondents said they had seen advertisements for companies charging for student loan debt relief, forgiveness and consolidation, and 44 percent said a company had directly contacted them.

Abrams said relief companies often deceive borrowers into thinking they are eligible for the Public Service Student Loan Forgiveness program. This program forgives a borrower’s remaining balance on Direct Loans after 120 qualifying monthly payments are made under a repayment plan while working full-time for a qualifying employer, which include federal, state and local government organizations or tax-exempt nonprofits, according to the Education Department’s Federal Student Aid website.

“If the federal [student loan] system were simpler and easier for people to understand, then people wouldn’t be as vulnerable because they would know exactly what to do to get the relief for which they are eligible,” Baum said. “But they don’t because it’s a complicated system, and there are bureaucratic hurdles and they feel desperate. Unfortunately, there is not a lot of financial literacy so people fall for all kinds of scams. It’s not surprising people fall for [student loan debt relief fraud].”