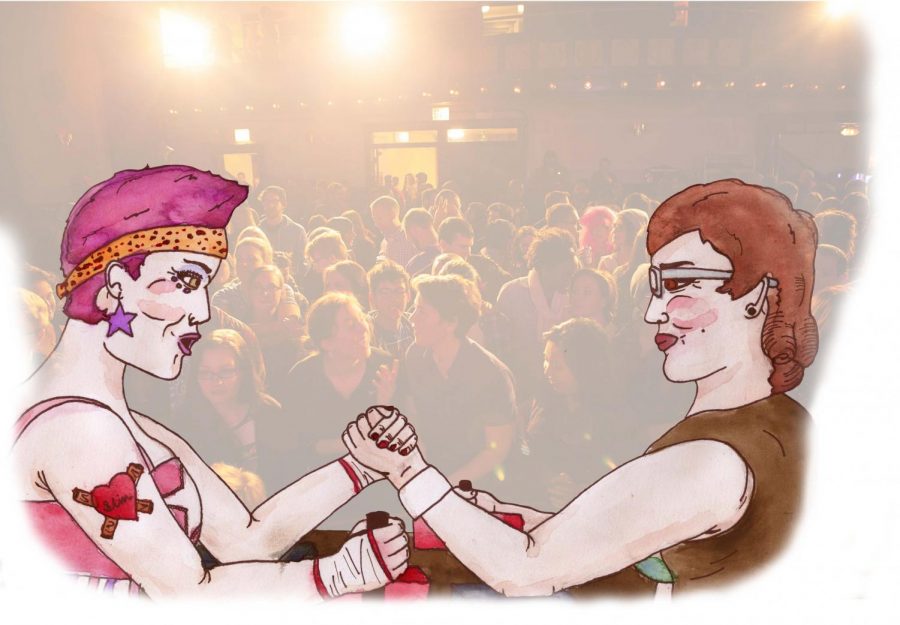 Wrestling and theater have gone together since almost the beginning, whether wrestling fans want to admit it or not. Lights, pyrotechnics and theme songs often accompany wrestlers making dramatic entrances, as with Hulk Hogan’s “I am a real American,” proclaiming Hogan the ultimate patriot.

The Chicago League of Lady Arm Wrestlers, which is set to host CLLAW XXI: My Bloody Valentine on Feb. 13 at the Logan Square Auditorium, 2539 N Kedzie Blvd., goes in for the same theatrical elements as the beloved SmackDowns and cage matches of World Wrestling Entertainment, except for one thing—the arm wresting is actually real.

Karie Miller started CLLAW in February 2009 and now plays the role of Rockke L. Squeltch, CLLAW XXI Mistress of Ceremonialism and an ensemble member of the Sideshow Theatre Company. While pursuing a graduate degree at the University of Virginia with other future members of the Sideshow Theatre, Miller said she participated in the original League of Lady Arm Wrestlers, founded in Charlottesville by theater actress Jennifer Hoyt Tidwell. When she moved to Chicago to join the Sideshow Theatre Company, Miller offered up the idea as a possible event series and fundraiser for the theater, and the Chicago league was born.

Miller said she got Tidwell’s blessing to start her own league of arm wrestlers in Chicago, and CLLAW now brings hundreds of spectators to each event, which was not the case during the organization’s humble beginnings.

Produced by the Sideshow Theatre, CLLAW is very much a theatrical event. The majority of the wrestlers involved have some sort of theater background, although it is not a requirement, and all of the characters portrayed by the wrestlers are just that—characters with their own personas and backstories. Miller said personas portrayed during the events are just as important to the show as the arm wrestling itself.

“The bigger performative element of it is the energy coming off of the wrestlers and their personalities, so when you walk in you’re smacked in the face by these crazy characters,” Miller said. “That’s what’s really on display more than the actual physical strength—this explosion of character, explosion of charisma that all of these ladies crank out.”

Kaye Straub, who wrestles under the moniker “Macho Ma’am Candy Savage,” a nod to the late Macho Man Randy Savage, one of the most well-known professional wrestlers of all time, said she got involved with CLLAW shortly after moving to Chicago because the combination of theater and wrestling matched her personal interests perfectly.

“I was looking for a hobby that was artistic and fun,” Straub said. “I’ve always been a big WWE fan and [since] I went to school for theater I was like, ‘I have to do this.’”

Straub is a two-time champion of CLLAW and will be defending her title at the upcoming event. During the last two years in the league, Straub has become one of the audience favorites and said her character’s Facebook fan page has more than 300 likes.

Straub became a fan favorite after her first wrestling  match in the league, when she defeated seven-time CLLAW champion the Killer Bee. Straub said she tied with the Killer Bee and had to spin the “stalemate wheel,” which is spun to decide a playoff competition between the rivals. Straub’s event ended up being dancing, and she said she defeated her opponent by dancing her heart out and becoming a fan favorite.

“Now, whenever I go [to CLLAW] I still have people bringing my trading card from two years ago or [people] who remember me and I remember them or who like me on Facebook and I’ve never met them before,” Straub said. “It’s pretty cool—starting to build a fan base of strangers.”

Kelsey Miller, CLLAW coordinator and Karie’s sister, wrestles under the name Lumberjack Jill, which was inspired by her time spent in a Conservation corps in New Hampshire. Kelsey Miller said a lot more goes into these events and performances than meets the eye. Although the arm wrestling itself is real, the competitions are still works of theater, so CLLAW events have to be organized according to who fights, what the “drama” in each match may be and what possible antics might be used by the arm wrestlers, Kelsey Miller said.

According to Kelsey Miller, CLLAW events are held three times a year, traditionally with one event in the beginning of the year, one during the summer and another in the fall. Kelsey Miller said the arm wrestling matches are organized by a standard bracket system with the winning wrestlers advancing to the subsequent rounds until a champion of the CLLAW tournament is victorious. There is also an opportunity for wrestlers to be named “crowd favorite,” which is decided by the cheers of the audience and is usually won by one of the lady wrestlers who lost their match, Kelsey Miller said.

Brittany Meyer, aka Stone Cold Jane Austen, joined CLLAW last year and has only performed in one event prior to the upcoming CLLAW XXI. With little experience in theater—and essentially no experience as a lady arm wrestler or CLLAW attendee—Meyer was uncertain as to how theatrical her first performance would be.

“I was kind of taken aback by it because, until the week of [my first CLLAW], I was not aware that this was a part of a large interactive theater piece,” Meyer said. “I was under the impression that I would have like 10 minutes on stage total, between coming out and then leaving. You’re walking around the whole time, you’re constantly interacting with people and you will have to be in character as much as possible doing whatever you want to do.”

The names of the lady arm wrestlers are just as theatrical as the wrestling itself and take careful thought and consideration to craft, Meyer said. She is one of the few who have developed a character based on a preexisting professional male wrestler, in this case Stone Cold Steve Austin.

“I really wanted to have a wrestler’s name,” Meyer said. “I tried it with other famous wrestlers like Hulk Hogan, but I couldn’t come up with a good gimmick for that…. We kind of put the idea together of Stone Cold Jane Austen, which is kind of the perfect feminine twist for this character.”

Most CLLAW events feature a variety of activities aside from arm wrestling, according to Straub. She said the Feb. 13 CLLAW event will feature bands Gay Name and Swimsuit Addition playing live during the intermission and, like always, audience members will get to bet on the lady wrestlers of their choosing by using “CLLAWBUX,”  which designate proceeds to go toward 826CHI, a nonprofit writing and tutoring center in Chicago, Straub said.

“It’s like 30 percent competition, 30 percent freak show carnival … and it’s like 100 percent chaos,” Straub said. “It’s 100 percent awesome is what it is. There is so much going on, there’s constant entertainment, whether it’s the actual match or the stuff we do in between…. the audience is just as much a part of the show and the energy and the atmosphere as anybody else.”

Alisa Rosenthal, who wrestles under the moniker Marie Armtoinette, said while all the wrestlers strive to be theatrical and win their matches, each wrestler approaches participating in CLLAW in her own calculated way.

“Everyone is coming from a different place, like I’m coming from theater,” Rosenthal said. “Other people, like Macho Ma’am, that’s a lifestyle. She does an awesome job of really being that character and getting people pumped up on Facebook because she’s coming from the athletic side, and other former champions are real tough chicks, but I kind of ride on charisma.”

With audience satisfaction in check, the next priority for CLLAW is the fundraising, and the organization it will partner with changes from one event to the next. Kelsey Miller said the charity partnering is a leftover concept from the original Charlottesville league—but the chosen organizations are always art-based.

Karie Miller said the Collective of Lady Arm Wrestlers has spread to more than 30 different leagues throughout the U.S., all of which are based on philanthropic ideals, although each league chooses its own charities.

“It’s important that it stays philanthropic like that—that’s a big cornerstone of this CLAW idea,” Karie Miller said. “The one in Charlottesville would raise money for a different charity each time they did it. There were elements of [the league] that we wanted to preserve, and that was a really important one.”

Along with scoping out various arts charities, Karie Miller said CLLAW is also focused on ensuring the audience members remain comfortable, even if things get crazy.

In the end, it is all about having a good time, whether it is the prizes won from betting on the winners—which can be a delight—or a dollar-store pregnancy test from betting on a loser, the kissing booths or interacting with the wrestlers who walk through the crowd, Karie Miller said.

“In some ways, it’s like you’re going on this crazy road trip with a bunch of people you don’t know and they’re completely bonkers,” Karie Miller said. “But you just trust that it’s going to be fine because CLLAW says you’re going to get to the other side OK.”