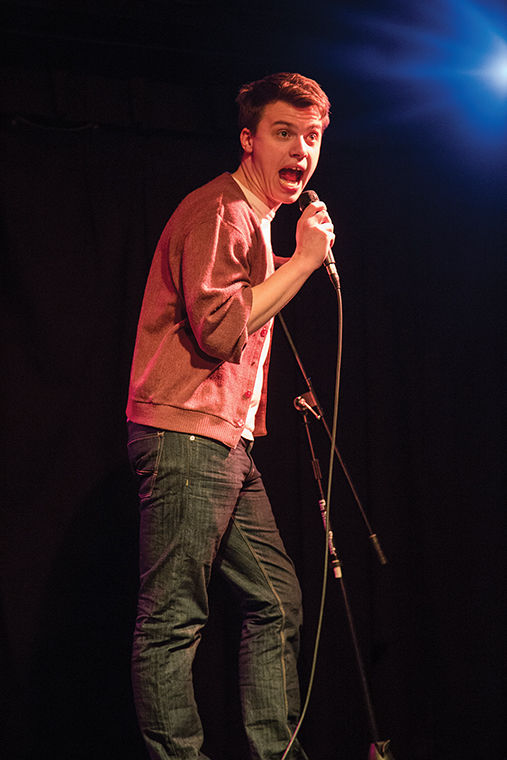 Ethan Burk, a junior theatre major, expresses his hate for celebrating birthdays on April 11 during “Wise Ass,” the college’s comedy night series hosted at the HAUS in the 623 S. Wabash Ave. Building.

The event, held April 1 at the HAUS in the 623 S. Wabash Ave. Building, was hosted by the Student Programming Board and the Business & Entrepreneurship Department’s “Club Practicum” class. It was headlined by Chicago comedian Tristan Triptow. Ten comedians and improv acts performed routines on topics such as relationships, sex, jobs, birthdays and music.

Sydney Back, a sophomore theatre major, emceed the event and noting it was the first time she has hosted a stand-up gig.

“It was a really fun show,” Back said. “The crowd was really into what was happening, which was nice. All the comedians did really well. I don’t think anybody bombed.”

Back, who has been involved in comedy for three years, said she participated in a Columbia comedy show last fall.

To prepare for the show, Back wrote comedy bits and planned the crowd work she wanted to do. She said she was nervous before hitting the stage but was able to feed off of the audience’s enthusiastic energy.

Two friends, sophomore theatre majors Joey Panelli and William Walton, performed an improv act together. They asked the audience to name a location, and someone suggested a bakery shop. The performers described their act as a learning experience in a donut shop between an owner and his young employee.

Panelli and Walton, who were performing together for the first time in front of an audience, said they were both nervous before hitting the stage, especially because nothing was planned.

“Right before I go on stage, I freak out a little bit because literally anything could come out of my mouth, and it could be a success or a complete disaster,” Panelli said.

Junior theatre major Ethan Burk said he has not been doing stand-up lately and wanted to jump back into it after spending a lot of time writing in his room. Recently having turned 20, Burk made jokes about how he hates celebrating birthdays and birthday parties.

“The truest part of comedy is truth,” Burk said. “When you do something that you really connect with and really feel, that is when you get something truly unique.”

Burk has previously performed at three Wise Ass events and said he was happy with how successful this performance turned out compared to others.

“Stand-up is one of the most terrifying things in the entire world because you are the actor, the director and the writer,” Burk said. “So everything could just go wrong, but when you do well, it’s the biggest high.”

Anjel Lopez, president of the Student Programming Board and a senior business & entrepreneurship major, said the group puts on these events to help students get real-life experiences and give them a place to show off their talent.

“I think it is a really good practice for the improv and comedian students to have the opportunity to do something a little bit different than a pre-programmed show,” Lopez said. “I don’t think there are a lot of opportunities for them besides clubs and things like that.”

Lopez said she would like to see more improv groups come out and perform at Wise Ass because they bring flare.

“I think tonight went really well,” Lopez said. “We had a really good turnout, everything stayed pretty steady and the comedy was good quality compared to other times I’ve seen it.”

The Business & Entrepreneurship Department’s “Club Practicum” class will host three more comedy series before the end of the year.