Moving up & moving in 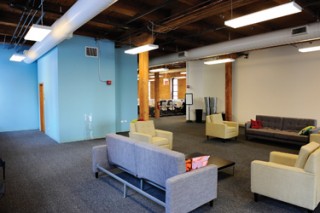 New and returning students can expect to walk into a new building with a window view of South Wabash Avenue, green cushioned chairs with tables and pink faux suede benches at 916 S. Wabash Ave. for the spring 2009 semester. The unit was formerly two separate buildings, the other being 1000 S. Wabash Ave.

The two buildings were scheduled to open at the beginning of the fall 2008 semester, but problems with power supply to the building caused the projects to be postponed, said John Kavouris, project manager in the Office of Campus Environment. Demolition of the original structures took six to eight weeks, and the reconstruction lasted about five months.

“We did the demolishing early to see what surprises we had,” Kavouris said. “We found the transformers were inadequate with all the technology we had.”

As reported in The Chronicle on Sept. 2, 2008, the transformer is located beneath the sidewalk in the front of the building and is used to take “high-voltage electrical power off the main power line, or ‘grid,’ and convert it to low-voltage electricity for use in homes or offices.” Kavouris said in the same article the transformer needed to be upgraded.

When Columbia acquired the buildings, they were two separate addresses, said Larry Dunn, director of special projects for Building Services.  They are now considered as one unit, to be called the “916 Building.” The only entrance to the unit will be on the 916 S. Wabash Ave. side of the 916 Building.

After the buildings were renovated, they became one unit, and the division between the two no longer exists, Dunn said. The 1000 S. Wabash Ave. side, however, has one elevator that goes up only two floors.

The 916 S. Wabash Ave., portion of the building will be used for office space,  gathering areas for students and student organizations instead of classrooms because of building code restrictions, Kavouris said.

“We couldn’t put classrooms in the 916 Building because of the timber frame,” he said.

Walking up to the building’s second, fourth and fifth floors, students will be greeted with brick archways in a few of the stairwells and the spaces mentioned have wooden ceilings and pillars, as well as most of the original brick walls. Kavouris said the college hasn’t determined what will be on the third floor of the building yet, and it currently remains inaccessible.

Within the 1000 S. Wabash Ave., area of the building, new classrooms for the Interactive Arts and Media, Interdisciplinary Arts, Dance and Theater departments are completed. Some of the classrooms still have the original brick behind the dry erase boards, which was unable to be removed, Kavouris said.

“It’s nice looking,” said Annette Barbier, chair of the IAM Department. “It’s not your regular everything dry-walled kind of place. It has some character.”

Until August 2005, the IAM Department operated as two separate entities-the Interactive Multimedia program and the Academic Computing Department. Barbier is the first chair of the combined department.

“The two different units persisted in having their own spaces,” she said. “There was no space where we could all be in the same place.”

She said the department did everything to lessen the historical divide between the two, but having this one space will help.

Also in the 1000 S. Wabash Ave., portion of the building is a main server room on the first floor solely for the IAM Department with its own separate cooling system, Kavouris said. The room was one of the many reasons the transformers needed to be upgraded last fall.

Students can also expect to see energy saving lights in many of the corridors and efficient use of power in every room of the new unit.

Dunn said all the rooms in the building are equipped with occupancy censors, which turn off the lights automatically when they don’t sense movement. The occupancy censors help the college save on energy costs, he said.

The other main department to make use of the facilities is the IDA Department, chaired by Michelle Citron.

Citron said her department is looking forward to moving into a new space, as it has been traditionally spread throughout different Columbia buildings.

“We’re really happy,” she said. “We’ve been spread out over eight blocks. We’ve gone from being in four places to being in two places only three doors down from each other.”

Citron also said this move isn’t only helpful for improving communications within the department, but also with improving interactions with students. She said most of the true learning in the department happens outside of the classroom.

For example, when a faculty member happens to walk in the same space while a student is working on a project, it has the potential to enhance the work, she said.

“Having one space really helps us have more of those spontaneous interactions that can lead to surprising and wonderful things,” she said. “That’s why one space is really important.”

The fourth floor, where the student organizations are located, has a large empty space that will be used for events such as Student Government Association meetings,  student organization gatherings and performances, said Aldo Guzman, director of leadership in the Office of Student Engagement and SGA adviser.

Guzman said he and his staff were excited to move to their new home from the Hub in the basement of the 1104 Center, 1104 S. Wabash Ave.

“The students wanted a space; the student organizations said, ‘We need to have a space for us to get together, to network and thrive together,'” he said. “The institution saw that need, they valued that need and they turned around and said, ‘Here it is.’ It’s definitely a step in the right direction.”

Kavouris said the budget for the project was tight, but everyone was happy with the way it turned out.

“We squeezed a lot of that budget,” he said. “We got a lot of value out  of this building for the money we put in.”