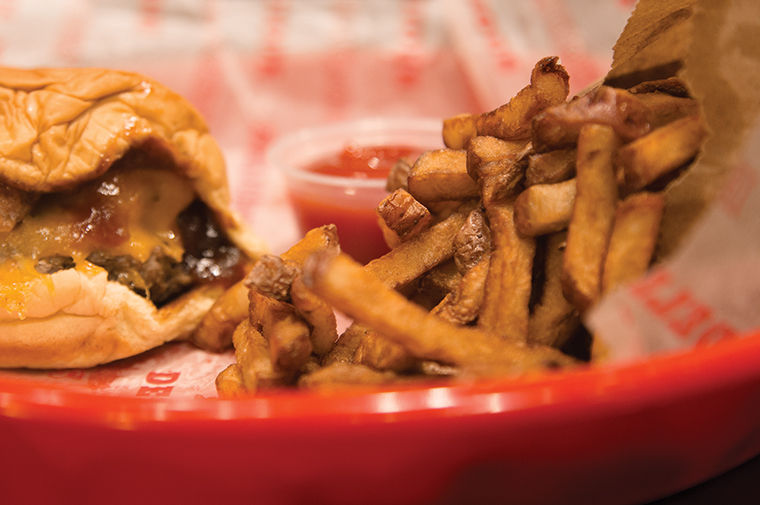 With so many burger joints in Chicago, was there ever really a need for the Washington D.C. restaurateurs of Good Stuff Eatery, 22 S. Wabash Ave., to open shop in the city? Traditional burger and shake fans will be too busy eating to fret about that question.

Straight from the mind of “Top Chef” Season Four finalist Spike Mendelsohn and his family—Cathy, Harvey, Micheline, Suzie and Peter Polatos—Good Stuff Eatery is a family operation built around the concept of an old-time diner. Good Stuff Eatery includes all the classic American favorites one craves—handcrafted burgers, hand-cut fries, hand-spun shakes and fresh salads all made with the highest quality ingredients.

The restaurant’s interior keeps it simple. Rather than throwing a bunch of designs on its walls, Good Stuff goes for the nostalgic burger shop feel, complete with old-style booths and a spacious dining area.

The restaurant brought along some menu favorites from its original home in Washington, including the prize-winning Prez Obama Burger ($7.25), an all-beef burger with Roquefort cheese and horseradish mayo, and the Steakhouse Burger ($6.98), topped with roasted cremini mushrooms, onion straws, Emmental Swiss cheese and steakhouse mayo.

While the eatery boasts many positive qualities, Good Stuff is not without its flaws. For the price paid for a hamburger, fries and milkshake, customers might expect to get something slightly bigger than a White Castle slider. While very appetizing, the Colletti’s Smokehouse Burger ($7.25)—featuring applewood bacon, sharp Vermont cheddar and fried Vidalia onion rings with chipotle BBQ sauce—was barely the size of a fist and will likely leave customers craving more. Good Stuff’s overly seasoned Spike’s Village Fries ($3.89)—which are hand-cut french fries topped with fresh thyme, rosemary and sea salt—are a greasy smattering of fries, lacking any crispness.

If any part of Good Stuff’s menu stands out, it is not the burgers, but the large selection of shakes and icy beverages. The restaurant’s choice of shakes and floats brought a sense of timelessness to the restaurant—something hard to find at other local eateries. From the Milky Way Malt ($5.95) to the Salty Caramel Kiss ($5.95), Good Stuff brings sweet and savory to every order. Although the milkshakes might get people’s attention, Good Stuff’s Root Beer Float ($3.75) gives the restaurant the classic feel of an old-time soda fountain.

The wait for the food is nothing to grumble about. The staff was friendly, ready to suggest menu items and offer advice for each order. While the newly opened restaurant was booming with hungry patrons, the food was ready within minutes of ordering.

With the restaurant’s variety of menu items and casual, spacious dining, Good Stuff has something for any burger lover. If burgers are not appealing, the menu also includes a variety of salad options, including the Greek Wedge ($7.49), which is topped with tomatoes, cucumbers, green onions, Kalamata olives, feta cheese, freshly snipped dill, toasted sesame seeds and a virgin olive oil vinaigrette.

For fans of Mendelsohn, whether it is from his time on season four of “Top Chef” or his other restaurants, Good Stuff has the signature flair of the well-regarded chef. Although the restaurant has its flaws, Good Stuff Eatery fits right in along with its Chicago neighbors.