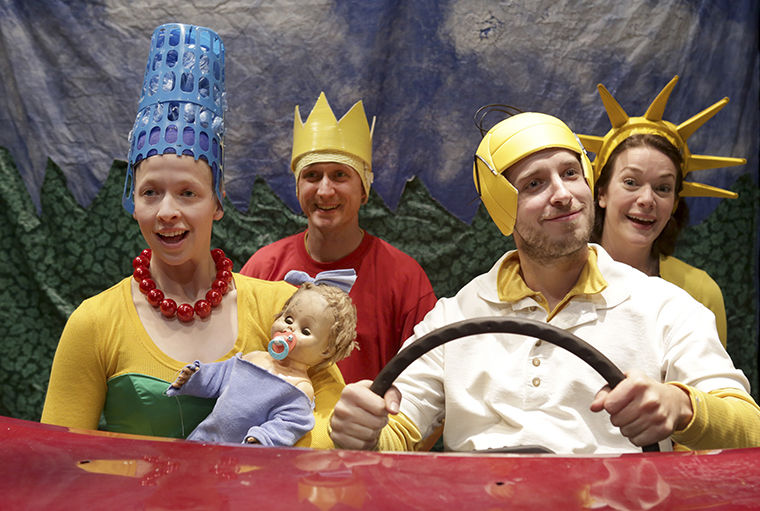 Every so often, a theater company takes a chance on a play that may reach toward a specific demographic not yet familiar with traditional theater. Theater Wit, 1229 W. Belmont Ave., is appealing to fans of “The Simpsons” with its adaptation of playwright Anne Washburn’s critically acclaimed “Mr. Burns, a Post-Electric Play.”

A post-apocalyptic tale of survival, the 110-minute “Mr. Burns” is centered around the story of the lone survivors of a nuclear explosion resulting in the decline of humanity as a whole. The destruction leaves the resulting group to manage with limited resources, which the actors portray in three acts, including one in which there is a complete reenactment of the classic “Simpsons” episode, “Cape Feare.” The reenactment follows Bart Simpson’s character as murderous killer clown Sideshow Bob stalks the young boy and attempts to murder him. “Mr. Burns” employs “The Simpsons’” use of satire to grab the audience’s attention but has a much deeper message, said Theater Wit Artistic Director Jeremy Wechsler.

“The things that were more important to me in the play had less to do with the importance of ‘The Simpsons’ so much as seeing how we could take any story and transform it into the story we need it to be,” Wechsler said. “I think this started 6,000 years ago with the Old Testament, and we’ve moved forward from there. It is just a thing humans do.”

According to Jeff Trainor, who plays the characters Gibson, Homer Simpson and Sideshow Bob, many people come to see the play because they expect it to be about ‘The Simpsons” but stay for the complexity of Washburn’s play.

“It’s really attractive candy that Ann Washburn used to spark the idea of this show because some people come thinking it’s going to be all ‘Simpsons’ the whole show, and that’s not the case,” Trainor said. “But then they’re delighted and surprised that it took them on a ride they weren’t expecting.”

Hannah Gomez, who plays Colleen and Lisa Simpson in the play, said she was drawn to the play not for “The Simpsons” references, but because it was a creative exploration of survival when all is lost.

“I like plays that surprise you with meaning but aren’t didactic about it,” Gomez said. “You think, ‘Oh, this is a play about ‘The Simpsons,’ and truthfully it is, but it’s also about dealing with loss and survival and coping and how, as a society, we identify ourselves. That’s more of what drew me to [the play]. The play really is about community, and ultimately, theater wins in the play.”

A major theme in “Mr. Burns” is its use of popular culture references. The play includes nods to films such as “Star Wars” and “Lord of the Rings,” to name a few. While popular culture is undermined in certain works, Wechsler said, it is nearly impossible to live in a world that does not relate to pop culture.

“There is a tendency at all times to diminish pop culture as an insignificant force, but it is a key, critical defining force for everyone,” Wechsler said. “You can’t live in our world and not be touched by [popular culture]. With time, pop culture becomes classic.”

Trainor said this play has helped open a lot of people’s eyes to how reliant they are on technology rather than communicating personally with one another.

“There’s a friend of mine who saw the show and said, ‘I realized how terrible I am at communicating, and that if the electrical grid ever goes out, I’m screwed in terms of how I’ll talk to people,’” Trainor said. “It made him look inward [about] how he goes about his day.”

Wechsler said that theatergoers should not go into the play with hopes of seeing a three-act play set around America’s favorite yellow cartoon family. Rather, he said they should absorb the play as a reflection of society.

“‘The Simpsons’ episode should be thought of as a character in the story as much as any of the actual characters,” Wechsler said. “It’s really about what we do and make from the stories that we have.”