Robots take over Museum of Science and Industry 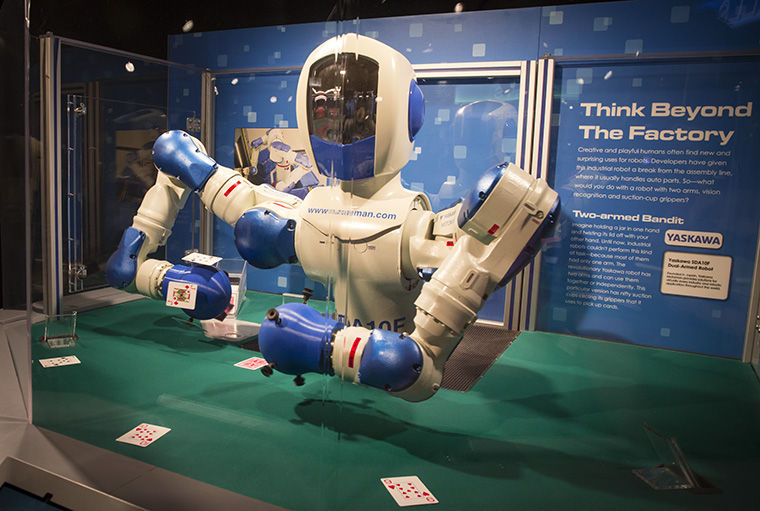 after visiting the museum’s Robot Revolution exhibit, guests could easily confuse Chicago’s Museum of Science and Industry for the set of a new post-apocalyptic movie in which the world is run by artificial intelligence.

The exhibit, which opened in May and is set to run until Jan. 3, features more than 40 robots from around the world, including interactive robots. Kathleen McCarthy, executive director of Robot Revolution, said the exhibit has been a big project that has partnerships with more than 30 companies worldwide.

Guests can watch 30 of the robots take part in “human-like” activities. Two large industrial robots have been programmed to play blackjack and tic-tac-toe with guests, McCarthy said.

Along with the industrial robots, the exhibit includes a robot that mimics guests’ facial expressions, small robots that play soccer as well as the therapy robot Paro, a comforting robot companion resembling a seal pup that can respond to the contact it is receiving as a pet would. Paro has been used as a therapy “animal” in nursing homes and hospitals.

“We knew from developments and advancements in technology that robots are soon going to be a more visible and vital part of our daily life. We wanted to give people a chance to engage with robots, the way they will in the not-too-distant future,” she said.

“A lot of these robots need ongoing maintenance to prevent them from breaking down,” said Jason Dornbush, a repairman from the Robo Garage.

Outside the Robo Garage is a station where guests can build robots out of small cubes. When the cubes are put together the right way, the robots will roll around.

The heart of the museum will feature a larger robot showcase  Oct. 10–12 for the museum’s Robot Block Party. McCarthy said the additional robots are experimental or unable to run everyday. Each day of the weekend will be packed with robot-related activities guests can participate in.

“We’ll be having robot dance demos each day where you can learn how to do the robot with the help of professional dancers from Culture Shock Chicago,” said Beth Boston, contact for the Robot Block Party from the Museum of Science and Industry. “We’ll be having student demonstrations from various robotics clubs, both high school and college level, that are really amazing to see.”

The “family-friendly” band Human-Tim + Robot-Tim is set to perform during the weekend as well, Boston said.

Boston added that the block party will include a station where guests can build their own robots to take home.

A piece Canadian multidisciplinary visual artist Max Dean collaborated on with robotics experts and completed in 2006 will also join the block party. The piece is a chair that appears to be a normal wooden chair but falls apart and puts itself back together again.

“It’s been shown in other art museums, but never in a science museum,” McCarthy said.