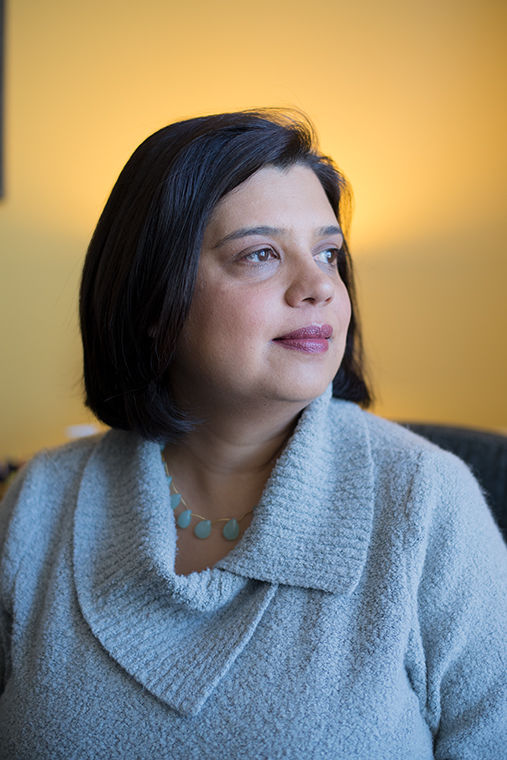 Neha Gill, executive director of Apna Ghar, Inc., poses for a photograph Jan. 17 in the organization's offices at 4350 N. Broadway.

Neha Gill was working on a women’s empowerment initiative with the University of Minnesota in Kenya when the group learned that gender violence can prevent women from becoming leaders.

Gill came back to the U.S. determined to continue her work to end violence against women. In 2003, she discovered Apna Ghar—which means “our home” in Hindi—a group based in the North Side that works to end gender violence in immigrant and refugee communities. In 2013, Gill became the organization’s executive director .

Gill, an immigrant from India, spoke with The Chronicle about her organization and its mission to end gender violence.

THE CHRONICLE: How did your personal beliefs and experiences lead to your work with Apna Ghar?

NEHA GILL: My mom is a real role model to me as someone who demanded equality in her relationship with my dad, and her relationships with other male family members. That was important to see how that shapes the way we move around in the world as women. The idea that we should be equal was ingrained in me, but as we get older in this patriarchal society, we realize that we are not always equal, and there is an extreme manifestation of [discrimination].

What services does Apna Ghar provide?

Apna Ghar’s mission is to end gender violence in immigrant and refugee communities in Chicago. It was started by first-generation immigrant women from the area who realized there were issues in their communities.

We have a shelter and transitional housing program, comprehensive case management to help people make educational, financial and employment goals, individual and group counseling, as well as family counseling, comprehensive legal advocacy around domestic violence issues, family law and immigration and attorneys who volunteer their time in a family law clinic. We do education outreach, as well as policy advocacy.

What is your response to people who assume that Asian cultures and communities are not accepting of women’s rights?

It is not a western notion that women have to be equal. It is understood in all societies, but it’s just that these manifest differently based on the laws and cultures in different societies.

There is so much now with the Me Too movement that we recognize more what is going on in the U.S. and have access to work for women, but then [women] might find themselves being harassed in the workplace anyway. Most societies around the world are patriarchal, so as long as it’s set up that way, there are going to be levels of discrimination and violence against women that is going to be part of those societies.

Violence manifests itself differently, like economic abuse or physical abuse, but it exists in one form or the other because the root [problem] is of seeing women differently.

Are people aware of the domestic abuse within immigrant communities?

The U.N. estimates that one in three women worldwide experiences [domestic] violence, but the immigrant and refugee communities are smaller. There tends to be a belief that abuse exists in larger numbers in those communities, but that is not necessarily true. It is not supported by any research. There are several other groups serving more “American” population, while we’re serving newer immigrants, only because we’ve developed cultural competencies, like staff that speak their languages and understand the immigration system.

People know what’s going on, and the issue is “What are we going to do about it?” What is going to happen to make this stop? That will have to be something societal, something huge, which is what “Me Too” and “Time’s Up” are trying to accomplish: a real societal shift. Otherwise, we’re going to keep naming a few people who have done some very egregious things and then they are vilified, but nothing is really changing. The conversation needs to shift from “Why doesn’t she leave or why doesn’t she do something [about the abuse]?” to “Why do the people who are abusing, abuse? And shouldn’t it stop?” Women are vulnerable to so many forms of violence …  it can exist in so many spheres of their life. People have to take accountability.

How does Apna Ghar differ from other domestic violence shelters in Chicago, and what challenges do you face with the community you serve?

Our work is different just because it is based in a different philosophical understanding. I think we have always approached it from a human rights perspective, so it has always been advocacy focused and based. It is not only about the services. We are always thinking about the holistic service.

For the immigrants we are serving, it can be a challenging process because in addition to the violence they’re experiencing, they’re very unfamiliar with everything around them. They may not speak the language, or they may not know what to expect if they were to call the police. Some of the violence they might be experiencing is being told that as an immigrant they don’t have rights, so if they call the police they might be deported. There is misinformation, which is a huge barrier for them. So part of our job is to get the information out there that they do have rights and that we do know how to support them and help them access remedies that are available to them.

What do you hope to do with Apna Ghar in the future?

The organization is foundationally strong, and it has so much potential. What I hope to do for the organization is help it grow. We’ve always been in Chicago, but last year we opened an office in Skokie, [Illinois], and we’ve expanded in the courts and have some medical partnerships. We’re trying to figure out how to better assist college campuses in the area about sexual assault that students might experience. We’re thinking about different ways in which we can take what we know and assist other communities and professional groups to grow regionally, nationally. We are trying to work on what we’ve done here, and spread it all over the world.