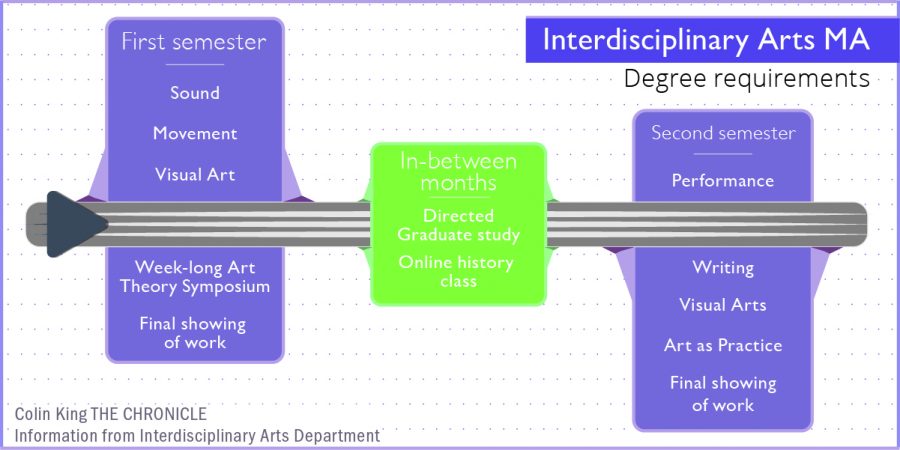 As most students head home for the summer, Columbia will be debuting its first low-residency graduate program, an intensive experience within the Interdisciplinary Arts Department during the Summer 2015 semester.

The new addition is a restructuring of the Interdisciplinary Arts master’s program. Focused on advancing the education of working artists and art educators, the program is designed to give students the opportunity to hone industry skills and lift them into another realm of professionalism, said Jenny Magnus, an adjunct professor within the Interdisciplinary Arts Department.

The program, currently offered as a one-year sequence, will give students the option to complete the program during two consecutive, intensive nine-week summer sessions on campus and an independent study during the interim year.

Developed with the working artist in mind, the eight- to 10-student program was designed to make it easier for professionals already in the industry to complete the degree, said Jeff Abell, an associate professor in the Interdisciplinary Arts Department and master’s program director. Abell said many potential students have expressed a strong interest in the concept in the past but did not have the time to take three or four classes each week.

Condensing an entire program into two summers means students will be expected to complete the same number of hours in a shorter, more intense period of time, paving the way for complete immersion into the arts, said Magnus.

During the first summer, students will take classes in the sound, movement and visual arts, while the second summer will have students taking classes in performance, writing and professional practices. Students will also participate in a week-long art theory symposium and present the work they create throughout the program.

According to Abell, this is equivalent to what graduate students would do during the regular program, with the exception of an art theory class called “Art as Discourse.” The class, which usually takes place throughout a 15-week period, will instead meet as a five-day intensive seminar.

While the condensed classes will not offer the exact same experience, the change presents further opportunities for student learning, Abell said.

“It’s another thing to plunge into something that you’re doing day after day, but I actually think that’s what’s exciting about it,” Abell said.

During the interim months, students will complete a directed grad project, working closely with a mentor from the Interdisciplinary Arts Department to create a specific, contracted project. They will also be required to participate in an online history course. The time will also give students a chance to apply and adapt what they learned during the first summer, Abell said.

“There’s this potential for what you learn in that first summer to percolate and grow and evolve and change before you come back for the second half of the whole thing,” he said.

Magnus said the restructuring of the program works in favor of both the students and the college, utilizing space and resources that would otherwise go untouched during summer months.

“That’s part of the administrative brilliance of it,” Magnus said. “It isn’t redesigning the wheel. It’s taking something that already exists and plugging it into these big, empty, gaping holes of almost nothing going on on campus during the summer.”

The introduction of this redesigned program could be part of a collegewide goal to expand on graduate study programs across all majors. At a Feb. 3 Student Government Association meeting, Senior Vice President and Provost Stan Wearden expressed the college’s interest in attracting more graduate students to the college.

“We haven’t really done much with graduate enrollment here,” Wearden said. “I’d like to see us start designing some professional master’s programs, many of which I feel could be offered either partially or fully online.”

Magnus said the shift reflects a growing trend among colleges seeking out ways to bring better value to education. According to Magnus, the new program does just that, which is what makes it so attractive to both administration and prospective students.

“I think this program changes lives,” she said. “I’ve seen it happen. I find it really exciting to find a new way to offer that to people.”