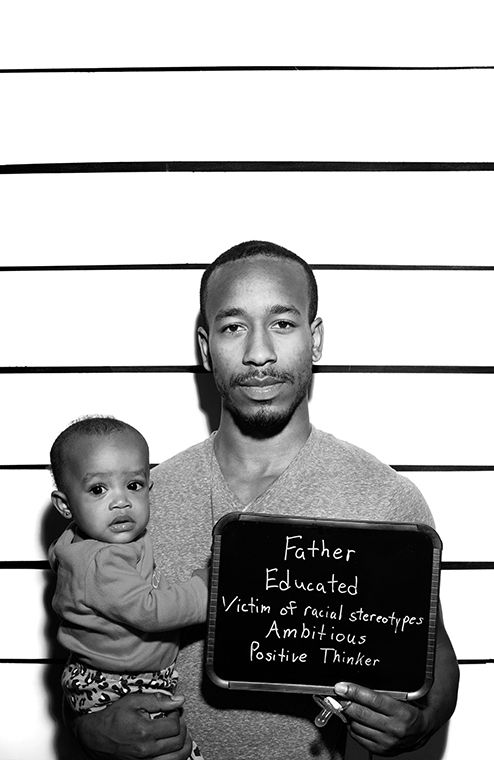 Photographer Imani Amos gathered 50 black male friends and took mug shots of them to draw attention to prejudice and racial stereotypes they experience in Chicago.

Freelance graphic designer and photographer Imani Amos uses the power of art to question prejudice in Chicago by focusing on racial stereotypes and profiling in her photo exhibit “50 Shots: Humanizing America’s Most Hunted.”

Amos said she gathered 50 of her black male friends in Chicago and took their mug shots as part of the photo project in an effort to start a community discussion about racial profiling. Amos said she asked herself, “What would the community of Chicago lose if these men were sent to jail?” She said she told the men to hold signs displaying five characteristics about themselves that someone would not know based on their physical appearance.

“I hope people start to reconsider how they feel when they see other human beings that they have preconceived notions about,” Amos said. “I hope people think twice before they jump to conclusions. We often assume because we see things in the media, but we don’t really know.”

Amos said she came up with the concept for her project three years ago when she realized she wanted to creatively communicate that there is more to people than their appearance and that her male friends did not deserve to go to jail simply because of their race. Amos said she chose 50 men to photograph because she wanted an overwhelming number of faces that would make viewers stop and reflect.

Lindsey Meyers, owner and curator at the Beauty & Brawn Art Gallery and Think Space, said she is a firm believer in Amos’ work and that the response to it has been extremely positive so far. The opening reception for the exhibit took place March 21 during the gallery’s three-year anniversary celebration.

“This show has a sociological component that may open up a dialogue that a lot of people aren’t comfortable having,” Meyers said. “As difficult as those conversations can be, I’m really honored to post work like this and to be able to facilitate those conversations.”

Meyers said her gallery is a family-friendly space that encourages  art education by sparking important discussions regarding the significance behind each exhibit.

“Everyone that has come through has a really good spirit and is looking for that conversation,” Meyers said. “I hope people come and see a different perspective of Chicago art than they have seen before.”

“The photos have a beautiful view as you go through the images,” Aguirre said. “These images really spoke to me because they have such a contrast. They have many different perspectives of men.”

Aside from showcasing “50 Shots” in Chicago galleries, Amos said she hopes to recreate the project in St. Louis and New York by taking photos of men from those cities. Amos said she also wants to take her photo exhibit to Chicago Public Schools and open the discussion of cultural prejudice to a young audience.