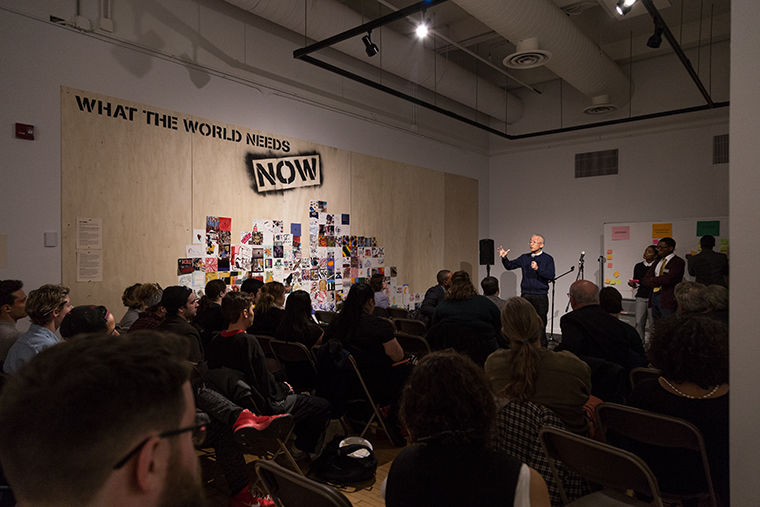 President and CEO Kwang-wu Kim spoke with Columbia students at a "Let's Chat" event Tuesday, Nov. 14. Among the topics discussed were acces to facilities, staff shortage, the student center, and better forums to discuss issues at hand. The event was put on by SGA. 623 S. Wabash Ave.

President and CEO Kwang-Wu Kim addressed students’ frustrations about the construction of the student center, students’ access to resources on campus and a variety of changes made to class offerings at a Nov. 14 Student Government Association-hosted forum.

“Let’s Chat with Dr. Kim” was held at the Hokin Gallery in the 623 S. Wabash Ave. Building. Kim was also joined by his cabinet members, including Senior Vice President and Provost Stan Wearden, Vice President of Business Affairs and CFO Jerry Tarrer, and Vice President of Student Affairs Sharon Wilson-Taylor.

Kim told students during the event his primary focus is to strengthen the quality of the college’s business and curricular operations and communicate its quality to the rest of the world.

“There’s a real [communication] gap in terms of what actually happens at this school,” Kim said. “That has a lot to do with the fact that we have not been particularly effective, historically, in telling our own story.”

But some students still were not satisfied. Megan McGowan, a senior cinema and television arts major, asked Kim during the assembly why money is being allocated to an estimated $50 million student center when classes are being cancelled and open lab hours have decreased.

Student resources such as free printing have become limited, and multiple classes in the English and Creative Writing Department are now being offered on an every other semester basis due to lower enrollment and budget cuts, as reported Oct. 23 and Nov. 13 by The Chronicle.

Kim said most of the funding for the student center is coming from the sale of the University Center dormitory instead of tuition revenue.

The University Center was sold July 20 for $201 million, which was split among Columbia, DePaul University and Roosevelt University, as reported Sept. 12 by The Chronicle.

“Not to diminish the importance of figuring out if we need to address classes going away that are essential or access to studio time, but what’s not possible for the college to not think about would be to take a permanent asset and not reinvest it into something that is permanent,” Kim said.

Before holding a conversation about the minimized student resources, Kim said the college needs to hear concerns from not only students, but also faculty regarding how many hours facilities need to be open to maximize student effectiveness. He posed the question of whether the student center should be open 24/7 or run on extended hours.

Students responded with uncertainty about how to express their concerns to the administration. Suggestions for better communication included Kim sending out more collegewide emails, students attending SGA meetings, and taking better advantage of office hours with administration.

SGA is planning to host town hall meetings with department chairs and deans after Thanksgiving break to help students become more familiar with leaders in their department and directly communicate with them regularly, according to SGA President and senior business and entrepreneurship major Malik Woolfork.

McGowan said she was frustrated about classes being cut and the limited resources but thought the discussion with Kim was beneficial.

“Students didn’t feel there was a way to communicate to the higher level staff,” McGowan said. “This was a great way to begin bridging that gap.”