Criminal justice reform bill has friends, foes on both sides 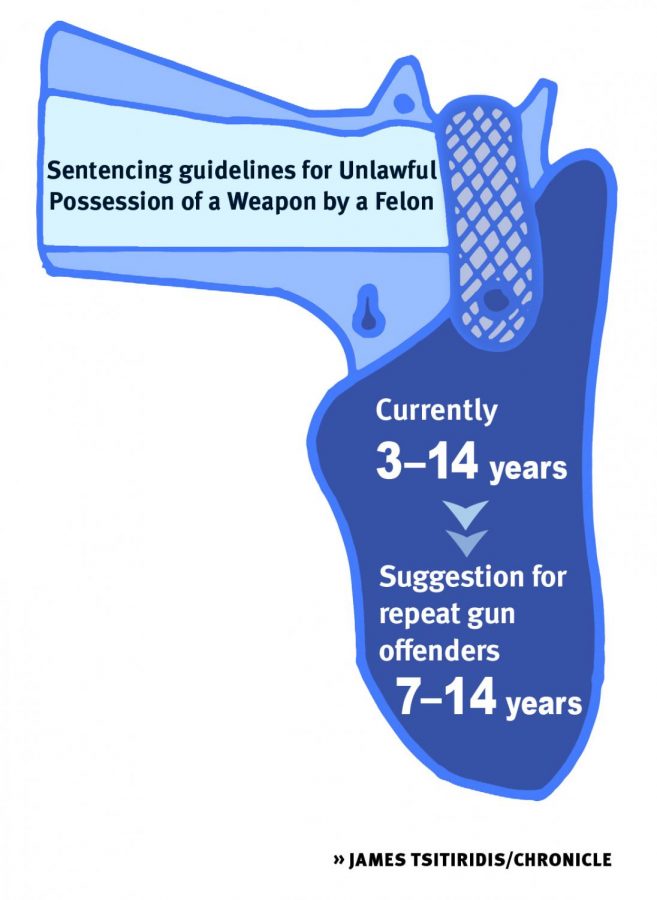 Criminal justice reform bill has friends, foes on both sides

As the cycle of violent crimes in the city continues, state lawmakers continue to push for policies that better combat gun violence.

The latest initiative promotes longer sentences for repeat gun offenders and alternatives to incarceration for some drug crimes. However, according to senators, the legislation is leaving the Illinois Senate divided but not entirely along party lines.

The Senate Criminal Law Committee passed the bill 6-5 on March 9; it is currently awaiting an unscheduled full senate vote as of press time.

Raoul said the media has been mischaracterized the bill as increasing the existing range and removing judicial discretion. The maximum sentence is still 14 years, and judges can depart from the statutory sentencing scheme when circumstances warrant it. The bill will also tackle drug crime reform by providing alternative community-based programs to non-violent drug offenders, who become eligible for up to a 15 percent sentencing reduction, he added.

“Whatever attempt to rehabilitate [repeat offenders] in the short term of their previous sentence was unsuccessful,” Raoul said. “Because they hit the street again illegally with a gun.”

Raoul said support for the gun sentencing portion of the bill is bipartisan, and Republicans have asked for a separate vote on the provision dealing with drug sentencing alternatives.

The reforms in the bill were recommended by the Criminal Justice Reform Commission, a bipartisan group formed by Gov. Bruce Rauner, and would  reduce the prison population by nearly 1,500, saving $62 million over a period of 10 years, according to Raoul.

Some lawmakers dispute whether the bill will deter violent criminals or save money, causing senators to depart from political party lines.

Sen. Patricia Van Pelt, D-Chicago, said she opposes the bill because increasing sentencing penalties does not reduce crime as research shows many are carrying guns out of fear for their lives.

“If I was afraid for my life, and I was carrying a gun to protect myself, an extra year sentence would be better than being dead,” she said.

According to Van Pelt, the state spends $30,000 to $50,000 annually per inmate so longer sentences means that the incarceration budget must be increased proportionately to accommodate the conceivably larger prison  population.

Rather than spend money to keep criminals behind bars, Van Pelt said more should be allocated to human service agencies that were once a safety net for communities, including mental health clinics, school programs and Redeploy Illinois, a treatment alternative for convicted juveniles who would otherwise be incarcerated.

“[Violence] will go down when we put something in the community that provides outlets for these kids who are running around, and also deal with the big problems that they have: a lack of jobs, lack of opportunities,” Van Pelt said.

Turheran Crawford, founder of Not On My Block, a Chicago-based mentorship program for adolescents who are regularly exposed to neighborhood violence, said as someone who previously served time and communicated with gang members, criminals are not “street savvy” when it comes to the law. In order to deter crime, criminals need to be made aware of the enhanced penalties through outlets such as social media, Crawford added.

“There’s got to be a way to let them know the laws have changed and you are going to get more time when you get a gun, or [the bill is not] going to matter [either] way,” Crawford said.

“What we are trying to do is  create a mentality [and] culture of accountability, so [criminals] will think twice before they pick up a gun,” Johnson said. “ There is a deterrent if they know [lawmakers] are serious about holding them accountable.”

Judges in Illinois may soon be recommended by state lawmakers to enforce stricter sentences for repeat gun offenders.

The Safe Neighborhoods Reform Act, Senate Bill 1722, passed the Illinois House, 70–41, May 29. Introduced by state Sen. Antonio Munoz, D-Chicago, the act will allow Illinois judges to continue sentencing gun offenders who unlawfully possess a weapon to incarceration on the already existing three–14-year sentencing range but encourages judges to sentence on the higher end of the scale—seven–14 years—for repeat offenders, according to state legislative records.

“This bill would finally hold repeat gun offenders responsible for their crimes,” Mayor Rahm Emanuel and CPD Superintendent Eddie Johnson said May 29 in a jointpublic statement in response to the House’s vote. “It is an important step to improving public safety in Chicago and Illinois, along with expanding alternatives to incarceration for first-time non-violent offenders, investing in economic development and strengthening social services.”

The bill, which passed the Senate, 35–9, April 6, will also enact alternative community-based programs for nonviolent drug offenders, who become eligible for up to a 15 percent sentencing reduction. It will also establish the Violent Crimes Intelligence Task Force, which will be led by the Illinois State Police to reduce and prevent illegal use and possession of firearms, according to state legislative records.

Since the bill’s introduction, it has been in contention. Some lawmakers dispute whether the bill will deter violent criminals or save money, causing them to depart from political party lines. State Rep. Thaddeus Jones, D-South Holland, filed a motion to reconsider the vote, which could allow for more amendments to be attached, according to state legislative records.

Jones, a member of the Illinois House Black Caucus, said the bill is incomplete and needs more attachments to achieve true reform.

“[The caucus] believes gun violence should be declared a public heath crisis,” Jones said in a May 30 email. “The caucus will review the timetable on the hold and will work for a better solution. This bill does not provide that solution.”

If the motion were removed, it will then proceed to Gov. Bruce Rauner who plans to give the bill the go ahead.

“This bill is an example of what is possible when people come together in good faith to improve our communities,” Rauner spokeswoman Eleni Demertzis said in a May 25 public statement in response to the House Judiciary-Criminal Committee approving the bill. “This legislation will ultimately make our communities safer, and the governor looks forward to signing it when it reaches his desk.”