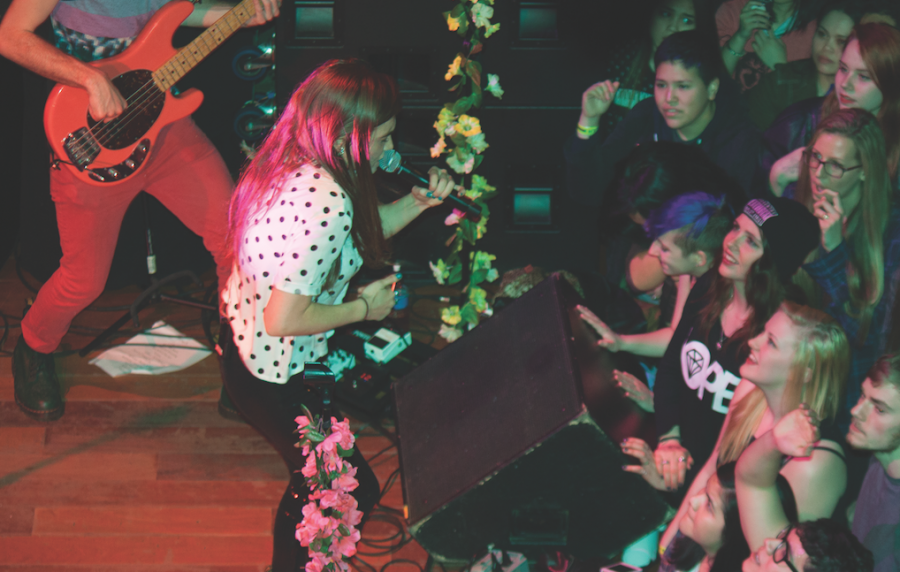 MisterWives’ electric set shook the crowd on March 3 at Lincoln Hall, 2424 N. Lincoln Ave., playing through every song from its debut album Our Own House, released on Feb. 24 through Photo Finish Records.

The New York City-based sextet’s upbeat feel-good, indie-pop songs kept the crowd dancing through its hour-long set. Despite this only being the fifth show on the band’s first-ever headlining tour, MisterWives did not show any sign of nerves or uncertainty.

The group is composed of Mandy Lee (vocals), Etienne Bowler (drums), Will Hehir (bass), Marc Campbell (guitar), Michael Murphy (saxophone) and Jesse Blum (piano, trumpet and accordion). The band met in late 2012 and played its first show on Feb. 1, 2013 under the name MisterWives, which is a play on the 19-century Mormon term Sister Wives. The bands happy songs are influenced by bands similar to No Doubt, The Police and Walk The Moon.

After forming in 2012 and signing to Photo Finish Records after just one year, MisterWives has slowly begun to gain popularity in the indie-pop community. The band’s fan base grew tremendously after it opened for the alternative synth-pop band Twenty One Pilots on its fall 2014 tour. Only a few months after the end of the tour, MisterWives is already playing a plethora of sold-out headlining shows across the U.S.

When the band strutted on stage and began playing the opening notes of its album’s title track and name of the tour, “Our Own House,” attendees broke into smile. When the song came to an end, drummer Bowler walked up to a microphone and informed the crowd about his incredibly strong feelings for the friendly demeanor of  the citizens of Chicago and the city’s infamous deep-dish pizza.

All five members of the band lined up along the front of the stage at the beginning of “No Need For Dreaming,” clapping with their hands and stomping their feet to get the audience into the song. After the band reassembled, the dancing ensued and lead singer Mandy Lee—who was decked out in a pair of black-sequin pants that caught the glow of the lights perfectly—showed the crowd she was ready to party with a shake of her hips.

Four songs into the set, the band slowed down with “Oceans,” which had a beachy, West Coast vibe. The sweet, slow-tempoed love song had the crowd swaying and happily screaming, “Let’s run with reckless emotion/ Let’s find out if love is the size of the ocean/ And a hundred ought to be too few words/ To carry all my love for you.”

Perhaps because this was MisterWives’ first headlining tour, the band continuously expressed its gratitude for the audience. At one point, bassist Hehir told the crowd he got “MW” tattooed on his fingers so he would never forget this tour.

“Now I realize that was stupid because, tattoo or not, there is no way I will ever forget tonight,” Hehir said.

As Lee caught her breath after bounding back and forth across the stage throughout the show, she talked about the band’s song “Vagabond,” which is from its debut EP Reflections, and its full album. The song has a calm and serious tone, addressing a low point in Lee’s life in which she felt like she did not fit in or belong. The subject matter did not keep her from expressing vulnerability during her performance as the sad, reminiscent inflection in her voice became more and more noticeable.

MisterWives began to close out the main segment of the set with its most well-known song “Reflections,” a catchy pop anthem that induces dancing. The set ended with the nostalgic hometown anthem “Queens,” a song about the neighborhood of Queens in New York City, where Lee grew up. She strutted off the stage chanting, “We all lift each other up/ Learn to shake the demons off/ Conquer all this world throws at us/ ‘Cause love is strong enough,” as the lights went down.

MisterWives did not miss a beat. The band closed the show with its own rendition of Mark Ronson and Bruno Mars’ hit “Uptown Funk” followed by “Imagination Infatuation.” When Lee sang the song’s final “Oh-oh’s,” the band stood and smiled at the crowd, yelling their last “thank yous” and words of gratitude before walking off the stage, leaving the crowd yearning for more.