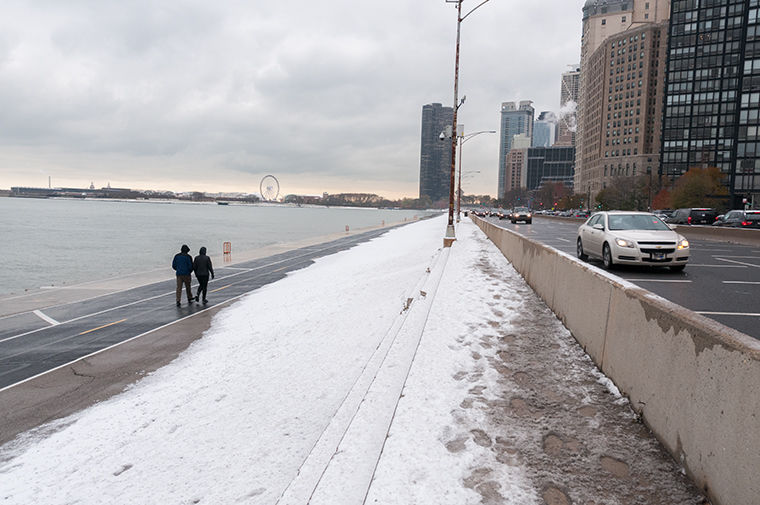 A designated walking/biking section of Lakeshore trail runs parallel to Lake Shore Drive, which has a 40 mph speed limit, and some vehicular access points.

After a man drove onto a New York City bike path Oct. 31 and killed eight people, local bicyclists are concerned about the security of Chicago’s bike paths.

Sayfullo Saipov drove a rented truck onto a section of the Hudson River Park Bikeway, entering at an exposed access point. Chicago’s Lakefront Trail, an 18-mile-long stretch that extends from Ardmore to 71st streets, resembles the New York city bikeway.

A bike path is a paved walkway or greenway designed specifically for bicycles or pedestrians while a bike lane is a designated bikes-only portion of a street.

“It’s not uncommon for there to be [bike] collisions on Lakefront Trail, especially in the congested areas between Navy Pier and Fullerton Avenue during peak times,” Greenfield said. “The severity of crashes that happen on the street are a lot worse because they involve motorists.”

In 2011, the city outlined a plan to have 100 miles of barrier and buffer-protected bicycle lanes by 2015, according to the Chicago Streets for Cycling Plan 2020. According to a report from the League of American Bicyclists, Illinois ranks No. 16 in the U.S. for bicycle friendliness, and there are 7.5 fatalities per 10,000 bicycle commuters in the state.

There has been an improvement to Chicago’s bicycle safety in the last 10 years, said P.S. Sriraj, the director of Urban Transportation Center and professor at University of Illinois at Chicago.

“I would put Chicago bike lanes on par with what you have in other parts of the country,” Sriraj said.

While it is impossible to block car access to Lakefront Trail, Greenfield said the city could make it difficult for someone to intentionally access the trail with a vehicle by placing more steel guard rails next to Lake Shore Drive.

“The bike paths are closer to Lake Shore Drive than the pedestrian paths are,” Greenfield said. “If a driver loses control, they can easily strike cyclists on the path.”

As part of its Lakefront Trail Separation Project, the Chicago Park District is placing guard rails where the bike paths are too close to Lake Shore Drive, which will help prevent both intentional and accidental collisions.

Sriraj said a premeditated attack like what happened in New York City most likely cannot be prevented, but Chicago can do more to prevent accidental incidents by placing warning signs to alert both motorists and cyclists of an upcoming intersection.

“You can only try to educate the public about the use of shared spaces and making sure the motorists are aware of the bicyclists,” he said.

Jim Merrell, advocacy director for Active Transportation Alliance, said his organization prioritizes facilities that make it impossible or difficult for cars to enter a bike lane and encourages people to use alternative modes of transit to eliminate the threat of crashes.

“People should feel safe biking and walking in the street,” Merrell said. “We would hope that folks wouldn’t be [too] discouraged by what happened in New York City to get out and enjoy the great existing network of trails and bikeways that the city of Chicago has.”