A comedian, a politician, a millennial walk into a bar 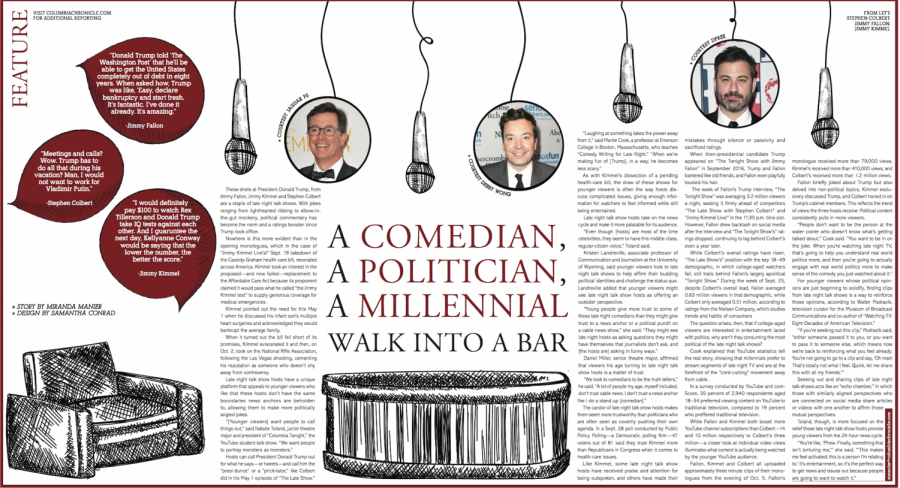 A comedian, a politician, a millennial walk into a bar

These shots at President Donald Trump from Jimmy Fallon, Jimmy Kimmel and Stephen Colbert are a staple of late night talk shows. With jokes ranging from lighthearted ribbing to elbow-in-the-gut mockery, political commentary has become the norm and a ratings booster since Trump took office.

Nowhere is this more evident than in the opening monologues, which in the case of “Jimmy Kimmel Live’s!” Sept. 19 takedown of the Cassidy-Graham health-care bill, resonated across America. Kimmel took an interest in the proposed—and now failed—replacement to the Affordable Care Act because its proponent claimed it would pass what he called “the Jimmy Kimmel test” to supply generous coverage for medical emergencies.

Kimmel pointed out the need for this May 1 when he discussed his infant son’s multiple heart surgeries and acknowledged they would bankrupt the average family.

When it turned out the bill fell short of its promises, Kimmel eviscerated it and then, on Oct. 2, took on the National Rifle Association, following the Las Vegas shooting, cementing his reputation as someone who doesn’t shy away from controversy.

Late night talk show hosts have a unique platform that appeals to younger viewers who like that these hosts don’t have the same boundaries news anchors are beholden to, allowing them to make more politically angled jokes.

Hosts can call President Donald Trump out for what he says—or tweets—and call him the “presi-dunce” or a “prick-tator,” like Colbert did in his May 1 episode of “The Late Show.”

“Laughing at something takes the power away from it,” said Martie Cook, a professor at Emerson College in Boston, Massachusetts, who teaches “Comedy Writing for Late Night.” “When we’re making fun of [Trump], in a way, he becomes less scary.”

As with Kimmel’s dissection of a pending health-care bill, the draw of these shows for younger viewers is often the way hosts discuss complicated issues, giving enough information for watchers to feel informed while still being entertained.

Late night talk show hosts take on the news cycle and make it more palatable for its audience.

“Even though [hosts] are most of the time celebrities, they seem to have this middle-class, regular-citizen voice,” Toland said.

“Young people give more trust to some of these late night comedians than they might give trust to a news anchor or a political pundit on a cable news show,” she said. “They might see late night hosts as asking questions they might have themselves that journalists don’t ask, and [the hosts are] asking in funny ways.”

“We look to comedians to be the truth tellers,” he said. “A lot of people my age, myself included, don’t trust cable news. I don’t trust a news anchor like I do a stand-up [comedian].”

The candor of late night talk show hosts makes them seem more trustworthy than politicians who are often seen as covertly pushing their own agenda. In a Sept. 28 poll conducted by Public Policy Polling—a Democratic polling firm­—47 voters out of 81 said they trust Kimmel more than Republicans in Congress when it comes to health-care issues.

Like Kimmel, some late night talk show hosts have received praise and attention for being outspoken, and others have made their mistakes through silence or passivity and sacrificed ratings.

When then-presidential candidate Trump appeared on “The Tonight Show with Jimmy Fallon” in September 2016, Trump and Fallon bantered like old friends, and Fallon even playfully tousled his hair.

The week of Fallon’s Trump interview, “The Tonight Show” was averaging 3.2 million viewers a night, seating it firmly ahead of competitors “The Late Show with Stephen Colbert” and “Jimmy Kimmel Live!” in the 11:35 p.m. time slot. However, Fallon drew backlash on social media after the interview and “The Tonight Show’s” ratings dropped, continuing to lag behind Colbert’s even a year later.

While Colbert’s overall ratings have risen, “The Late Show’s” position with the key 18–49 demographic, in which college-aged watchers fall, still trails behind Fallon’s largely apolitical “Tonight Show.” During the week of Sept. 25, despite Colbert’s overall lead, Fallon averaged 0.63 million viewers in that demographic, while Colbert only averaged 0.51 million, according to ratings from the Nielsen Company, which studies trends and habits of consumers

The question arises, then, that if college-aged viewers are interested in entertainment laced with politics, why aren’t they consuming the most political of the late night talk shows?

Cook explained that YouTube statistics tell the real story, showing that millennials prefer to stream segments of late night TV and are at the forefront of the “cord-cutting” movement away from cable.

While Fallon and Kimmel both boast more YouTube channel subscriptions than Colbert—14 and 10 million respectively to Colbert’s three million—a closer look at individual video views illuminates what content is actually being watched by the younger YouTube audience.

“People don’t want to be the person at the water cooler who doesn’t know what’s getting talked about,” Cook said. “You want to be in on the joke. When you’re watching late night TV, that’s going to help you understand real world politics more, and then you’re going to actually engage with real world politics more to make sense of the comedy you just watched about it.”

For younger viewers whose political opinions are just beginning to solidify, finding clips from late night talk shows is a way to reinforce those opinions, according to Walter Podrazik, television curator for the Museum of Broadcast Communications and co-author of “Watching TV: Eight Decades of American Television.”

“If you’re seeking out this clip,” Podrazik said, “either someone passed it to you, or you want to pass it to someone else, which means now we’re back to reinforcing what you feel already. You’re not going to go to a clip and say, ‘Oh man! That’s totally not what I feel. Quick, let me share this with all my friends.’”

Seeking out and sharing clips of late night talk shows acts like an “echo chamber,” in which those with similarly aligned perspectives who are connected on social media share articles or videos with one another to affirm those mutual perspectives.

Toland, though, is more focused on the relief these late night talk show hosts provide young viewers from the 24-hour news cycle.

“You’re like, ‘Phew. Finally, something that isn’t torturing me,’” she said. “‘This makes me feel activated; this is a person I’m relating to.’ It’s entertainment, so it’s the perfect way to get news and issues out because people are going to want to watch it.”