Mendoza: The governor suffers from ‘Rauneritis’ 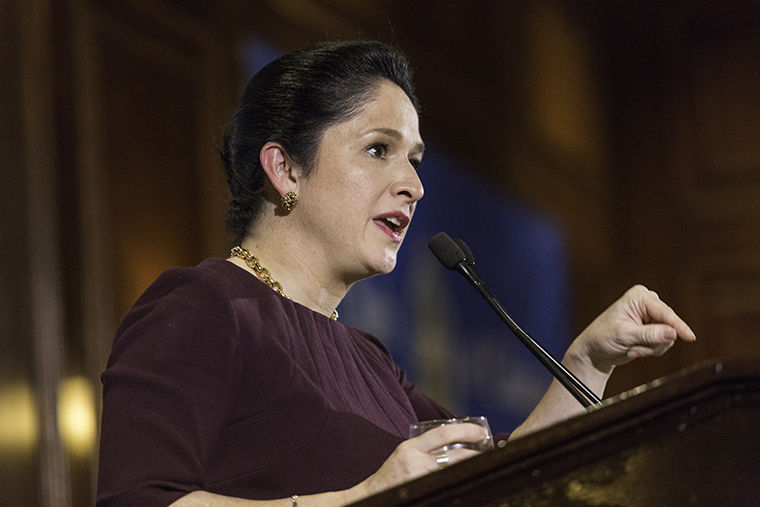 Despite stating that her intention is not to criticize the governor, the former Chicago city clerk, spent her speech at the City Club of Chicago March 20 discussing Rauner, specifically how she recently discovered Rauner’s office has used the Healthcare Provider Relief Fund to pay $112 million in consulting and management fees and contracts for computer software since he took office in January 2015.

“The days of the comptroller office handing blank checks for governor’s pet projects are over,” she said. “I will be the check and balance that the [Illinois] Constitution intended this office to be.”

The comptroller office is the most important government office, especially because of the state’s current budget stalemate, but most people have never heard of it, according to Mendoza.

“Illinois is in the mitts of the worst fiscal crisis in its history,” Mendoza said. “Just last week, we hit a milestone. The state now owes an unprecedented $12.8 billion [in backlog bills].”

For context, she said Illinois has a population of 12.8 million people, which equals to $1,000 in unpaid bills per person.

Mendoza, who is also a former state representative from Illinois’ 1st District, also criticized her predecessor Leslie Munger, who was recently appointed deputy governor by Rauner.

Referring to a March 9 Associated Press story, Mendoza said Rauner is proposing to pay Munger’s $138,000 salary with employee health insurance premiums. Rauner is forcing citizens in need of medical care to wait longer by diverting money to establish a “patronage hire,” she added.

“Now more than ever, the people in the state of Illinois deserve a comptroller who leads with a strong moral compass,” Mendoza said.

Mendoza said that a month before the November 2016 election, Munger paid out more than $4 million in bonuses while social service agencies were suffering under the governor’s direction. On Munger’s first day in office, she moved those bonuses and elected official’s paychecks to the “back of the line,” she added.

“We are being asked to make life and death decisions on a daily basis,” Mendoza said. “My office has a very clear agenda, we’re putting the neediest in Illinois first by prioritizing nursing homes, hospice care, ambulatory care and medical care.”

Contrary to Rauner’s accusations that Mendoza is collaborating with House Speaker Michael Madigan and Attorney General Lisa Madigan to create a government shutdown, she said the governor is the one attempting to force a shutdown. She insisted she is independent of the Illinois Democratic Party leaders but there is one person who can give her orders.

“There’s only one person in the world who tells me what to do, and that’s my mother,” said Mendoza, echoing her statement at the Capitol during International Women’s Day March 8.

The Illinois Department of Central Management Services submitted payroll to the comptroller’s office March 2 asking to pay 578 employees from the General Revenue Fund. However, the comptroller’s office returned the submission and requested they re-submit the payroll through the Facilities Management Revolving Fund and the State Garage Revolving Fund, according to a March 3 press release from Rauner’s office.

“Mendoza’s decision to stop paying employees out of the General Revenue Fund directly impacts the state’s ability to pay for human services,” Munger said the in the press release.

The comptroller’s office was able to win in court, and Judge Robert LeChien ruled in her favor to pay the state’s bills from the appropriate funds, according to a March 7 press release from Mendoza’s office. However, Rauner appealed the decision.

“We are appealing because we are going to continue fighting Mendoza’s push to cripple state government operations,” Eleni Demertzis, a Rauner spokeswoman said in a March 8 statement. “[This is] part of the coordinated effort to shut down state government.”

However, Mendoza again maintained she is independent and said Rauner is wasting taxpayer money of “frivolous lawsuits.”

Speaking with reporters, Mendoza said Rauner is unable to take responsibility for his failures and instead has redirected the blame to his political rivals, suggesting he suffers from “Rauneritis.”

Following an announcement from her office March 7 that the state deficit reached $126.7 billion, made public in a review of Illinois’ 2016 fiscal year finances,  it has now passed $130 billion, Mendoza said.

“It’s not just a number on a spreadsheet,” she said. “There are people behind these numbers. Our state is coming apart at the seams.”