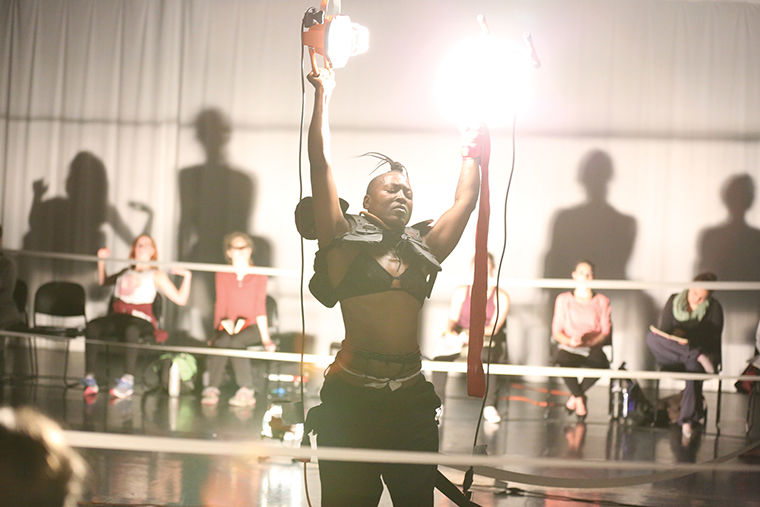 Fog lights were the only lighting choreographer Nora Chipaumire used in her performance. The lights resulted in dramatic shadows in the performance space on Oct 20.

Preconceived notions of the African, black male body and how it has been affected by societal norms and colonialism were challenged through dance in the performance of “portrait of myself as my father.”

The piece, which premiered Sept. 14 at the Brooklyn Academy of Music, will continue touring  Nov. 17–20, according the MAPP International Productions             website schedule.

Expressing a theme of athleticism, the stage was made to appear as though it was a boxing ring, and Chipaumire wore football pads and sweatpants. This performance examined the stereotype of men as lacking intellectual capacity and concerned with strength, according to Chipaumire.

In the show, Chipaumire’s father was portrayed as a champion athlete, also symbolic of masculinity.

Separated at the age of five, Chipaumire said she never had the opportunity to fully know her father. When conducting research for this work,  she took an interest in her father’s life and the struggles he may have faced in colonial Africa, she added.

“I didn’t want to create some kind of monstrous, absent  man, which is how the black male is generally portrayed in the world,” Chipaumire said. “I wanted to create somebody who had complexity and probably lives up to many of the stereotypes of the black man but still is dealt with as a complex human being.”

Chipaumire, born and raised in Harare, Zimbabwe, is a three-time winner of the New York Dance and Performance award “The Bessie,” according to the NYDP website archives. She created “portrait of myself as my father,” she said, as a companion to her previous work “rite riot,” which was a solo performance that explored aspects of female identity in the same way this piece explores the identity of men.

Bonnie Brooks, an associate professor in the Dance Department and Dance Center curator, arranged for Chipaumire to come to Columbia to show the work. She had seen Nora’s previous work in the past.

“I felt like her voice would be a really good fit for our season this year,” Brooks said.

After the Oct. 20 performance, most of the audience stayed for a post-performance discussion with Chipaumire, N’diaye and Watt, which was moderated by Raquel Monroe, an associate professor in the  Dance Department. On Oct. 21, there was a pre-performance discussion with the performers, Monroe and Thomas DeFrantz, professor in the Department of African and African American Studies at Duke University.

“[With the piece, I want to] create a discussion—just add to the whole philosophical discourse here,” Chipaumire said. “It’s beyond awareness; it is really creating discussions that matter, dialogue, conversations that matter about what is contemporary art and what is a human being.”