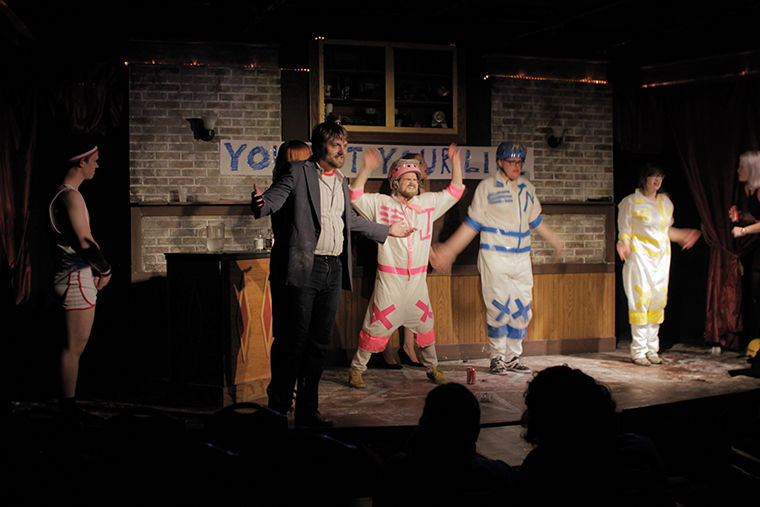 The ensemble members of HIJINKS performing "The Book of HIJINKS" during the Jangleheart Circus comedy festival at The Den Theatre, 1333 N. Milwaukee Ave. The group celebrated its new home at the iO on Feb. 7.

Sketch comedy is always a welcoming platform for new, high-concept ideas. The weirder the idea, the better.

This is good news for HIJINKS, the five-piece sketch comedy group that brought its show “HIJINKSfest” to its new home at the iO Theater, 1501 N. Kingsbury St., on Feb. 7. The group is composed of members Clayton Margeson, Jude Tedmori, Mike Klasek, Alex Hanpeter and Kyle Reinhard. Over the last year, the group has made a name for itself in Chicago, thanks in part to its experimental 12-show run at the Public House Theatre, 3914 N. Clark St.. Before joining together, the ensemble was originally split into two separate sketch groups known as Sovereign and Two Bunnies Eating Flowers.

“We are all improvisers and sketch writers by trade, and I was in a group with Mike Klasek,” Margeson said. “He approached me about that because he said, ‘I want to do sketches like nobody else, and you seem like a maniac who will do anything.’”

During the groups’ residences at the Public House, the members came up with the idea to become one big supergroup.

“We were still doing shows separately, but we were all on similar wavelengths, and [we] got along really well,” Margeson said. “I think it was Chris Geiger at Public House Theatre who said, ‘You should all do a split bill show where Two Bunnies opens for Sovereign one week and Sovereign opens for Bunnies the next week.’ We were like, ‘That’s not super interesting because that’s what other groups would do.’ So instead we were like, ‘Let’s just make one supergroup.’”

The comedy performances tend to be physically taxing on the HIJINKS perormers. The seemingly endless, high-energy performances of the experimental sketches often take a toll on the performers.

“None of the shows are easy, so we’re all kind of worried because there’s going to be a lot of screaming, physical movement and [mock] violence and stunts,” Klasek said.

Tedmori said the spirit of the shows, albeit a bit chaotic at times, helps keep the audience involved with every performance.

“Luckily, [all of the shows] are high-energy,” Tedmori said. “We crafted the running order of the shows to not be chronological, but to keep the audience’s attention and keep it varied so there’s not back-to-back stuff.”

Making it to the iO is a dream for the members of HIJINKS. iO’s history, and its new Lincoln Park location, made the decision to perform at the theater an easy one.

“It is going to be awesome,” Tedmori said. “We’re super excited because the new theater’s so nice, and they’ve been nothing but accommodating. Just the fact that they’re letting us do this show—which is an uncharted thing nobody’s done before—is awesome.”

Margeson said working with the theater has been an exciting experience because iO is open to an array of ideas, no matter how eccentric and experimental they may be.

“We’re so used to being told no, so we were thrown when we were told yes,” Margeson said. “Normally we push it so far that people are like, ‘No, you can’t do that. You can’t light anyone on fire or get completely naked.’ With this it’s just been ‘Yes, yes, yes.’”

The members of HIJINKS said they are excited to try new things on the iO stage.

“We’ve gotten into trouble with the marketing, but they’ve been on our side and totally supportive,” Klasek said. “It’s a dream come true.”