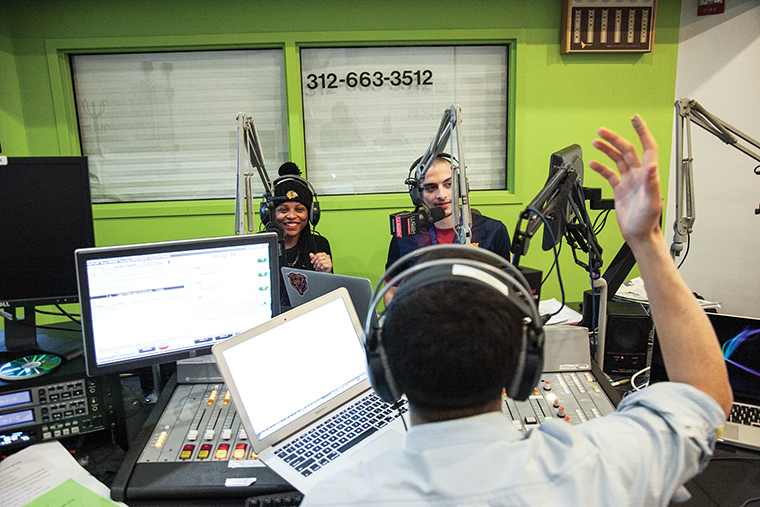 West Side rapper Bella Bahhs (left) sits in on the “The Benchwarmers,” hosted by Chronicle Media Relations Editor Nader Ihmoud (front) and Eduardo Saldana (rear). The Monday night radio show is broadcast on Columbia’s WCRX 88.1. Host Ihmoud praised Bahh’s song “Good Loud” and pleaded with her to release a clean version that he could play on air.

You may not know it by looking at her, but petite, soft-spoken Ambrelle Gambrelle, a West Side rapper who performs under the moniker Bella Bahhs, is tough.

Bahhs, a spoken word artist, made her rap debut with the EP Power Hall, which she self-released Sept. 3 on her website YeahBellaRaps.com. Bahhs’ music quietly expresses a keen awareness of the struggle and violence tormenting Chicago’s impoverished neighborhoods.

A Chicago native and 2010 graduate of Lane Technical High School, Bahhs is a senior at Dominican University in River Forest, Ill. As a child, Bahhs won her 2nd grade poetry contest and has focused intensely on improving her word craft ever since. While notable poets like Edgar Allen Poe, E.E. Cummings and Maya Angelou laid the creative groundwork, Bahhs said her inspiration comes from the many spoken wordartists she has seen at Chicago open mics.

Lyrically influenced by her neighborhood and family, Bahhs confidently raps in her track “Good Loud”: “I just want to make my hood proud/ Lift it up like good loud/ Moving on up like George now/ Washingtons, just throw em’ down,” with a nod of respect to her upbringing.

The Chronicle caught up with Bahhs in the WCRX studio to discuss her music and the state of  hip-hop.

THE CHRONICLE: In your music, you’re tough, but you seem more soft-spoken in person. Do you change your persona when you perform?

BELLA BAHHS: Yeah, until you piss me off. In music of course I have to make myself, make my voice sound like it goes with the beat, so I have to do some vocal training … I usually sit in the bathroom for hours and look at myself and watch myself talk.

CC: When did you realize you wanted to be a rapper?

BB: It wasn’t [just] one day. Music—being a rapper—it’s a dream. So many people are after this dream that for a long time I was just telling myself, OK, it’s just something fun to me. I’m just having fun with it, but I want it to be more than just fun—I want this to be business; I want it to be what I do.

CC: What is your music ultimately trying to say?

BB: Take back your power. In a multitude of ways we have our power stripped from us through systems of injustice, unfair advantage and disadvantage.

CC: What influences that?

BB: It’s anger; it’s hurt that comes from seeing this in my community, particularly in my family, and it seems like everyone wants some type of power but don’t know how to  get it.

CC: In a lot of ways, hip-hop is a man’s world. How have you dealt with that?

It’s a really sexist industry to be in. It’s really hard to be taken seriously, and it’s really frustrating when you have this vision of yourself and a bunch of people around you just see you as a woman. To be considered half as good, I have to do twice as much work.

CC: Which song off Power Hall is your most personal?

BB: “The Dedication.” It’s dedicated to my paternal grandmother and my cousin. We weren’t blood-related, but we grew up on the same block. We grew up together. We were raised together. My grandmother died of cancer and my cousin was shot and killed. I didn’t go into it thinking I was going to write a song that emotional, or that personal, but it was this beat that one of my Robot Army members made and sent to me, [and] I just couldn’t shake that [that] was what I needed to talk about on it.

If you’ve ever lost someone, if you miss someone, you’ll relate to it.

CC: Do you feel like hip-hop is getting too degrading?

BB: It’s unfortunate that that’s the story some people have to tell, [the ones] that do degrade women or aren’t positive messages, or messages kids shouldn’t be listening to at all. But we have to remember they’re telling a story. I think the bigger issue there is we need to be teaching young men, and young women too, who degrade themselves as they are growing up, that that’s not OK.

CC: Does your music speak to that?