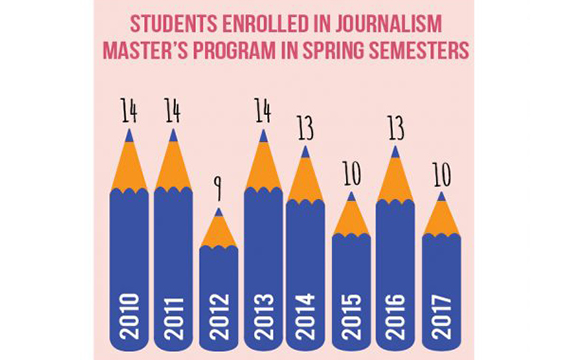 Columbia has decided to suspend admissions to the journalism master’s degree in order to re-work, improve and revise the program after its continuous enrollment decline.

Suzanne McBride, chair of the Communication Department, said the program only received 10 applications for the 2018–2019 academic year by the Jan. 15 deadline, which was the lowest she had seen since she began working at the college 13 years ago. According to McBride, eight students started in the beginning of the Spring 2018 Semester, two left the program and another joined, leaving seven in the program, as of press time.

“We were worried about how many students we would have come fall, what kind of experience that would be for those students , so at that point, we made the recommendation to the dean, both here at the School of Media Arts and to the graduate dean,” McBride said. “That went up to the Provost’s Office and they all agreed and understood why we were making the recommendation.”

While the program’s admission are being suspended for an undetermined time, McBride said the decision will not affect current students in the program.

“What we’re really hoping to spend the next several months doing is looking at the program and thinking about what is the best possible way we could offer journalism in this ever-changing environment,” McBride said. “The journalism environment has been changing for a couple of years now and it’s been a very good program.”

Curtis Lawrence, director of the journalism graduate program and associate professor in the Communication Department, said the department has been hearing back from program alumni during the past few of days with suggestions and feedback to improve.

“We have heard from many students, many of them [are] sad that the program has been suspending admissions and we have to remind them that we were just suspending admissions to stop and look at the program,” Lawrence said. “[They] were very glad to hear that and many of them offered to help take part in the discussion about how we might reframe and continue to offer graduate education.”

Lawrence said when the news was communicated by email sometime in January, he had already met with all the current students in the program to inform them of the decision to suspend and that the classes would still be available for them to fulfill graduation requirements for December 2018.

“Sometimes people forget that teaching, if done right, takes a lot out of you,” Lawrence said. “It would have been difficult to continue to try to maintain the program and then stop and look at it and evaluate it all at the very same time.”

Michael Sandler, a 2012 alumnus from the journalism masters program, said he received an email last week that was co-signed from McBride and Lawrence about the decision. Sandler said he had a positive experience in the program and he was sad to hear the news.

McBride said the department will work hard to determine methods to revamp the program. This may include new ways  to market the program to better attract students and add other skills, such as more social media use in the classrooms.

“We’re not jumping up and down and saying, ‘Yay, we’re really excited to do this,’ but we would not be true to what the rich legacy of the program is [and] to its future students if we didn’t pause at this moment and say what do we need to do,” McBride said.

Clarification 2/26/18 at 6 p.m.: It was reported that Curtis Lawrence, director of the journalism graduate program and associate professor in the Communication Department, met with students from the journalism master’s program when the email was sent out announcing the suspension of admissions into the program. Lawrence met with the students prior to the email announcement being sent out, and The Chronicle wants to clarify the order of events.

Correction 2/26/18 at 6 p.m.: The enrollment in the journalism master’s program was stated to be 20 students in the Fall 2016 Semester and fell to 10 students in the Spring 2017 Semester. While the enrollment numbers are accurate, the comparison was misguided. Because the program is three semesters long and students graduate at the end of the fall semester, less students are around in spring. The Chronicle regrets this error.

Correction 2/27/18 at 12 p.m.: It was stated that three students left the journalism master’s program since the beginning of the Spring 2018 Semester, dropping enrollment from 10 students to seven. However, there were eight students enrolled at the beginning of the semester, two left and an additional student joined, leaving seven in the program. The Chronicle regrets this error.