Appreciation of neon signs marks end of an era 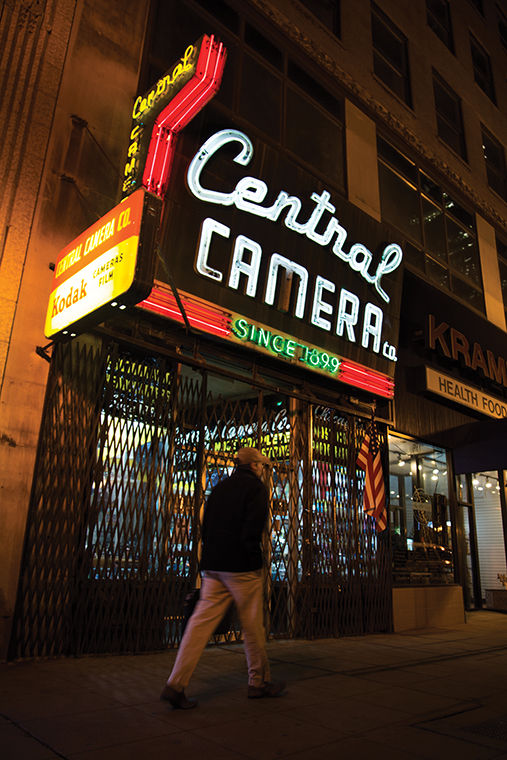 Central Camera Co.’s sign at 230 S. Wabash Ave. is one of the few neon signs left in Chicago. Such signs once illuminated nearly every storefront.

Preservation Chicago, an organization advocating for the preservation of Chicago-based historic architecture, neighborhoods and urban spaces, released its annual top seven Most Endangered Buildings list March 4. The list includes neon signs. While not buildings, they are definitely endangered.

The organization’s “Chicago 7” list said neon signs used to be on every commercial street throughout the city. Now, the signs are scattered across town and are a rare sight to see, according to the list.

“If you look around, there’s a few people who will create a new neon sign for their business, because it’s cheaper and more economical to just put a sign against their building,” Hayes said. “[Neon signs are] kind of a lost art.”

Ward Miller, executive director of Preservation Chicago, said he remembered when neon signs were a distinct feature of Chicago. He said the buildings on Randolph Street downtown would glow at night from the radiant signs.

“Neon signs were once an iconic part of Chicago’s landscape,” Miller said. “Our hope is that listing neon signs as an endangered architectural ornament will raise people’s awareness of their importance.”

Nick Freeman, author of “Good Old Neon: Signs You’re in Chicago,” which is about the city’s neon signs, has elevated photographing the signs to an art form.

“Neon signs were a key marketing and advertising tool,” Freeman said. “They had a visceral effect on people.”

Freeman said customers would associate amusement parks, hotels and restaurants with the glowing signs displayed outside of them. Neon signs were cheap and affordable during their popularity in the ‘40s and ‘50s, but Freeman said they are now more expensive to produce. Like print photography, he said neon sign manufacturing and maintenance is expensive because few companies still do it. In Chicago, there used to be 200 manufacturers and now there are only a few, Freeman said.

Hayes said repairing the glass tubing on a neon sign is as cheap as replacing a car headlight, but businesses need to have sign permits and insurance for their signs, which drive up the cost of operating them.  He said neon signs are fragile and can easily get damaged from the harsh winter climate. Businesses also choose to get rid of their neon signs for other reasons, he said.

Miller said he hopes Preservation Chicago can encourage businesses to preserve their signs because of their historical significance. He said neon signs have as much architectural merit as the buildings they represent.

Hayes started collecting neon signs for the Ravenswood event space seven years ago when the center was first opened. Neon signs create a colorful and lively backdrop for the weddings and parties held at the center, he said.

Hayes’ collection consists of 35 different car- and Chicago-themed signs including one of the neon signs that used to be displayed outside of a parking garage owned by the City of Chicago.