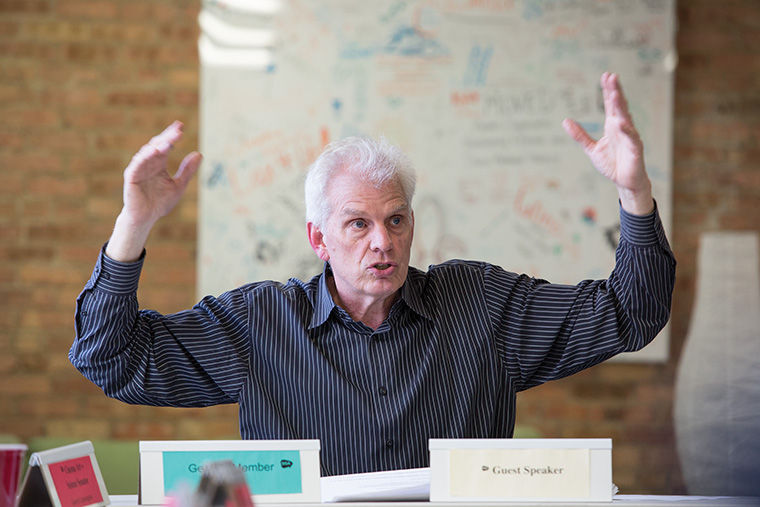 Mark Kelly, vice president of Student Success, visited the Student Government Association’s April 14 meeting to express his concerns that members of the SaveColumbia coalition are misinformed about the objectives laid out in the Strategic Plan.

Administrators are beginning to question students’ understanding of the Strategic Plan and its proposed actions as the #SaveColumbia movement gains momentum.

Mark Kelly, vice president of Student Success, met with student senators during an April 14 Student Government Association meeting,  to discuss backlash from the college community regarding the Strategic Plan. Kelly said he and other administrators are concerned that students and members of the #SaveColumbia movement are misinformed about the actions outlined in the plan.

“What distinguishes a college community from almost all other communities is it’s a place where voices can be heard and people can speak their mind, so people are speaking their mind right now, and that’s good and legitimate,” Kelly said. “[But] from my view, I think there’s a lot of misinformation that I’d like to bring to your attention.”

When asked by SGA President Sara Kalinoski during the meeting whether they had read the Strategic Plan, only a handful of SGA senators said they had while others asked where it could be accessed. Kalinoski said she fears this number is reflective of the majority of the students at the college, especially those who have spoken out against the plan.

“It’s a 40-page document, so I understand how daunting that can be,” she said. “But [students] should at least read the highlights of it so they actually know what the plan says. It’s available for everyone to read, so it’s important that they actually see it for themselves.”

Kalinoski, who is also the student representative on the Strategic Planning Steering Committee, said she had a direct role in developing the Student Success portion of the proposal. The proposal was created based on student feedback gathered through SGA-sponsored roundtable discussions and on the Civic Commons website, she said.

“Especially last semester when we were trying to figure out what the plan was going to be about, there were quite a few students [commenting],” she said. “Even at our roundtables they weren’t dominated by faculty.”

Tarin Butterfield, a freshman photography major and administrator of the #SaveColumbia Facebook group said that she thinks students were not aware of the process.

“A lot of us feel we weren’t notified [sufficiently] of the [Civic Commons] forum and that we were allowed to comment.”

Kalinoski said the administration encourages student feedback throughout the final stages of the Strategic Planning process and that it includes information about representing the student voice.

“For the students that might feel their voices weren’t represented, it could be because they weren’t aware this whole process was going on,” said Jerel Ballard, SGA vice president of Finance. “Students have to make sure that they’re reading their emails and watching the posts [on social media] so that they are aware.”

Butterfield said that in any case, students in the movement have now read the plan and are informed in their position.

“When this was first started, we said ‘educate yourself,’” she said. “Students want to be able to back up their claims with viable information, so that they know what they’re talking about.”

SGA encouraged students to take part in early strategic planning discussions last semester by promoting them through social media, flyers and word of mouth, Kalinoski said. It also put in an official complaint to administrators in response to student concerns about the elimination of the college’s First-Year Seminar program.

Kelly said many of the common complaints, including tuition increases and the creation of new vice presidential positions at the college, come as a result of students’ misunderstanding.

In response to concern about the alleged creation of seven new vice presidential positions, Kelly said that when President and CEO Kwang-Wu Kim arrived at the college, Columbia already had seven vice presidents. That number is presently down to six but will return to seven after the hiring of a new Vice President of Strategic Marketing and Communications, he said.

“Do they have different titles?” Kelly said. “Are there switches here and there? Yes. But there is no crazy, bloated administration. It is the same administration, and I will tell you as an administrator that we’re being held to a higher standard.”

Kelly said the #SaveColumbia demand for a tuition freeze would be counterproductive, as the increase in tuition will be used to provide more scholarship money for students. This year, about 50 percent of Columbia students are on scholarship, while next year, he hopes to increase this number to 60 percent, he said.

“The college could have frozen tuition this year,” Kelly said. “But that would have meant no additional scholarships because we have no ability to fund them.”

An April 14 all-campus email from Senior Vice President and Provost Stan Wearden expressed a similar concern regarding student miscommunication, addressing some of the apprehensions communicated by the SaveColumbia campaign.

In the email, Wearden explained the decision to increase class sizes at the college from an average size of 17 students to 18. The school would still keep 77 percent of its registration caps at fewer than 20 students, ranking Columbia higher than area competitors such as Roosevelt, DePaul and Loyola universities, he said. Additionally, the small increase could save the college up to $1.6 million annually in student tuition funds.

At the SGA meeting, Kelly and the student senators discussed how they could work effectively to open lines of communication between students, faculty and the administration throughout the rest of the strategic planning process and into the future.

Ballard said now that the SGA has a better grasp of the Strategic Plan, senators will be able to effectively discuss and spread accurate information about the plan to the students they represent.

SGA will also be hosting the Pizza With the President event on April 28, where students are encouraged to meet with Kim to ask any questions they may have regarding recent administrative decisions, the Strategic Plan and other topics relating to the college community.

Kelly said students should understand that all of the actions included in the Strategic Plan are in the best interest of the college’s future but added that communication on the part of the administration could have been better throughout the process.