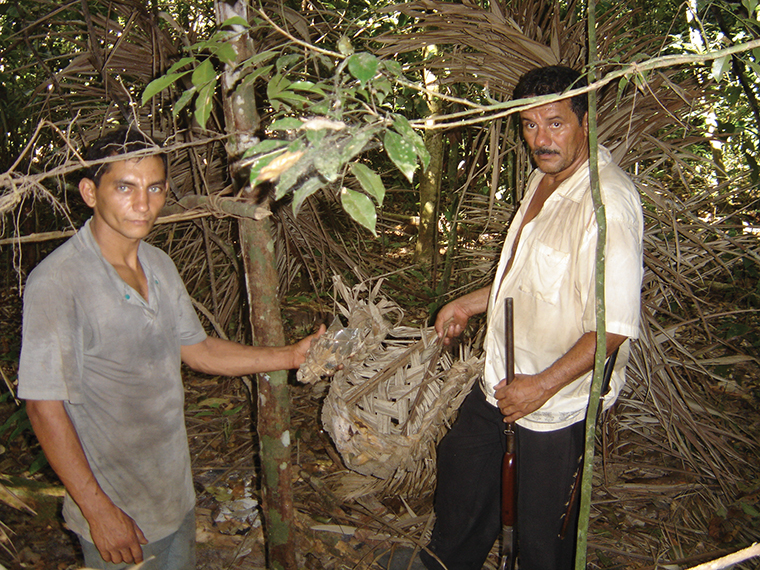 Members of the Guajá tribe in the eastern Amazon isolate themselves from the industrialized world but wear modern clothing, showing that modern society has already encroached on their way of life.

A new study from the University of Missouri suggests the best way to safely monitor geographically isolated or “uncontacted” indigenous tribes—about 100 of which are estimated to exist in the Amazon Basin alone—is through the use of remote satellite surveillance.

The research, published April 21 on the website of the American Journal of Human Biology, included rough calculations of the population sizes of uncontacted tribes based on analysis of Google Earth satellite images. The images show the amount of land set aside for agriculture and the residential areas occupied by the groups.

“Previously it’s been really hard to even get an estimate of how many people there are in these [indigenous] groups,” said Robert Walker, co-author of the paper and assistant professor of anthropology at the University of Missouri.

According to Walker, most prior methods of observation of indigenous groups, such as flyovers, in which low-flying planes take photographs to gather information, were intrusive. Those methods pose many ethical and logistical problems and can disturb groups that wish to be left alone. According to Marcus Hamilton, co-author of the paper and postdoctoral fellow at the Santa Fe Institute,

European colonization led to first contact with the indigenous groups in the Amazon Basin. The Brazilian government has implemented a strict no-contact policy except in extreme emergencies because of early instances of unwanted contact between outsiders and indigenous people, he said.

Hamilton said it is very common for missionaries, settlers and illegal miners to trespass on these protected territories, a problem that he said often results in violence.

“When contact is forced onto indigenous peoples, huge percentages of the population usually die from diseases like the measles, tuberculosis, the common cold or the flu,” said Kayla Wieche, communications officer for Survival International, an organization that advocates for the rights of tribal groups around the world.

According to Wieche, many modern diseases are life-threatening for indigenous groups that are not immune to them and do not have access to vaccinations.

The type of remote satellite surveillance described in this new study could be used to prove that indigenous groups inhabit regions that big businesses claim are uninhabited as they attempt to profit from the areas’ natural resources, Wieche said.

“The most proven successful way for uncontacted groups to live safely is for governments to demarcate areas for them, to give them [their]space and protected territories,” Wieche said.

Wieche added that the most discreet, respectful measures should be taken to preserve the rights and wishes of these tribes while also gathering enough information to offer them legal protection.

Walker said there is a paradox in trying to simultaneously study and protect uncontacted groups. Scientists and anthropologists want to study indigenous peoples and their cultures while also preserving their right to remain isolated, he said.

“In terms of the greater good for humanity, you have to think about their survival first and the scientific value second,” Walker said.

Hamilton said the next step for the authors is to implement the research techniques they outlined to systematically survey areas of the Amazon Basin and identify indigenous village locations. Using satellite imagery could allow researchers to examine the fluctuation of population sizes and identify causes and solutions.

“This research goes beyond academic exercise,” Hamilton said. “These are some of the last indigenous cultures on the planet.”