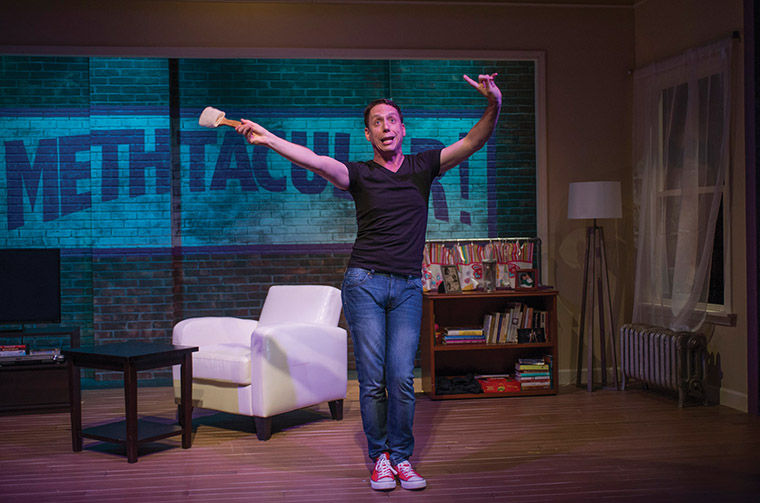 “Methtacular,” a show that explores the life of a gay man addicted to crystal meth, is gearing up for its final two weeks at Theater Wit, 1229 W. Belmont Ave., in Boystown.

The one-man show follows the life of Steven Strafford, a gay man raised in New Jersey who later moved to Chicago and was sucked into the seedy underworld of methamphetamine use, bathhouses and phone sex lines of the city’s gay community.

When Strafford arrived in Chicago in January 2000 after graduating college, he was introduced to the drug while using local phone sex lines that allowed men to respond to each other’s messages and meet up.

“The funny thing is that it was not from going out to clubs—I never really did that—I was actually scared of that,” Strafford said. “I was using these phone sex lines and I met up with this guy and he was like, ‘Try this drug,’ and that was it.”

Within seconds of Strafford snorting the powerful stimulant for the first time, he began to feel more confident about himself, something he said he never felt until that moment.

“The first time I did the drug was the first time that I felt there was nothing wrong with me,” Strafford said. “When I did crystal [meth] for the first time, I felt strong, sexy and  confident. I felt better than I had ever felt before, so that was something I was going to chase down.”

James Belanger, a clinical counselor at the Haymarket Center in Chicago, said even though people of all orientations use methamphetamines, it is extremely common in LGBTQ communities.

“Over the last few years, there has been a reduction of meth use across the country,” Belanger said. “However, that is not true for the LGBTQ community. The use has not gone down at all, it’s just gone underground.”

Strafford said feelings that arose during his first use were the result of his insecurities as a young gay man in American society.

“When I was growing up, occasionally there were gay characters in things,” Strafford said. “Usually they died [and] that was pretty standard. It was a matter of not having a lot of positive role models of gay people in my suburban upbringing, so I think I was carrying around a lot of just feeling ‘less than.’”

Belanger echoed Strafford’s experiences of growing up in a traditional American suburb with a lack of positive role models, stating that many people in the LGBTQ community start using the drug to cope or feel better about themselves.

“The desire to use meth is driven by certain factors that are very prevalent in the LGBTQ community,“ Belanger said. “Weight control, body image, self-esteem and sexual identity issues, wanting to belong to a family of choice of their peers, so they might experiment in ways that they would not normally experiment in.”

After three years of constant methamphetamine use, unemployment and unprotected sex, Strafford said he returned home to New Jersey in an attempt to get clean, a goal that would take time but eventually succeeded as a result of therapy, 12-step meetings, supportive friends and pursuing his dream of performing on stage.

“I was not pursuing acting,” Strafford said. “Occasionally I fell into a job—I did a six-month tour of Europe doing ‘Grease, the Musical’ because I was singing karaoke in a gay bar in Queens.” He recalls a friend calling him out fror his laziness, saying: ‘You’re a waiter, you can’t tell people that you’re an actor because you don’t audition.’”

Strafford began to write what would become, “Methtacular” after auditioning for a role in “Animal Crackers,” a play by the Marx Brothers, a few years after he left Chicago to get sober.

“I auditioned for a play in Chicago… and I was really sort of worried because I was going back to Chicago and I was newly sober,” Strafford said. “They cast a woman in the role and I lost it … I was just really sad and angry, and I ended up opening my computer and wrote the word f–k over and over and over again.”

Strafford continued to write the obscenity until he wrote the line that sparked the inspiration for his show.

“I wrote, ‘Imagine in one sniff, every physical, emotional and sexual insecurity you ever had disappears,’” Strafford said. “Then I just proceeded to write for the next eight hours that day. I had snacks and coffee and that was it—I just kept writing.”

In the early stages of the play, Strafford wrote more of a prose style piece and said he saw them more as esaays and had not even thought to turn it into a show for the stage.

At this point, Strafford recruited his ex-boyfriend and theater director, Adam Fitzgerald, to help him refine what he had written and transform it into a piece for the stage.

“I brought Adam on board and from that moment on, Adam and I were working on it together,” Strafford said. “Adam was around when we first added in music. Adam was instrumental in that.”

Fitzgerald said that they decided to lighten the play with comedy and song to draw the audience in, and once they had done that, Strafford could be serious about his past.

“We tried to make it not only funny and flashy and put music in it, but also make it a piece of theater,” Fitzgerald said.

One of Strafford’s concerns with the play was that this story has been told many times before, and he said a couple of his reviews said just that. But both Strafford and Fitzgerald said the show is not just about a gay man’s addiction to crystal meth—it is about revealing the things that we hide from others because we are afraid of being hurt or not being accepted.

“What the whole show is about is the telling,” Strafford said. “It’s about the fact that no matter what you’ve done—no matter what you think is the ugliest, dirtiest part of you—whatever it is, it is not so ugly and dirty that you cannot find an outlet to talk about it.”

“Methtacular” will continue its run at the Theatre Wit, off of the Belmont Red Line stop, in Lakeview through Sept. 28. Shows are on Wednesdays through Sundays and start promptly at 7:30p.m.