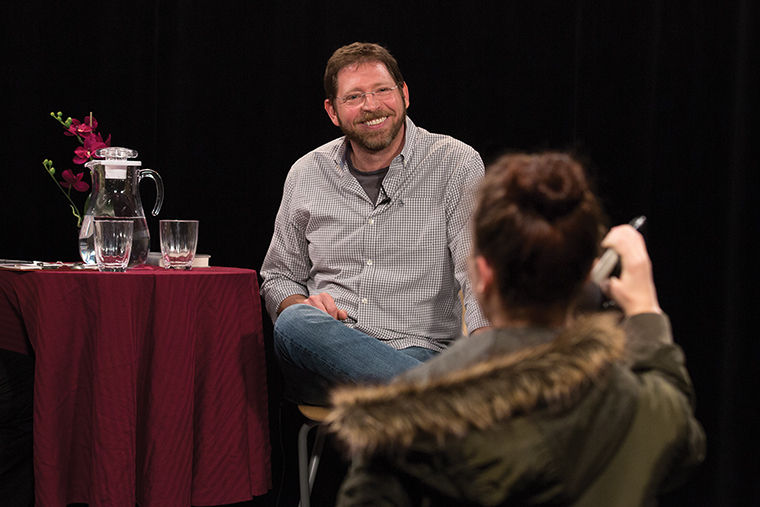 The cameras were rolling inside Studio A on April 8 as Kirker Butler, a famed animation writer, accompanied by Michael Niederman, chair of the Television Department, stepped onto the 15th floor of the 600 S. Michigan Ave. Building.

Growing up in Hartford, Kentucky, Butler said he was not known for being a class clown. The animation writer—who has written and produced several “Family Guy” episodes and has been the co-executive producer of “The Cleveland Show”—said his friends were much better at getting the laughs.

“I was kind of the assist guy,” Butler said. “I would set him up, he would get the laugh and I felt good about that.”

Butler said he came to Chicago hoping to perform at The Second City, 1616 N. Wells St. after graduating from Western Kentucky University with a bachelor’s degree in performing arts.

“I wanted to do Second City ever since I found out what it was in high school,” Butler said. “I really liked it for a while, and then I really did not like it.”

Butler said during his time at The Second City, he worked with Steve Carell, Stephen Colbert, Adam McKay and Amy Poehler.

Facing many challenges, including competition from Carell and other comedians, Butler said he left Chicago to pursue comedy through writing. He moved to Orlando and worked on projects ranging from an Arabic commercial for canned meat to set decoration for the very first ‘N Sync music video.

“I was never paid,” Butler said. “I like to tell people that Justin Timberlake owes me $500.”

Butler said it was not until he returned to his home in Kentucky that he realized his passion for television writing.

“I moved back into my mother’s basement, which is a good moment in your life,” Butler said sarcastically to the audience.

Butler said the solitude he experienced while living back at home with his mother gave him time to write. He said he wrote dozens of screenplays, specs for sitcoms, plays and short films while in Kentucky.

Butler spoke about the differences between writing for animation shows and live-action sitcoms. He said the writer holds the responsibility of ensuring the story makes sense with each show but still appreciates the creative possibilities of animation.

“With animation you can go anywhere, you can do anything,” Butler said. “The difficulty at first was opening my mind enough to where there were no limitations, and it’s been great. I’ve been really fortunate that I have not had to do normal.”

Katie Daniel, a sophomore cinema art +  science major, said listening to Butler’s stories has helped her learn about producing  television and what it means to be a writer. She said she has written a few scripts in the past but still prefers animation to writing.

“I want to do multiple things in animation,” Daniel said. “If number one doesn’t work out, number two might, number four might. That is pretty comforting.”

Tyler Schlossman, a senior interdisciplinary major, said he was excited to hear  about Butler’s experiences because he does not get the chance to meet professionals in his field of study often.

“Hearing him talk about the writer’s room was interesting,” Schlossman said. “I’ve worked on a couple of projects, and here at Columbia we try to get as close to the industry as possible, but we are all still learning.”

Butler encouraged the audience to pursue their interests in comedy, regardless of any challenges.

“Whatever you want to do, do it,” Butler said. “The money will come and the path will come. Just be true to whoever you are and it will happen.”