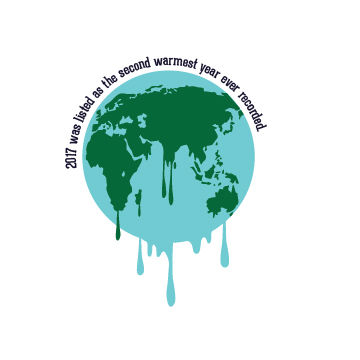 A study released Jan. 18 reports that 2017 was one of the hottest years on record, ranked as the second-warmest year by NASA and the third-warmest by the National Oceanic and Atmospheric Administration. The last six years are considered the hottest ever recorded. These statistics are proof that the earth is getting warmer and climate change cannot be ignored.

Climate change is defined as a change in global and regional patterns, which is largely caused by increased levels of carbon dioxide from fossil fuels. The presence of La Niña—which features cooler Pacific Ocean waters and is supposed to cool down the planet—was evident in 2017, according to NASA. Yet 2017’s temperatures were still near the top of the charts.

This past hurricane season was uncommonly dangerous, with several category 5 hurricanes and massive devastation in places like Houston, Puerto Rico and parts of Florida.

During the unseasonably cold holiday season on the east coast, President Donald Trump tweeted Dec. 28, “In the East, it could be the COLDEST New Year’s Eve on record. Perhaps we could use a little bit of that good old Global Warming that our Country, but not other countries, was going to pay TRILLIONS OF DOLLARS to protect against. Bundle up!”

That’s not how global warming works. It’s based on the overall climate and not what the temperature is for the day. It’s based on statistics collected over decades. Promoting this simplistic way of thinking can only hurt us. We have to accept the reality of climate change and not find excuses because it costs money to undo the damage humans have inflicted on the planet.

Why does climate change need to be so politically charged and controversial? We are all living on this earth and it’s the only place we are able to call home. It makes sense that we should protect it as much as possible. Climate change should not have to be as divisive as it is, and with the statistics shown from over the last decade, its effects are indisputable.

We need to be able to talk about climate change openly without causing outrage because we are all affected by its consequences.

Educational television spots can help bring awareness to the uninformed. We need a consensus on climate change, and we all need to work together to prevent ourselves from ruining this beautiful planet.