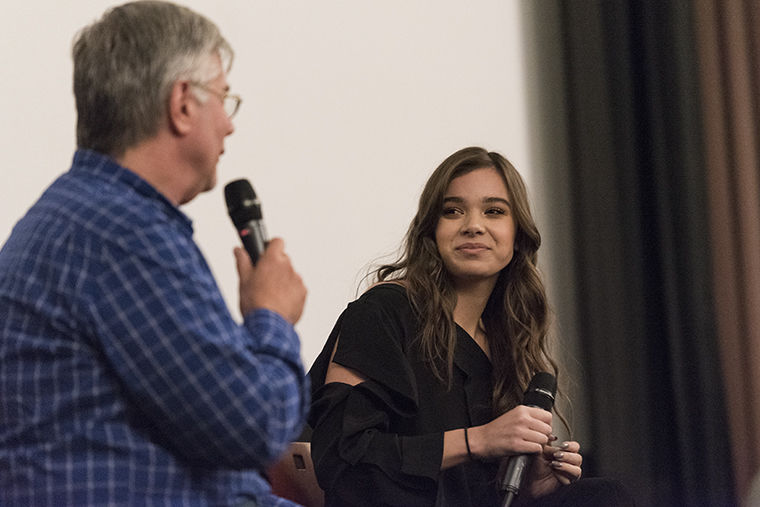 Hailee Steinfeld, who visited Columbia Oct. 24, said her new film, ‘The Edge of Seventeen,’ allowed her to express herself on camera more than any of her previous roles.

Home-schooled Film star Hailee Steinfeld never enjoyed an all-American high school experience. She chose instead to pursue an acting career that would eventually earn her an Oscar nomination.

However, the 19-year-old movie star said she finally got a chance to be a typical teenager in her upcoming movie “The Edge of Seventeen.”

“Being able to make this movie allowed me to actually be a teenager and let out every emotion I have ever had,” Steinfeld said. “There was so much in this movie I felt I could identify with.”

Steinfeld visited Columbia for an advanced screening of the “The Edge of Seventeen” Oct. 24 at Film Row Cinema in the 1104 S. Wabash Ave. Building. Ron Falzone, an associate professor in the Cinema Art + Science Department, hosted a Q&A session after the screening.

The film, directed by Kelly Fremon Craig and opening Nov. 18, is the story  of an awkward girl named Nadine, played by Steinfeld, whose only friend begins dating her popular, older brother.

The movie covers the loss of loved ones and the social difficulties of dating, all through teenagers’ perspectives. Nadine struggles with her identity throughout the film as she battles with isolation after losing her only friend.

Steinfeld said Craig researched the film by conducting multiple interviews with teenagers to learn about their experiences growing up. As a result, Craig crafted a story with struggles and challenges nearly every teenager would be able to relate to.

“We can all connect to at least one awkward moment she had in the movie,” said Ivan Salazar, a freshmen cinema art + science major who attended the screening.

Steinfeld received an Oscar nomination for her performance in “True Grit” in 2011 and has appeared in several other popular films such as “Pitch Perfect 2” and Carlo Carlei’s rendition of “Romeo & Juliet.”

Sandy Cuprisin, administrative assistant for the Cinema Art + Science Department, helped organize the event and said the packed auditorium was a result of students’ interest in seeing an actress from their generation.

Steinfeld has primarily played secondary roles in previous movies, so it was a change to see her in a lead role, said Bryan Briody, freshman cinema art + science major.

Steinfeld said this film speaks to the modern, young generation in the same way teenage movies like “The Breakfast Club” or “Sixteen Candles” did for          previous generations.

“[Teenagers] can feel like they see themselves in this movie,” Steinfeld said during the Q&A. “They can find something within somebody in the movie or in the storyline they identify with, and know that it’s okay to not to have answered every question.”